Seven recommendations for power and one… for society

APRIL 6, 2014. DONETSK. WHILE PUTIN IS PULLING THE WEST’S LEG, SAYING RUSSIAN TROOPS ARE RETREATING FROM UKRAINIAN BORDERS, RUSSIAN “TOURISTS” ON SPECIAL MISSIONS INSIDE UKRAINE ARE ROCKING THE BOAT IN THE EAST, PAVING THE WAY FOR RUSSIA’S “PEACEKEEPING” INVASION, ALLEGEDLY TO SAVE LOCAL ETHNIC RUSSIAN COMMUNITIES / REUTERS photo

“The situation has been taken under control,” “nothing of this kind will ever happen again,” “protests are declining,” current power assured after recent separatist protests that took place in south-eastern regions of Ukraine. In fact, the Security Service has detained a number of leaders of local pro-Russian movements. Moreover, it has disclosed and detained members of Russian Special Forces who operated on our territory. The Ministry of Internal Affairs has reinforced its activity. The Prosecutor General’s Office of Ukraine has launched numerous criminal cases.

In Luhansk members of pro-Russian movements called the population in a video address to support the south-eastern army they had created and continue to control the building of the SBU. 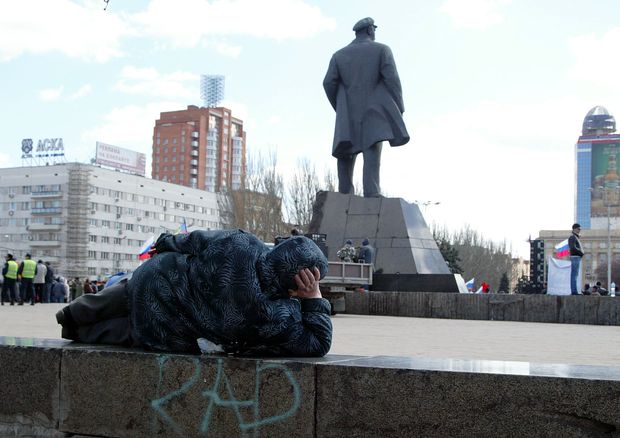 AFTER A WEEK-LONG SILENCE THE RALLIES RENEWED ON APRIL 5. LATE ON APRIL 6 PROVOCATIONS ORGANIZED BY SEPARATISTS TOOK PLACE, WHO SEIZED THE BUILDINGS OF DONETSK, KHARKIV, AND LUHANSK OBLAST STATE ADMINISTRATIONS. IN DONETSK ON THE NIGHT OF APRIL 7 THE DEPARTMENT OF SBU WAS SEIZED. CRIMINAL PROCEEDINGS HAVE BEEN LAUNCHED

And in the Donbas’s capital separatists at a special session of self-proclaimed “people’s council” declared creation of independent Donetsk republic and made a decision that the newly-created republic should become a part of Russia.

Serhii TARUTA: “The problem should be solved at the national level”

Separatists occupied the Donetsk Oblast State Administration (OSA) for the third time on April 6, and stormed the Security Service of Ukraine’s Donetsk directorate the following night. They had the occupied buildings surrounded by barricades of tires and barbed wire. On April 7, the People’s Militia of Donbas reported on Facebook: “The congress of delegates from cities of Donbas unanimously voted for the creation of the People’s Republic of Donetsk.” The separatists met in the meeting hall of the Donetsk Oblast Council, located in the OSA building.

Protesters claimed that the police guarding the building had gone to their side. Press service of the Ministry of Internal Affairs (MIA) of Ukraine’s Donetsk regional chief directorate denied it: “The police maintain their principled stance, calling on the invaders to leave the building. Donetsk police have not gone to any side, as they are on the side of the law.” Press service of the MIA’s Donetsk city directorate said that report about the occupation of the Donetsk OSA building was included in the Unified Register of Pre-Trial Investigations and described as a crime according to Paragraph 1 of Article 294 of the Criminal Code of Ukraine (civil unrest). The investigation is ongoing.

Head of the Donetsk OSA Serhii Taruta wrote on Facebook: “Donetsk, Luhansk, and Kharkiv oblasts see implementation of a scenario aimed at destroying peace and bringing social and economic instability. Obviously, this problem should be solved at the national level during an emergency meeting of the National Security and Defense Council (NSDC). This meeting should take place in Donetsk.” 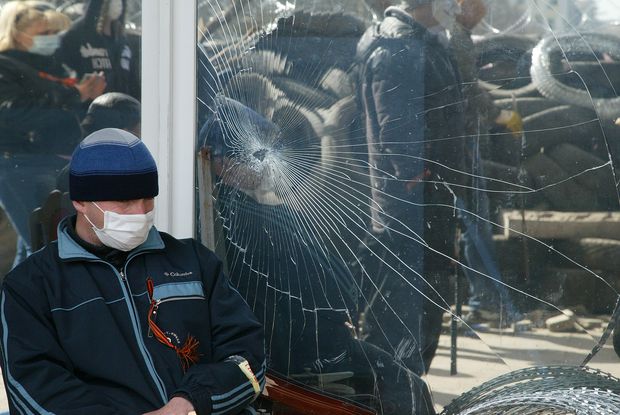 RALLIES IN DONETSK HAVE BEEN TAKING PLACE FOR OVER A MONTH. OVER THIS TIME THE SEPARATISTS HAVE SPLIT: A PART OF THEM SUPPORTS JOINING THE RF, WHEREAS ANOTHER PART IS FOR FEDERALIZATION. THE ONLY TWO THINGS THAT UNITE THEM ARE DISTRUST TO KYIV POWER AND HATRED TO SO-CALLED “BANDERITES”

It was all quiet in Donetsk on April 7. People were surprised by events of April 6, and the majority did not support the radicals. In fact, recent separatist rallies gathered less people than those at the beginning of March, no more than 5,000. However, they were very aggressive. Editor of online newspaper Novosti Donbassa received an open letter addressed by the region’s residents to the Acting President of Ukraine Oleksandr Turchynov and asking him “to investigate the reasons for indecision and sometimes complete inaction of public authorities in solving problems that involve danger to residents of Donetsk oblast, and the entire Ukrainian society... to take immediate steps to ensure the safety of Donetsk oblast’s residents.”

Deputy Secretary of the NSDC Viktoria Siumar reported on Facebook that First Vice Prime Minister of Ukraine Vitalii Yarema flew to Donetsk early on April 7. According to the Batkivshchyna party’s press service, Yulia Tymoshenko was also going to fly to Donetsk.

TIRES AND BROKEN GLASS LOOKED LIKE PART OF A FLASHMOB HELD TO REPORT TO ITS ORGANIZERS. QUESTION IS, WHO ARE THESE ORGANIZERS?

It was the evening of Sunday, April 6. Luhansk, mostly deserted in recent months, was just starting to wake up, families with children were gradually coming out on the streets, and romantic couples began to walk slowly down balmy park lanes. Nobody was surprised to see another rally of the pro-Russian forces, with employees of local enterprises forced to participate. Let them have their rally, the common attitude was. Everybody had long lost interest in one-word slogans “Russia!”, gloomy faces of brainwashed grandmas, and masks on the faces of young men who looked like former students who had failed their first semester exams.

Like many people, I was walking the streets of Luhansk that evening when a crowd standing at the Security Service of Ukraine (SBU)’s building suddenly drew my attention. Again, there would be nothing surprising in this crowd (pickets at the SBU building are fairly common events) if not for the broken doors and masked men that walked beside them. It turned out that the building had been seized after a little clash, leaving nine guards injured, that involved egg-throwing but not a single shot. In daytime, entrance to the institution was yet defended by a thin chain of guards who stood there seemingly to prove reports that it had been guarded. By the evening, the institution had been seized. It was not just your average institution, but the local office of the SBU. 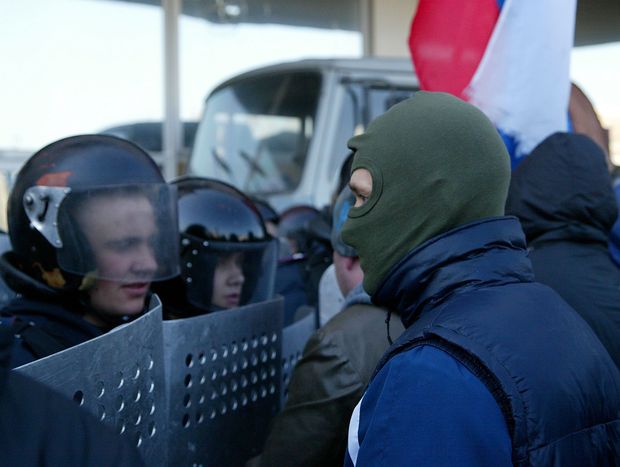 POLICE CONTINUES TO REMAIN NEUTRAL REGARDING THE PRO-RUSSIAN ACTIVISTS. YESTERDAY THEY BROUGHT A WATER CANNON TO THE BUILDING OF OBLAST STATE ADMINISTRATION, BUT THEY DID NOT USE IT

Using this unexpected opportunity to visit the SBU, I, of course, entered this ‘fortress.’ Having blended in with the crowd, I began to take pictures and ask questions: “What is it all about?” The answer was: “We have done it to free our six brethren!” Who were these? The wannabe liberators had troubles giving the names. No one knew who they had come to liberate. “Maybe, it is Klinchaiev?” I asked. “No! He belongs behind bars!” a woman said to me. We sat down on the sofas, brought water, beer, sandwiches. A man in military uniform sat at the front of the sofa. Two more men looked the same, said they were soldiers, but for some reason were not accustomed to wearing army boots. They said that all of them lived in Luhansk and were preparing to repel an assault, likely to come in two hours’ time. On that note, I put a fire extinguisher closer to myself just in case. Someone stole baseball bats from the SBU gym. I personally picked up from the floor magazines with headlines about Viktor Yanukovych and Alexander Lukashenko.

“What a good lad the general is! He is our man!” the man from the front of the sofa said, “he just asked us not to touch anything!” Doors to rooms were locked and blocked with tables. An Azerbaijani participant of the SBU occupation kept joking and when I was left alone with him, openly said he did not understand why all this was happening. “We have seized the SBU building,” he said. I pointed at the locked and table-blocked doors. “Why then is the door locked? What have you seized? Corridors?” He just laughed and kept joking. The feeling was that most of the present had no understanding of the occupation’s goal, just saying platitudes and slogans.

Meanwhile, ranks of the newly formed self-defense force were lining up in the SBU building’s courtyard, holding sticks and scattered shields. In the morning, the entrance to the building was barricaded with tires, as it was done at Kyiv’s Euromaidan. The main street of the city was similarly blocked, bringing a rare “pleasure” to Luhansk drivers early on April 7, as they faced incredible traffic problems.

The center of Luhansk looks like the stage of a strange performance. The main problem with these occupations in Luhansk is that the participants believe that the eastern Ukraine has a strong protest potential. In other words, they confuse apathetic Luhansk with politicized, active Kyiv. While in Kyiv, government buildings’ occupations aimed to paralyze the government, tires and broken glass in the eastern regions looked like part of a flashmob held to report to its organizers. Question is, who are these organizers?