Where are the promised surprises?

We heard no “new and surprising things” presidential faction representatives had announced in Petro Poroshenko’s address to the Verkhovna Rada. As always, we can appreciate the good work of speechwriters, but, judging by the speech, there will hardly be any radical changes in the approaches to the head of state’s policies. The only difference is that the address was shorter and generally comprised the main directions of Poroshenko’s upcoming election campaign. Incidentally, he did not announce, contrary to some expectations, the intention to run for the presidency again. In all probability, he will choose a different, more favorable, moment to do so.

Here are some of the president’s chief messages:

“I request you to support amendments to the Fundamental Law on irreversibility of the course towards Ukraine’s membership in the EU and NATO.

“It is proposed that the clause that allows the Black Sea to base in Ukraine be deleted form the Constitution.

“I have brought into force the National Security and Defense Council’s decision not to extend the treaty on the so-called friendship with Russia.

”Ukraine has closed its representation at the constituent bodies of the so-called Commonwealth.

“The Ecumenical Patriarch’s envoys have arrived in Kyiv to prepare a decision to grant autocephaly to the Ukrainian Local Orthodox Church.

“The National Television and Radio Council has published a report on Ukrainian-language quotas for radio stations.

“I hope you will approve innovations to military regulations, which introduce the long-awaited salute ‘Glory to Ukraine!’ – ‘Glory to Heroes!,’ by October 14, Defender of Ukraine Day.

“Each of these events confirms our break with the colonial past. Each of them is a step towards our full freedom form the empire.” 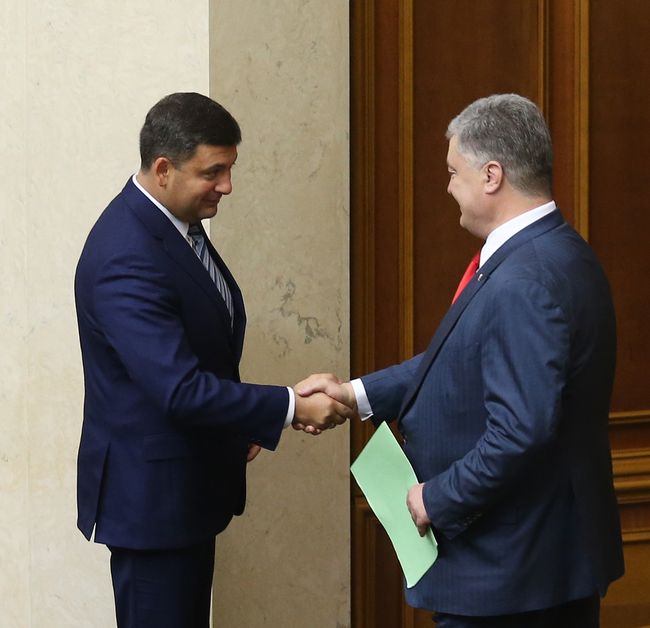 Then the president in fact further explained and supplemented the abovementioned directions, repeating the slogans written on billboards throughout the country: “Army, language, and faith are not a slogan. It is a formula of contemporary Ukrainian identity. The army defends our land. The language defends our heart. The church defends our soul.”

“Consider that you heard all the 70 minutes of Poroshenko’s speech – his address to himself, which he has failed to fulfill in the past four years,” MP Olena Shkrum writes on her FB page. “It’s interesting to watch the atmosphere in the parliament hall. MPs do not listen much and chat with one another. The present government members think about something personal. The premier cannot hide outright boredom and sometimes laughter. I can understand him. For some reason, it is mostly women from the Petro Poroshenko Bloc who listen attentively. They feel it awkward to use cell phones and take a nap, as men do. Poroshenko repeats 20 times his mantra about the army, the faith, and the language. He reads off the teleprompter: ‘We failed, unfortunately, to end the war… We failed to… – ‘Sell Roshen,’ some MPs behind me prompt. People smile. ‘Don’t smuggle capital out! Invest in the country!’ This causes a burst of laughter.”

Poroshenko did not forget about the future elections either. “As a president, I guarantee the free, fair, and democratic elections of the head of state, a new parliament, and local government bodies,” he said. Meanwhile, the latest survey data show that Poroshenko’s rating is 9.9 percent among those who have made their choice and will vote and 7.1 percent among all of the polled people (third place). As before, Yulia Tymoshenko ranks first with 18 (13) percent, followed by Anatolii Hrytsenko with 10.4 (7.5) percent.

Experts estimate that the main rivalry will be between Tymoshenko and Poroshenko, but it is not ruled out that other candidates may fray the leaders’ nerves. These are the abovementioned Hrytsenko, Yurii Boiko, and even Oleh Liashko, to say nothing about showman Volodymyr Zelensky and singer Sviatoslav Vakarchuk if they choose to run in the race.

Coming back to the president’s speech, we can note another particularity which still remains crucial. “How many nice words which run counter to reality and disguise the desire to defeat opponents and remain in power at any price!” MP Taras Batenko wrote in a social media.

How do experts appraise the president’s Address to the Verkhovna Rada “On the Internal and External Situation in Ukraine in 2018?” 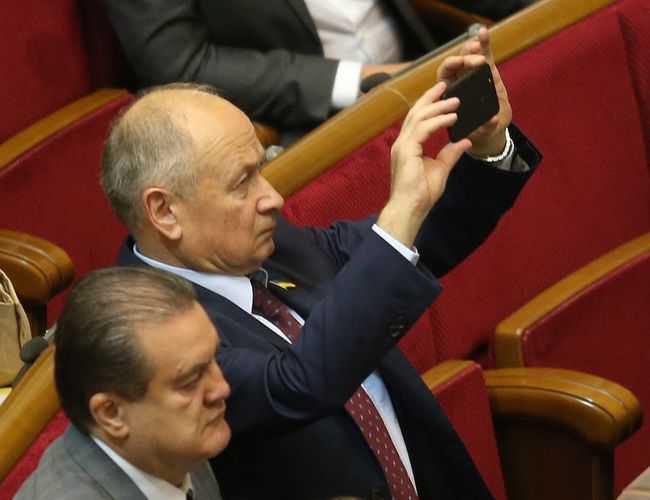 “TO SOME EXTENT, THE SUBJECT OF REFORMS AND THE ECONOMY, HAS RECEDED TO THE BACKGROUND”

“This is a pre-election statement, rather than a presidential address. He in fact voiced his main election messages. We can see that emphasis will be put on patriotic rhetoric, face-off with Russia, and the religious question. I think all of these things will be reflected in the president’s election program and further statements. To some extent, the subject of reforms and the economy has receded to the background, but we heard some symbolic promises the fulfillment of which the president will not have to account for. For example, he called Russia Muscovy – this political position is of great symbolic importance and shows that the president is resisting the aggressor. He did not say whether he would be running for the presidency, maybe, because his team is so far afraid to make a false start. For if he announces his participation in the elections, his nest steps will proceed from this only. But now he can maneuver and does not afford grounds to speak that he does not fulfill his presidential duties.

“The step towards constitutional amendments, as far as European and Euro-Atlantic integration is concerned, is also a political positioning. But it should not be forgotten that these amendments are not a mandatory condition for joining NATO. Integration into this organization is impossible without the consent of the Alliance itself and the political will on the part of the Ukrainian leadership. Of course, the populace should take a positive attitude to this and certain standards are to be met. However, making certain changes to the Constitution will not guarantee a political will or inevitable admission because power constantly changes in Ukraine, as do the priorities. Accordingly, any decision can be revised. We can remember the way constitutional reform was canceled under Yanukovych. Figuratively speaking, if Boiko becomes president tomorrow, nothing will prevent them from revising constitutional changes. I think NATO is also very well aware of this. Therefore, by all accounts, this decision carries nothing but the president’s declarations.”

“I APPRAISE THIS MESSAGE POSITIVELY”

“The speech was rather short – up to an hour, which is good for perception. It is also positive that the president spoke about his shortcomings because others usually emphasize their achievements. By all accounts, the clear-cut statements we can see on billboards – ‘Army, Language, Faith’ – also occurred in the speech, which shows accents in the domestic policy. On the whole, I appraise this message positively. I feared that the speech would be the beginning of the president’s election campaign, but this did not happen. And this is good.”

“ON THE WHOLE, I AM DISAPPOINTED… HE COULD HAVE DONE MORE IF HE WERE A PRESIDENT, NOT A BUSINESSMAN IN THE OFFICE OF PRESIDENT”

“I heard the president’s address to parliament. Where are the promised surprises? It’s one of the many pre-election speeches of a presidential candidate in front of the TV and radio audience with subtle jibes against other presidential candidates. Nothing new – just a list of his own achievements and general words about long-term strategic goals! Everything has been said hundreds of times. Even the figures of speech are the same. There are neither concrete things about the Donbas (except for the claim that there is no alternative, as before, to Minsk) nor any prospects for the liberation of Crimea. But there is a warning that UN peacekeepers should be stationed throughout Ukraine.

“There are also some alarming tendencies. He speaks of democracy, but, judging by the number of times he mentioned the Tomos, the impression is that those who do not go to church (any church) will soon be pronounced agents of Moscow. The same applies to those who speak Russian. It’s a clear misconception of patriotism and nationalism. I favor the official status of the Ukrainian language and autocephaly of the Ukrainian church, for Ukraine will not exist without this. But if the state puts the factors that differentiate us from other countries and peoples above the economic wellbeing of people and common human values, this state is doomed to self-isolation and self-destruction. The point is that this works in wartime, but you can’t possibly fight eternally. People get tired of a war that has no prospects of victory. But we are talking about war but not even striving for victory – neither in the Donbas nor in the economic battles with Russia. This is why the military do not see the reason why they are stationed there, while trade turnover with the aggressor is growing.

“The Opposition Bloc and Poroshenko are telling us about peace without victory and war without victory, respectively. Not exactly rosy prospects… This is why people are leaving this country. ‘Do the oxen bellow, when their mangers are full?” Those old women in Luhansk and Crimea wouldn’t be running about with Russian flags in hand, if pensions in Ukraine were higher than in Russia. But we, instead of ‘filling the mangers,’ are adorning them with patriotic slogans. On the whole, I am disappointed. Poroshenko is perhaps not the worst president. He must have done very much. But he could and was to have done much more if he were a president, not a businessman in the office of president.”