MP: “Today we can already speak about the Special Operations Forces having been established as a combat branch, although its formation has not yet been completed”
Ivan Kapsamun

The Special Operations Forces (SOF) of the Ukrainian Armed Forces (UAF) will be compatible with the NATO SOF. Chief of the UAF General Staff Viktor Muzhenko announced this on Facebook on March 21. “I have agreed with Vice Admiral Colin J. Kilrain, Commander of the NATO Special Operations Headquarters (NSHQ), to intensify the work on the further development of our SOF,” he added.

The Ministry of Defense’s website also released the news that during the meeting, Army General Muzhenko informed foreign partners about the continuing development of the UAF SOF, which takes into account NATO member countries’ experience and relevant standards. The parties discussed the state and directions of further cooperation between the SOF Command of the UAF and the NSHQ.

Going to the dedicated website of the Ministry of Defense (sof.mil.gov.ua), we find out that “the SOF is the youngest and most modern component of the UAF. They are the military elite of the nation. Our credo is ‘quality over quantity.’ The SOF is a branch which has had no analogues in the history of modern Ukraine. Our operatives are taught to serve as intelligence agents, take part in raids into the enemy’s rear areas, conduct underground work beyond the frontlines, and create intelligence networks, perform the search and evacuation of prisoners or hostages, anti-terrorist activities, and provide medical assistance. The new branch differs from others not only by high requirements it sets for prospective servicemen, as only 10 percent of candidates end up selected by the SOF, but also by personnel training. The new SOF units get only highly motivated, stress-resistant and experienced soldiers.” 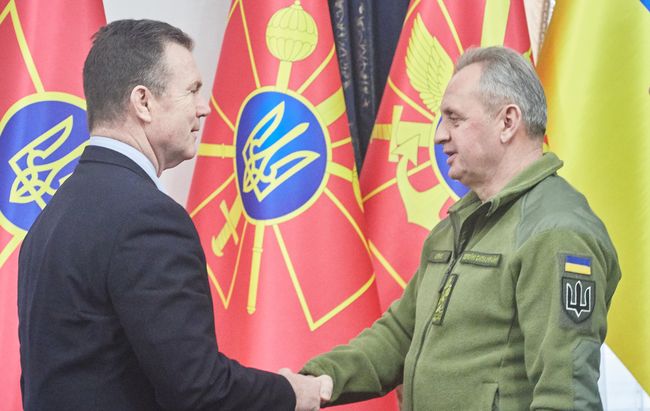 “Tasks of the SOF:

• Participating in combating illicit traffic in weapons and drugs.

Also, the website offers its users “to prepare for the entry exam according to an instruction developed by the US SOF” and provides a step-by-step manual on preparing for the training course.

We have long heard that this country needs to create the UAF SOF. What is the current condition of the SOF, and what does compatibility with similar bodies of the North Atlantic Alliance mean? The Day obtained comments from member of the parliamentary committee on national security and defense Dmytro TYMCHUK.

“The entire legislative framework for the SOF was developed and adopted quite a long time ago, for it happened last year,” he commented for The Day. “The SOF were not created from scratch. Their core is made of the deep reconnaissance SOF units, that is, the forces of the Main Directorate of Intelligence (MDI) of the Ministry of Defense. That is, the potential was there, but some structures had to be created from scratch. For example, the Center for Information and Psychological Operations, or the SOF Training Center in Berdychiv, located on the premises of the former School of Warrant Officers. There were issues with financing and construction there at first, but they got resolved and today these structures function fully. Consequently, today there are no pressing issues, and most definitely there are none regarding the legislative framework for the SOF.

“As far as functioning is concerned, these units already exist. They conduct active combat training, building on their extensive experience of participation in the anti-terrorist operation. That is, we can already speak about the SOF having been established as a combat branch, although its formation has not yet been completed, and some issues remain with regard to weapons and technical support. They should not be issued regular weapons and supplies, because the SOF are entrusted with special tasks. The same applies to the training methodology. It was developed by Ukrainian specialists on the basis of an extensive study of the experience of our NATO partners.

“Now let us turn to the compatibility with the NATO SOF, which was asserted by the chief of the General Staff. Again, given that the SOF were not created from scratch, it should be noted that the MDI SOF were quite active previously in joint exercises and competitions involving the relevant structures of NATO countries, both on land and on sea. By the way, representatives of the Alliance’s member countries have always noted the high training level of Ukrainian soldiers. Accordingly, the issue of compatibility between our units and their counterparts in NATO countries arose much earlier. And the SOF, as a new structure, should also move towards compatibility with similar structures of NATO countries, especially given that we have declared our Euro-Atlantic aspirations.

“Concerning the task of ‘protecting lives of Ukrainian citizens and state property assets outside Ukraine,’ it is worth noting that back in the 1990s, Ukrainian embassies abroad were guarded by the SOF of the Security Service of Ukraine (SBU). Accordingly, if a need arose to carry out some operations for the protection of our diplomatic or consular offices abroad, the SBU SOF were involved. However, Ukraine then amended its legislation to bring it in line with the civilized world, and so the SBU, as an internal security agency, became limited to conducting its operations only within this country. Accordingly, these functions were entrusted to other structures, in particular the MDI SOF, who were assisted by the Foreign Intelligence Service, although the latter agency’s military component was weaker. Given that the MDI SOF units have been separated from its parent body and included into the new SOF, it is quite logical that these functions will now be performed precisely by this new structure.”