The Public Broadcasting Company has been launched in Ukraine

Petro POROSHENKO: “Ukraine waited 23 years for this law to be enacted”
Anna Sventakh

The Public Broadcasting Company has been launched with great fanfare in Kyiv. The presentation was held at the Mystetsky Arsenal, with “the great and the good” of the country and European delegates in attendance. President Petro Poroshenko signed into law the bill “On Amendments to Certain Legislative Acts of Ukraine on Public Television and Radio Broadcasting of Ukraine” live on the First National TV channel, still in operation then, and in a few minutes the channel changed its logo to “UA: The Public Broadcasting Company.”

So far, the differences between the two have been more of cosmetic than contextual nature. The managers presented to the audience the already existing TV programming that has moved from the defunct First National to UA: The Public Broadcasting Company, and announced a new show, Olha Herasymiuk’s “Travelers.” Meanwhile, the new radio had high standards introduced from the start, as the first talk show’s hosts conducted it in English, communicating with European delegates. “All our channels [there are two TV and three radio channels to the Public Broadcasting Company. – Author] will focus on promoting culture and educating, I would even say enlightening, people. We will eliminate corrupt journalism practices, negativism and sensationalism very quickly, should they appear at all. However, we will need more time to effect the modernization of this structure,” Zurab Alasania commented for The Day while still CEO of the First National TV. The Public’s features will be paying more attention to explaining reforms, acquainting the public with Europe by the means of TV, showing more of top-quality high culture products, and addressing society’s needs and pressing issues instead of listening to politicians and populist slogans. 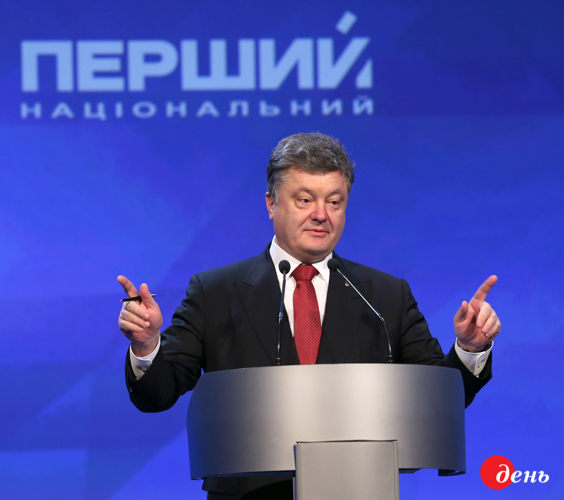 Expectations and requirements for the Public Broadcasting Company run high, with the citizenry as well as the president. “Ukraine waited 23 years for this law to be enacted,” Poroshenko said on signing the document. “The authorities often lacked the will and almost always had no desire to do it, because they always wanted to control the media space and felt that a public TV would release the genie out of the bottle. This is the price that the authorities have to pay if they want to be seen as democratic... We are starting on a very encouraging path from the First National TV to the BBC.” While creating Ukraine’s public broadcaster, people have repeatedly cited standards and values of its British counterpart wishing them to be adopted by the Ukrainian broadcaster. Still, as The Day’s editor-in-chief Larysa Ivshyna said a whole decade ago, “before creating another BBC, one must create another Britain first.”

So far, the “Ukrainian Britain” is being created on the grass-roots level from below through efforts of active members of civil society. “I see the public broadcaster as the people’s voice. For years, it was the rich and the powerful who talked, while people just listened and accepted what they heard,” the Major Archbishop Emeritus of the Ukrainian Greek Catholic Church Liubomyr Huzar said in a video shown at the presentation. “We will finally see the people speak. Conscious citizens will take responsibility for what will be said to us on the radio or TV. This is a great step forward. The people is taking responsibility for its own destiny.”