A quarry of special attention

Explorers discover 65 bird species in a unique location in Dnipropetrovsk oblast. Now they are improving the living conditions for them
Petro Chehorka

The international scientific-educational competition “Quarry Life Award,” organized by the world renowned company HeidelbergCement, has been held for the third time this year. Its main purpose is to increase our awareness of the biological versatility in the quarries and help to enhance it. At the previous stages (2012 and 2014) the Ukrainian participants were phyto-cultivating the quarries, developing the methods of introduction of rare plants to the area, using the quarries as an element of ecological upbringing and education of the youth.

In 2016 the competition embraced 69 quarries in 22 countries of Europe, Asia, and Africa. Three out of five Ukrainian projects are realized on the territory of Dnipropetrovsk oblast in Rybalsky quarry. Since this spring a team of Dnipro ornithologists has been implementing the project “Enhancing bird versatility in the Rybalsky quarry.” Ornithologist Volodymyt Syzhko said, “The Rubalsky quarry is well known in the world because the so-called ‘Mandrykivka layers’ were discovered here: the fossils of the inhabitants of ancient seas, like corrals, shellfish, ancient fishes, which are millions of years old. Its meaning as a sort of natural oasis, where owing to the processes of self-restoring, ‘new life’ is being formed, has not been in the focus of ecologists’ attention. But this is a special place on the landscape map of the oblast. Located on the flat left bank of Samarska creek, the quarry with its ‘mountainous landscapes’ resembles a rocky area.”

“According to our team, the goal of the project is to increase the habitat conditions for the birds. Starting to work in April, we evaluated habitat condition of the birds and were pleasantly impressed. It turned out that in spring and in summer you could meet 65 species of birds, with 42 species nesting here. In the clay precipices, colorful bee-eaters, sand martins, kestrels, and European rollers, which have been listed in the Red Book of Ukraine, make their hole-nests. Two species of wheatears make nests in the piles of stones. One of them, pied wheatear, is spread here exclusively due to stony biotopes. The quarry is a place where owlets and nightjars, which are mostly active in the nighttime, live. One can meet there the four-legged inhabitants, like foxes, hairs, and several species of bats. 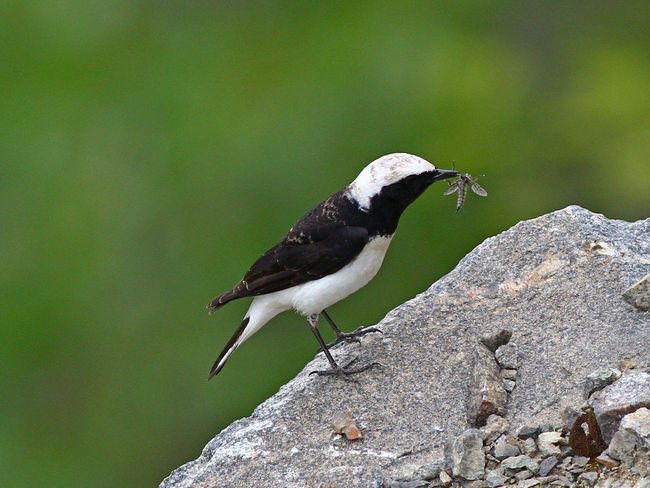 “The conditions of water supply in the quarry are far from best. Back at the beginning of its activity, the team found the permanent source of water, actually a barely visible thin streamlet running down a rock. In July, after cleaning and deepening works, they managed to make a small water reservoir and reinforce its walls. The birds got a wonderful drinking place. Incidentally, the water is drinkable for people too.”

Viacheslav Kaistro, a member of the project team and wildlife photographer, in search of his bird “models” traveled across the Azov coast and the Carpathian woods; he has been to the Danube delta and in Polissia region. His portfolio features over 200 species of birds, including the rare ones, such as fish hawk, snake eagle, lesser spotted eagle, peregrine, and even great spotted cuckoo (a rare migratory species of fauna of Ukraine). Viacheslav took an active part in the realization of the project at all of the stages (not only as a photographer) and he shares his impressions, “I didn’t expect to find in the quarry, located six kilometers away from the center of megalopolis, such rich bird population. This is an absolute paradise for a photo hunter. One can see over 30 species of birds during one tour. I remembered the most the hours dedicated to taking photos of the pied wheatear. It nests on the rocky slopes of the quarry, and it was quite difficult to take a photo of the bird, in spite of quite densely populated habitat. I think our efforts aimed at increasing the versatility of the birds should bring essential results for the nature. The Rybalsky quarry will remain in the focus on my attention in the future.”

For further information about birds in the quarry, a bright poster and an original coloring book have been published. Tours for the schoolchildren of the local center are planned for the near future. The question of including Rybalsky quarry as a separate cluster in the regional landscape park “Dnipro Rapids” in the future is being considered at the moment.