On the new symbols of Ukrainian-Russian relations
Maria Prokopenko

“You must also have a friend in hell,” a Ukrainian saying claims. But if somebody turns your life into hell, you will hardly call him friend. A discussion about the Peoples’ Friendship Arch in Kyiv recently unfolded in Facebook. It will be recalled that it is about a sculptural composition in honor of the “reunification of Ukraine with Russia,” as the agreement adopted at the Pereiaslav Rada in 1654 was called. It was first planned to time the monument to an anniversary of the formation of the USSR, but, after all, it was done on the eve of the 65th anniversary of the 1917 October coup, i.e., in 1982.

The attitude to the monument was ironic well before Russia’s aggression against Ukraine. He was popularly known as “rainbow,” “yoke,” and “monument to the cyclist.” Another variant, “bread roll,” suggests that what is now left of that friendship is, to quote a Ukrainian idiom, the “hole of this roll” (i.e., “big zero”).

Serhii Moruhin wrote in Facebook the other day: “I suggest that the Arch of Friendship be cut and drawn apart until the Donbas is liberated and Crimea is returned. Likewise, the arc should be symbolically reconnected after the return of Crimea, but the seams should remain for future generations to remember. It would be very symbolic and politically correct. This would turn into a monument to the crimes of Putin’s regime, perfidy, and aggression. We could put on an exposition on Russian aggression, show photos of the killed, hold exhibits-seminars of sculptors, and all kinds of memorial events under the arch. This would remind the strolling tourist of the war.” 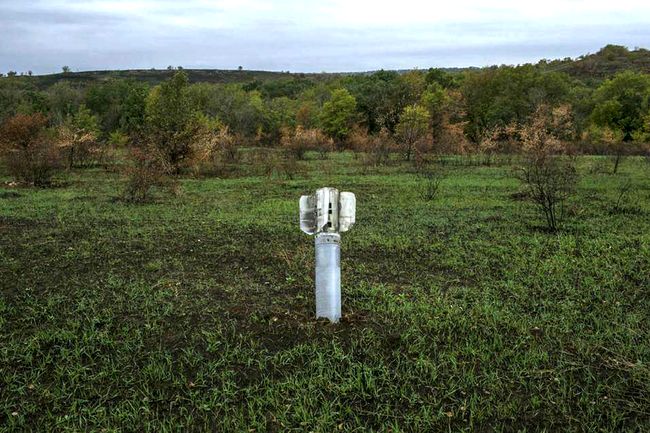 THE MONUMENT TO THE UKRAINIAN-RUSSIAN FRIENDSHIP /     Photo by Yevhen STEPANENKO

In the comments, some reflect on the current relations between Ukraine and Russia, and some are giving half-serious technical advice on how to revamp this monument. Volodymyr Viatrovych, director of the Ukrainian Institute of National Remembrance, posted the collage “A True Monument to Ukrainian-Russian Friendship” – it shows a piece of the arch destroyed by an artillery shell. This image, as well as the discussion as a whole, resemble Yevhen Stepanenko’s photograph The Monument to the Ukrainian-Russian Friendship at the Den’s 18th International Photo Competition. The grass, trees – the landscape somewhat looks like the Kyiv hills, although it is in fact the Donbas. And, in the foreground, there is a huge projectile, a “greeting” from terrorists. It is not a photoshop. The author is a nameless Russian “invisible soldier.”