The triumph of mind

The new discovery by NASA as a chance to conquer space

For centuries there has been a proven method of distraction – those seeking to distance oneselves from the pressing everyday problems should just look at the starry sky. The grand spectacle of infinite space makes it easier to withstand temporary difficulties and inconveniences of our lives. Space is the realm of inconceivable vastness, incredible energy, and infinite time. Universe is attractive to us because it gives us a possibility to comprehend the infinite, and thus hope for the omnipotence of our mind.

On Wednesday, February 22, 2017 NASA held a press conference on the discovery of new exoplanets. It took merely a day for the media, eager for simple and good news in times of the chronic crisis, to inflate almost a sensation from this. Amid the hype, many expected as much as a report on discovery of new life forms or alien contacts.

However, even for an inexperienced yet careful observer, everything has been quite predictable, as NASA scientists used the conference to present their publication in Nature (Michael Gillon et al. “Seven temperate terrestrial planets around the nearby ultracool dwarf star TRAPPIST-1,” Nature, No. 542, pp. 456-460, (February 23, 2017)) that reported the discovery of four planets orbiting the TRAPPIST-1 star, which is located in the constellation of Aquarius at a distance of 39.5 light years from the Sun. Therefore, adding the three previously discovered planets around this star, the system becomes the biggest exoplanet system currently discovered.

However, this important part of the message is that three out of four new planets have characteristics similar to those of terrestrial planets and are located in the so-called habitable zone, which allows for theoretical possibility of life on them. 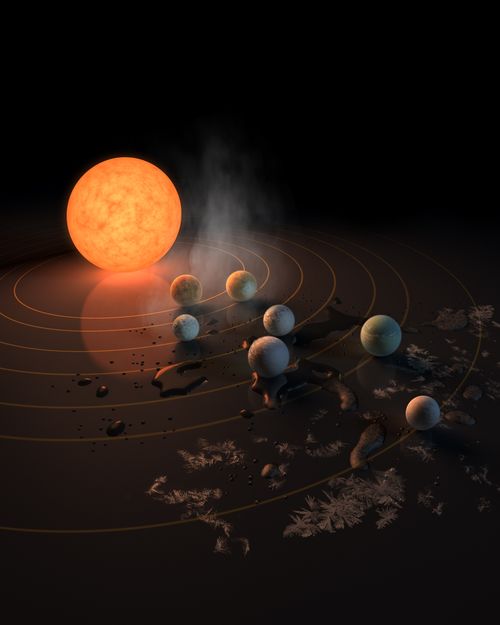 TRAPPIST-1 is a weak, cold 18th-magnitude star – a red dwarf (cataloged as 2MASS J23062928-0502285), which got its name from the telescope through which it was studied in great detail: TRAnsiting Planets and PlanetesImals Small Telescope. The telescope is located at the ESO Observatory of La Silla in Chile. Further study of the star and the confirmation of the existence of the first three planets have been performed through infrared Spitzer Space Telescope in May 2016, and the discovery of the next four ensued later that year. The discovery was also confirmed by observations of British UKIRT infrared telescope and ESO’s Very Large Telescope.

Huge distances in our universe should be not a barrier, but a challenge to the mind. It is impossible to directly observe even the outlines of individual stars, but it does not prevent us from discovering and studying their planetary systems. The development of tools, namely extra-atmospheric astronomy, and the advent of new research methods led to exoplanets being discovered quite often: there are now more than 3,500 officially confirmed planets and over 4,500 awaiting confirmation. Of them, 44 are considered potentially livable.

There are several methods for the discovery of planets around other stars. The most common is the so-called transit method, based on observations of changes in brightness during the planet’s passage against the star. It allows to determine the size, and in combination with other methods – the density of the planet, and can provide information about the existence of the atmosphere and its composition. This method has contributed to the discovery of 2,608 exoplanets, more than 76 percent of presently known. A further 19.5 percent of the known exoplanets were discovered using the Doppler method (a.k.a. radial velocity method), based on spectrometric measurement of radial velocity of a star in orbit around the system’s relative center of mass. The remaining 4.5 percent of extrasolar planets were discovered using other indirect methods and their hybrids, of which dozens are used today.

It was the transit method that helped discover TRAPPIST-1 system.

The study revealed that the new planets are very similar to Earth in size (from 0.62 to 1.34 Earth’s diameter and from 0.91 to 1.27 Earth’s mass), but are much closer to their star than the Earth to its (they are within the range of 0.1 to 0.6 of Earth’s distance to the Sun). Also planets happen to be very close to each other. The star itself is very small, and objects of this class are the most common in space – 20 of 30 closest stars to us are red dwarfs. TRAPPIST-1 exceeds the size of Jupiter by only 11 percent, but is 84 times heavier.

The discovery, as this often happens, has raised many questions and opened up perspectives for further research. In particular, the interesting question remains on how stable are the orbits and planets themselves in such close proximity between them and to the star. Probably, the orbits are in resonance, similar to the moons of Jupiter, and that resonance ensures stability.

Another likely hypothesis today is that the planets had been formed at a greater distance, but during the evolution of the system they migrated close to the star. This means that there can be water, and thus the probability of life detection is non-zero. It is also interesting to know whether these planets have atmospheres and what are they composed of.

Actually, the most important fact of this discovery is the detection of a seven-planets system. Now we know that such worlds do exist, and we should explore them, particularly with the employ of the new space telescope JWST (James Webb Space Telescope), which is scheduled to launch in October 2018.

In 20 recent years we have developed new technologies and new research methods that allow us to study not only invisible, but unobservable. This is an important result of our scientific progress, even though the object of our research might not be physically accessible so far.

Universe is the realm of huge distances. To conquer them in a reasonable time, one must learn to handle enormous energies. Each new discovery, every question that has found its answer, brings us closer to being able to start our journey to infinity, our way to comprehend ourselves in the infinite universe, to the daily triumph of human mind.