What steps are needed to pull Ukraine out of the World’s least competitive countries?

Sergiy Rybalka, Chairman of the Verkhovna Rada Committee on Financial Policy and Banking

Should we rejoice at the doubtful “victories” of Ukraine in the Doing  Business ranking ? Let’s look at our positions in another important world ranking.

At the end of September 2017, the World Economic Forum (WEF) released the Annual Report “The Global Competitiveness Report 2017-2018” that includes data profiles for 137 countries.

Ukraine ranked 81st in the overall ranking this year. Institutions (118th), macroeconomic environment (121st) and financial market development (120th)are the pillars through which Ukraine remains in the group of the world’s least competitive countries.

These factors allow us to assess the results of reforms carried out in the financial sector. 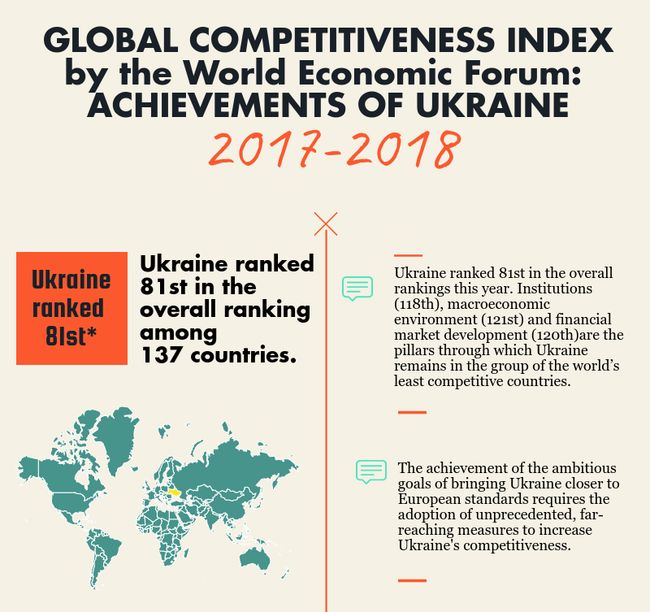 The situation with institutional development has traditionally been recognized as a key problem for Ukraine. Ukraine ranked 118th on the pillar “Institutes”. 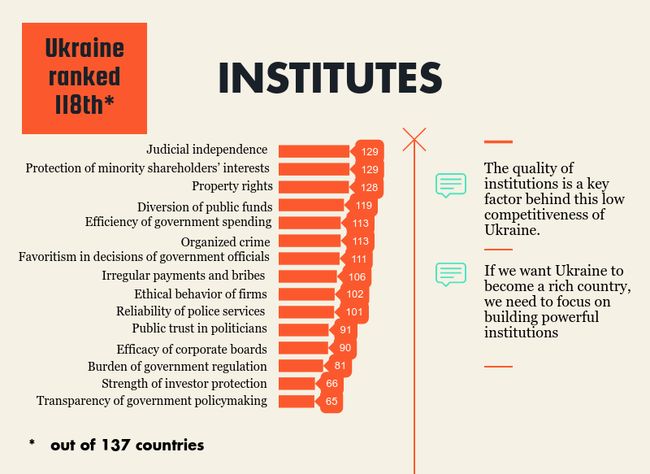 Thus, the quality of institutions is a key factor behind this low competitiveness of Ukraine. We will not be able to make any progress in the economy until we fundamentally improve the governance.

Jeffrey D. Sachs, a prominent American economist and statesman, who for some time was the main methodologist of the WEF, responsible for assessing the competitiveness of the countries, noted that the nations that have institutions and policies that promote growth in the long run are competitive.

• the predominance of private property ownership and its protection;

• effective state institutions that have a low level of corruption;

• a democratic political system with a high level of political competition;

• reliable control mechanisms over the state and bureaucracy;

If we want Ukraine to become a rich country, we need to focus on building powerful institutions, rather than on the assignment of state posts. There is no need to believe in the next messiah. There is a need that the system works. In doing this, we are assisted by the governments of developed countries, international institutions. Nevertheless, we are moving very slowly. And in many spheres, we are moving in the opposite direction to our goal. For example, total corruption in law-enforcement agencies kills all hope for economic development. 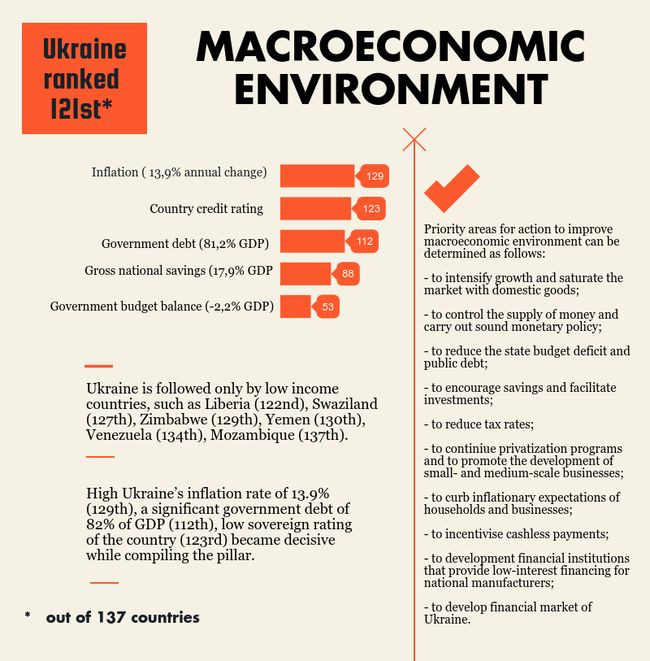 Ukraine's economy has not recovered since deep financial and economic crisis of 2014. Capital outflows are observed, with focus being on capital preservation or profitability. The is a growing shadow economy in Ukraine.  The monetary system does not function normally. Banks are not lending to the manufacturers like they should.

High inflation has damaging social consequences. According to J.M.Keynes “by a continuing process of inflation, government can confiscate, secretly and unobserved, an important part of the wealth of their citizens”.  Thus, inflation drops the living standards of all segments of the population, increases stratification and social tension in society.

In fact, keeping inflation under control is not only task of the National Bank, but also of the Government and other authorities.

Priority areas for action can be determined as follows:

- to intensify growth and saturate the market with domestic goods;

- to control the supply of money and carry out sound monetary policy;

- to reduce the state budget deficit and public debt;

- to encourage savings and facilitate investments;

- to continiue privatization programs and to promote the development of small- and medium-scale businesses;

- to curb inflationary expectations of households and businesses;

- to develop financial market of Ukraine.

The result is not surprising. During the period from 2014 to 2017, there occurred a rapid redistribution of property, bank nationalization, as well as the deterioration of the banking system. The number of banks has halved: from 180 at the beginning of 2014 to 90 at the end of June 2017, among them the number of private banks with Ukrainian capital dropped from 148 to 59.

Due to the annexation of the Crimea and the occupation of Donbas, the withdrawal of banks from the market and the bank structure optimization, the number of structural units of banks decreased from 19.3 thousand at the beginning of 2014 to 9.8 thousand by the end of June 2017. 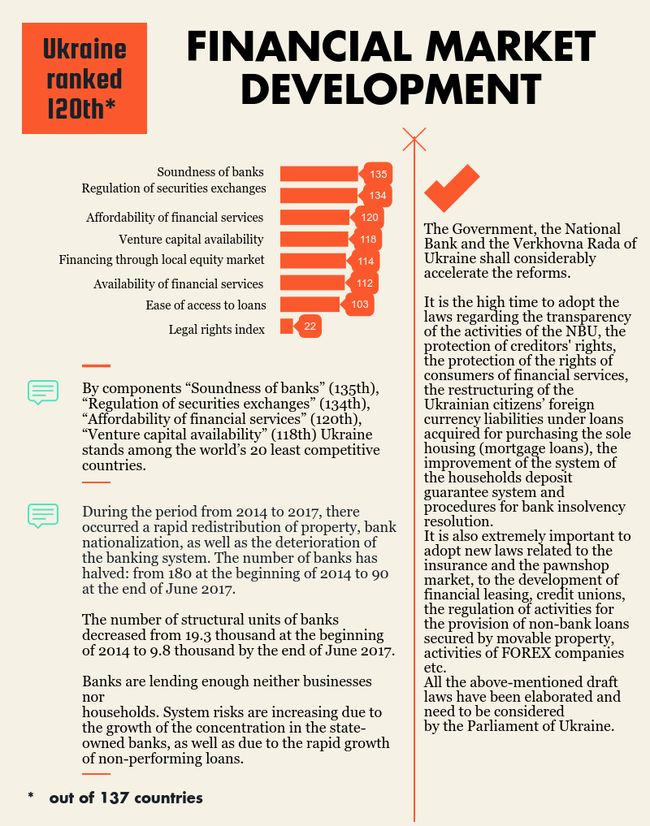 Banks are lending enough neither businesses nor households. System risks are increasing due to the growth of the concentration in the state-owned banks, as well as due to the rapid growth of non-performing loans.

Therefore, the Government, the National Bank and the Verkhovna Rada of Ukraine shall considerably accelerate the reforms. It is the high time to adopt the laws regarding  the transparency of the activities of the NBU, the protection of creditors' rights, the protection of the rights of consumers of financial services, the restructuring of the Ukrainian citizens’ foreign currency liabilities under loans acquired for purchasing the sole housing (mortgage loans), the improvement of the system of the households  deposit guarantee system and procedures for bank insolvency resolution. It is also extremely important to adopt new laws related to the insurance and the pawnshop market, to the development of financial leasing, credit unions, the regulation of activities for the provision of non-bank loans secured by movable property, activities of FOREX companies etc.

All the above-mentioned draft laws have been elaborated and need to be considered by the Parliament of Ukraine. Without these reforms, the development of the financial market is considered to be impossible.

Unfortunately, despite the considerable natural and human resources, scientific and technical potential, Ukraine demonstrates an extremely low competitiveness. The achievement of the ambitious goals of bringing Ukraine closer to European standards requires the adoption of unprecedented, far-reaching measures to increase Ukraine's competitiveness.