When friendship is gone

What should we do about the Great Treaty with Russia?
Ivan Kapsamun

Sketch by Viktor BOGORAD, special to The Day

As of late, the discussion has intensified on whether it is necessary or not to denounce the so-called Great (Basic) Ukrainian-Russian Treaty. Its full title is as follows: the Treaty on Friendship, Cooperation, and Partnership between Ukraine and the Russian Federation. Having attacked Ukraine, unleashed the war and occupied part of our territory, the Kremlin has violated the treaty. Here is the applicable Article 2: “The High Contracting Parties, in accordance with the provisions of the UN Charter and obligations under the Final Act of the Council for Security and Collaboration in Europe, shall respect each other’s territorial integrity, and confirm the inviolability of the borders existing between them.” The treaty was signed on May 31, 1997.

Of course, Russia has violated not only this document, but also other international legal acts, like the Budapest Memorandum. However, it is the Great Treaty that forms the basis of our relations with Russia. Accordingly, the question arises: why Ukraine has not yet denounced this document? “We must demand that Russia comply with it instead of terminating it, because this legal act prescribes respect for the territorial integrity and sovereignty of Ukraine, respect for internationally defined borders, which include the Donbas and Crimea,” First Vice-Speaker of the Verkhovna Rada of Ukraine Iryna Herashchenko said lately. She also added that she was “shocked” by politicians who advocate for Ukraine to be the first to abandon this treaty, “so that no law would operate, and we would give up the Donbas and Crimea by ourselves.”

Meanwhile, there has already been reaction in Moscow. Russian mass media have spread the words of the first deputy chairman of the Russian Duma’s Committee for the CIS Affairs, Konstantin Zatulin, who proposed to revise the Great Treaty between the two countries. In particular, the United Russia legislator believes that the part of the treaty which refers to the recognition of the territorial borders of the two countries provides a “unilateral advantage” to Ukraine. Zatulin emphasized that when ratifying the treaty in 1999, Russia confirmed Crimea and Sevastopol in Ukraine’s ownership. Continuing in his trademark jesuitic and cynical way, he stated: “Our interpretation of the treaty is that recognition of borders is linked to friendship, cooperation, and partnership. That is, when there is no friendship, it offers a pretext to revisit all the issues, including that of borders.” This is despite the Ministry of Foreign Affairs (MFA) of the Russian Federation stating as recently as in June 2017, on the occasion of the 20th anniversary of the Great Treaty: “the very existence of this document is a guarantee of the presence of a foundation for the revival of bilateral relations.” 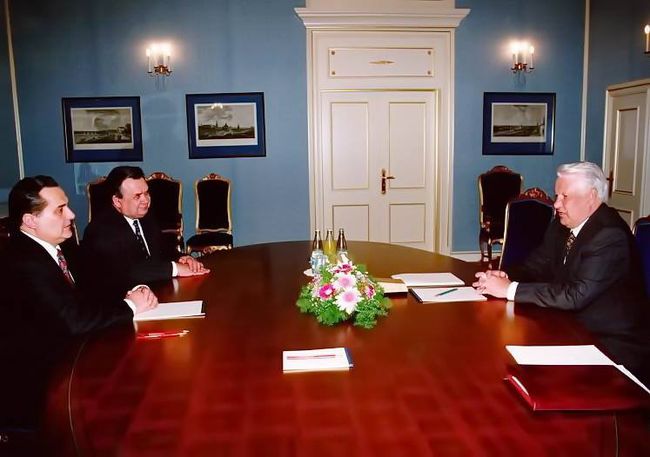 April 18, 1995. At a meeting with Prime Minister of Ukraine Yevhen Marchuk in Moscow, Russian President Boris Yeltsin confirmed the validity of the initialed treaty between Ukraine and Russia. Instead of scheduled 20 minutes, the conversation took as long as 40 minutes. The Ukrainian side preserved intact Article 2, which states that “the Parties... shall respect each other’s territorial integrity, and confirm the inviolability of the borders existing between them” /  Photo from Yevhen MARCHUK’s private archive

We will see whether Russia will take further real steps to effect such a special unilateral denunciation. A claim has been made. It is important what will be the official position of the Ukrainian authorities, after all. We were told at the MFA of Ukraine that they planned to hold a press conference in the near future and explain their position to journalists. However, we find an earlier statement to the media by the then Deputy Foreign Minister Vadym Prystaiko, made in December 2016, in which he, like Herashchenko, remarked (ukrinform.ua): “The so-called Great Treaty on Friendship, Cooperation, and Partnership between Ukraine and the Russian Federation states that Russia respects the territorial integrity and inviolability of the existing borders. As long as this provision, which Russia is in breach of, is in the treaty, we have a reason to take it to courts. But should we let ourselves to terminate this treaty, the Russians would tell us: ‘Wait, we have not violated anything, because we have no commitments.’ So we should not let Russia off that hook.”

There are other opinions on this subject, as can be seen in expert comments below.

“ABANDONING THE TREATY MEANS ABANDONING OUR CLAIMS AGAINST THE RUSSIAN FEDERATION, INCLUDING THOSE IN COURTS”

“The problem we have with the law on de-occupation and the Great Treaty lies in the legal definition of the Russian Federation. In a journalistic way, we say that Russia is an enemy. Some people even take it as far as to say that Russia is an ethnic enemy. That is, any Russian is an a priori enemy and should be treated like an enemy. But there is the definition of an enemy. The Great Treaty defines Russia not as an enemy, but as a friend. This is a friendship treaty, after all. And I do not support abandoning it, because abandoning it means abandoning our claims against the Russian Federation, including those in courts. On the other hand, by passing the law on de-occupation, we define Russia as a legal enemy.”

“THE GREAT TREATY SHOULD HAVE BEEN DENOUNCED LONG AGO”

“To my deep conviction, the Great Treaty between Ukraine and the Russian Federation should have been denounced long ago. Zatulin either does not know international law, or simply brazenly neglects it. In accordance with the Convention on the Law of Treaties, unilateral termination of a treaty, either as a reaction to its violation, or because of other emergencies, does not affect the norms of the relevant treaty, if they involve recognition of international borders. Russia has systematically and flagrantly violated the borders of the state of Ukraine and, accordingly, the said treaty. Nevertheless, it remains bound by the rules of common international law, and should be held responsible for it.”

“ABANDONING OR DENOUNCING THE GREAT TREATY WOULD BE A MISTAKE”

“Abandoning or denouncing the Great Treaty between Ukraine and Russia would be a mistake. Its provisions are the legal basis for persuading our international partners and the international community to support Ukraine in our struggle to restore territorial integrity. This document is very important for such a task, since it was ratified and is still valid, for nobody has terminated it. Of course, we should look into those provisions that raise serious questions. For example, there is an article there that says Ukraine and Russia are strategic partners. After we fully restore our territorial integrity, we may revisit that provision, but that will be done in a completely different situation. The Russian Federation’s disregard of the Great Treaty is yet another proof of the Kremlin’s refusal to recognize the territorial integrity of Ukraine and its sovereignty. And this, in turn, will once again show that the Russian Federation is a threat to peace and stability in Europe.”

“ACCORDING TO THE TREATY, CRIMEA IS UKRAINIAN TERRITORY, AND THE WAR IN THE DONBAS IS RUSSIAN AGGRESSION”

Yevhen MARCHUK, head of the Ukrainian representation in the working group on security issues of the Tripartite Contact Group in Minsk (Facebook posts on January 11 and 14, 2018):

“Viktor Yanukovych’s escape from Ukraine and his ouster from the Ukrainian presidency by the Verkhovna Rada were still a little over a month in the future. The open phase of the occupation of Crimea by Russia was also about a month in the future. I think everyone remembers well what was happening in Ukraine and around Ukraine in January 2014. Still, I was worried about the behavior of Russia at that time, and especially its behavior in Crimea. It very much reminded me of the behavior of the Russian Federation on the peninsula in 1992-95, when I had to deal directly with the neutralization of this behavior.

“Moreover, since I was directly involved in the drafting of the so-called Great (Basic) Ukrainian-Russian Treaty and initialed it together with Russian Deputy Prime Minister Oleg Soskovets, I remember very well how hard we had to work to get the Article 2 of this Treaty included in it, which says: ‘The High Contracting Parties, in accordance with the provisions of the UN Charter and obligations under the Final Act of the Council for Security and Collaboration in Europe, shall respect each other’s territorial integrity, and confirm the inviolability of the borders existing between them.’

“My meeting with Russian President Boris Yeltsin centered precisely on this article. Instead of scheduled 20 minutes, the conversation took as long as 40 minutes. We also spent some time discussing Articles 3 and 4 of this Treaty, which deal with the inviolability of borders, peaceful settlement of disputes, and non-use of force.

“Article 3: ‘The High Contracting Parties shall build the relations with each other on the basis of the principles of mutual respect, sovereign equality, territorial integrity, inviolability of borders, peaceful settlement of disputes, non-use of force or threat of force, including economic and other means of pressure, the right of peoples to freely determine their destinies, non-interference in internal affairs, respect for human rights and fundamental freedoms, cooperation between nations, fair accomplishment of the undertaken international obligations, and also other universally recognized norms of international law.’

“Article 4: ‘The High Contracting Parties shall proceed from the fact that good-neighbor relations and cooperation between them are important factors in improving stability and security in Europe and around the world. They shall exercise close cooperation in order to strengthen international peace and security. They shall take essential steps to promote the process of general disarmament and the creation and strengthening of a system of collective security in Europe, as well as to strengthen the peacekeeping role of the UN and increase the effectiveness of regional security mechanisms. The parties shall make every effort to see that the settlement of all disputed issues is accomplished exclusively by peaceful means, and shall collaborate in the prevention and settlement of conflicts and situations that negatively affect their interests.’

“That is why, in January 2014, I posted this photo of myself with Yeltsin in the Kremlin to remind everyone of Russia’s contractual obligations in its relations with Ukraine. This Treaty, after it had been initialed by me and Soskovets in 1995, was signed unchanged by the presidents of both countries, ratified by the parliaments of both countries in 1997 and registered with the UN Secretariat.

“And secondly, that is why I have reacted so strongly to Russia’s behavior towards Ukraine.

“Russia has flagrantly violated this Treaty as well as the Budapest Memorandum and a number of Ukrainian-Russian and international treaties. Still, this Great (Basic) Treaty has not been denounced by Ukraine.

“Why Ukraine has never raised the question of its denunciation is a separate topic. It is hot and, indeed, controversial. In spite of this, there should be at least some official comment coming, at least from the MFA. Because there is still no direct and unambiguous answer to this question for, as they say, ‘ordinary’ people.

“I do not know if Konstantin Zatulin had read my January 11 contribution, but it was precisely after my publication that he introduced to the State Duma a proposal to denounce this Ukrainian-Russian treaty in part (!?!?), namely in that part which states that ‘the Parties confirm the inviolability of the borders existing between them.’ It is precisely these two words, ‘confirm the inviolability,’ that caused me to meet with president Yeltsin in the Kremlin in the distant year 1995. I succeeded in persuading Yeltsin to keep the words ‘confirm the inviolability of the borders existing between them’ in the Treaty then. According to this Treaty, Crimea is Ukrainian territory, and the war in the Donbas is Russian aggression. And this Treaty is still ‘valid.’”