Norwegians plan to give a mountain to Finns

Sigbjorn LITLAND: “This will be a nice symbolic present to honor the friendship and good relations between the two countries”

A campaign on giving the peak of the Halti Mountain, which is located in both neighboring countries, as an anniversary gift to Finland, has started in Norway. According to mass media, 75-year-old former employee of the Norwegian Mapping Authority Bjorn Geirr Harsson said that he had come up with such an idea after his flight above this mountain in 1972. “We won’t give a significant part of Norway, it won’t even be noticed. But I’m sure that the Finns will highly appreciate such a present,” The Washington Post quotes him as saying. The Facebook page of the campaign reads, however: “Let’s take Finland up to a new level!” 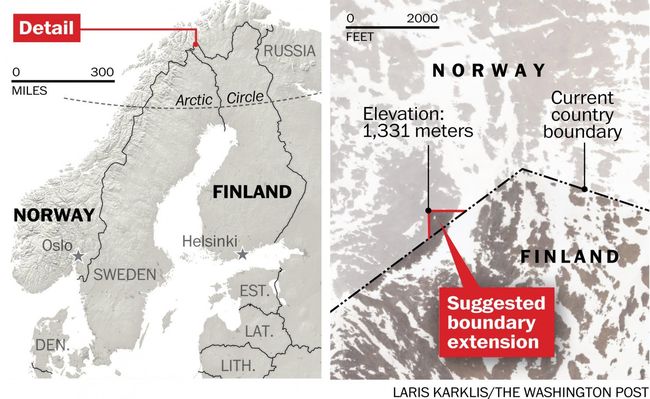 First Secretary at Royal Norwegian Embassy in Kyiv, Ukraine Sigbjorn LITLAND told The Day that many Norwegians like the idea of giving the mountain to the Finns, as it was suggested by the retired cartographer. “The campaign on making such a present, dedicated to the centennial of Finland’s independence, which will be celebrated on December 6, 2017, started on December 6, 2015 and has already won support of over 10,000 people. The organizers offer to move the common border by nearly 100 meters, so that Finland received the peak of the mountain Halti, which is located in Norway, is 1,365 meters high and is 41 meter higher than the peaks of the mountains located in Finland. As we all know, sometimes borders don’t play a big geographic role, but the organizers consider that this will be a nice symbolic present to honor the friendship and good relations between the two countries during the celebration of the independence of Finland. So far Norway has not made any official announcement regarding this question, and I’m not sure how everything will be organized officially, but I like the idea very much,” the diplomat noted.