What may happen to some political long-distance runners

Why did Kissinger come to speak with Putin?

Past week, in his Novo-Ogarevo residence, Russia’s President Vladimir Putin was receiving Henry Kissinger, former US Secretary of State and security adviser to the head of the state. Kissinger (92) was the initiator of the relaxing of tension in the US-USSR relations and was awarded the Nobel Peace Prize in 1973. Besides, Kissinger is a renowned Realpolitik guru in international relations.

The office of the RF president called Putin’s meeting with this international diplomat a continuation of their friendly contacts. It must be noted that their previous meeting took place in October 2013. Receiving the ex-Secretary of State in Moscow, Putin assured him that Russia has always listened very carefully to the opinion of the “world-class politician,” i.e. Kissinger, on matters of global political developments.

At present, nothing has been revealed about the contents of Kissinger and Putin’s conversation, nor was about the previous one. Yet the world remembers the actions of Russia’s leader, who literally four months after the meeting with the American diplomat annexed Crimea, and somewhat later invaded Ukraine in Donbas.

The Day asked its experts to comment on the most recent Putin-Kissinger meeting.

“I do not think this is a fortuitous meeting. People of Kissinger’s scale will not travel thousands of kilometers just for the fun of it, moreover, people of his age. So it is most likely that here we have to deal with certain messages, certain information which he is supposed to bring over, or with probing for reaction to some or other proposals. It remains to guess what was the real reason for Kissinger’s visit to Moscow. The current situation suggests various ideas, but they could be looking the same way, because there are so many sensitive areas in the US-Russia relations: Ukraine, Syria, Russia’s general animosity towards the US and NATO, its attempts at undermining the EU, and so on, and so forth. I think this is where the reason for this meeting is hidden. We are going to hear pretty soon, from circumstantial evidence, what it all was about. 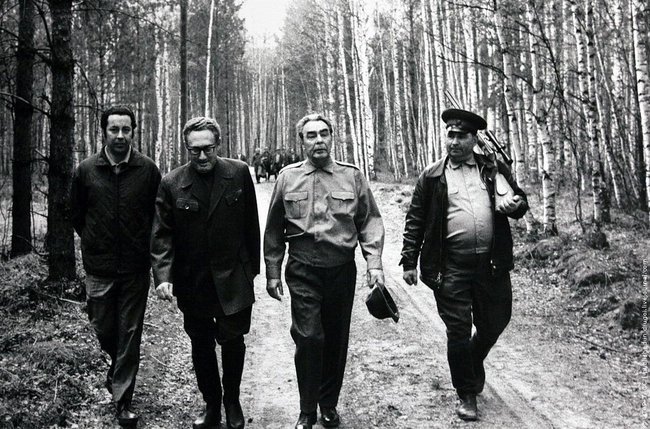 “It should be mentioned that the author of World Order, with its message that peace is impossible without spheres of influence, is a figure acceptable for the Kremlin – in particular, due to his utterances about the Finlandization of Ukraine, which was music for Moscow’s ear. Meanwhile, everyone has seen that Putin is a bearer of the 19th-century mentality, and this poses a colossal threat for all, including Americans. Which is why it seems to me that, despite Kerry and Obama’s peaceful statements, Americans are immensely worried now. It is proven by the US army officers’ clear messages about the increasing threat on the part of Russia. So this is becoming a priority topic for America and, given that Kissinger, in his own time, also contributed to the so-called relaxing of international tension, this visit could be an attempt at easing the tensions. The risk is growing that Russia could apply nuclear and military blackmail, and Americans cannot understand if it is blackmail indeed, or preparations for some inadequate act. It is possible to ease such military and political tension by seeking for compromises, but not on the key issues: America will not be able to step back even with the incumbent liberal and peaceful government.”

“Some might say, watching regular meetings of Putin and former American Secretary of State Henry Kissinger, ‘What sort of weird friendship is this? Especially now that the West should ensure the Kremlin’s isolation.’ Nothing weird, actually. On the contrary, the Kissinger-Putin meetings (and there has been at least 15 of them) are absolutely natural for a number of reasons, just like their mutual sympathy. I think that one of these reasons, an undoubtedly important one, is the fact that the Realpolitik guru and Russia’s president share an attitude towards politics: they consider politics as a balance of powers and a projection of might, and believe that all that whining about rights and liberties, as well as other norms and values, are nothing but rubbish and nonsense. The admirer of Prince Metternich and the Kremlin incumbent both think in terms of spheres of influence and pressure, and also of trading. In a word, they are on the same wavelength.

“I would also add my own opinion: Kissinger’s ‘realism’ in politics has its own grounds: his disdain for those nations and peoples who ended up either in authoritarian states or in empires’ spheres of influence. At one point in time, at a sitting of the Bilderberg Group I asked Kissinger about the reasons for his backing Putin’s policy, when the latter had already made a shift towards heavy-handed authoritarianism. ‘But there is no other way to handle this country [Russia. – Ed.]!’ exclaimed the guru, astonished at my question. In short, Russians are a nation of genetic waste, people who can only be treated with violence. When Putin recalled his conversation with Kissinger in the early 1990s, he quoted him saying ‘I do not understand why Gorbachev did this.’ He meant that Gorbachev let go of Eastern Europe which, in Kissinger’s view, should perhaps remain deeply stuck in the pocket of Russia, the nation of miserables!

“Yet there is perhaps another thing that accounts for this friendship: commercial interests. Suffice it to remember that Kissinger owns quite an influential consultancy, Kissinger & Associates, specialized in operations and lobbyism. One can only imagine how influential a lobbyist the guru himself is: it takes one phone call to a head of any state, and the question of interest appears on that state’s agenda. Forbes wrote in 2009: ‘We also know that Kissinger’s consulting firm, Kissinger & Associates, is believed to provide advice to the Kremlin.’ Certainly not for free. By the way, the Cicero Foundation, an American think-tank, recently published an interesting article about the friendship between Kissinger and Putin, hinting at possible commercial interests underlying this friendship.

“What concerns the guru’s most recent visit, a lobbyist and confederate came to Moscow to demonstrate his support and help breach the Kremlin’s isolation. They have probably discussed what needs to be done to make the West lift those sanctions, which strangle the Russian economy. The two confederates must have checked their ‘roadmaps.’ And the guru will act. Given his talents, one could expect that his effort will be fruitful. Moreover, considering the influential forces, first of all in Europe, which are looking forward to resuming business as usual with the Kremlin. Mind you, today Kissinger has become only one, however the most influential, representative of the rescue team who came to Moscow, including the Bavarian Minister-President Horst Seehofer and Austrian Vice Chancellor Reinhold Mitterlehner.”