Convergence as a norm

On February 7, Den’s website marked its 19th anniversary. Our bloggers on correct IT expansion of the publication
Vadym Lubchak

The US, Canada, France, Great Britain, Germany, and the Netherlands. Thousands of people learn news about Ukraine from the website of the newspaper Den/The Day. Thousands of citizens of Russia, Poland, Belarus, Hungary, and Georgia start their morning with our publication. With the help of the English version of the newspaper and the website (a unique combination), people in the world learn the breaking news, read analytical articles, actual interviews, and, actually, the intellectual senses of Den. Over 19 years of work of the portal www.day.kiev.ua, the first webpage of a printed newspaper with the help of one click of a computer mouse unites the whole world in its desire to know more. Most importantly, for millions of Ukrainians it has become a platform of Den/The Day as a convergent modern medium.

Today one can read the newspaper Den/The Day, its quality book production, the glossy supplement Route No. 1, watch Den-TV in online regime, befriend and have discussions on social media. The newspaper phenomenon of Den/The Day has become an IT phenomenon (one can read more in the article “IT Den. How a newspaper became a convergent media,” Ukrainian version, No. 244 of December 26, 2014).

The unique project “Ukraine Incognita” which includes historical articles, traditional columns “Museums Online,” “Self-Education Online,” “Intellectual Calendar,” “Family Album of Ukraine,” “Route No. 1,” “Intellectual Map of Ukraine.” The television format of Den, present on YouTube and the website of our publication, Den-TV, allows the newspaper to broaden its readership and visualize the senses of the publication. There is also a breaking news feed and, our pride, the blogs on the website. One can talk a lot about Den/The Day’s webpage. But it is better for the readers to enter the resource and bookmark it. Read in the commentaries of our bloggers what has the website of Den/The Day become on Ukrainian Internet space and how it helps to spread the intellectual senses.

“I want to express my sincerest congratulations to the team of the website and the newspaper Den and personally to the editor-in-chief, Ms. Larysa Ivshyna, connected on the two dates, the 19th anniversary of the website and the 20th anniversary of the newspaper. Interestingly, my first interview as the host of the first independent news show ‘Windows’ (STB Channel) was published namely in the newspaper Den, 20 years ago. So, my cooperation and friendship with Den has been tested by time and experience.

“It is a great honor and responsibility to be a blogger of your website, because the readership of the newspaper Den is a special one, represented by demanding, intellectual, and inquisitive Ukrainians.

“I will also note that the possibility that has been granted to me to spread my opinions on Den’s website is another bonus, because the publication has always defended and advanced the values of the Ukrainian world, fostered patriotism, and always taken the high stand of the civil society.

“It is also interesting to cooperate with you because the website has been actively updated; it offers modern exclusive infographics, talented caricatures, and virtual tours across online museums. The website ‘Ukraine Incognita’ deserves a special mentioning, because this resource is unique, judging by the quality of historical materials.

“There is no doubt that the website stands out of many Internet resources due to the list of non-accidental, authoritative bloggers, who always have a clear stand and a special view on the events in our state and the world.”

“‘UKRAINE INCOGNITA’ IS A SET OF MOTIVATIONAL MODELS FOR SOCIETY”

“The society’s perception of political craziness depends not only on the presence and stableness of the systems of values present in society, but in the number and efficiency of such communicative instruments as mass media, their ability to fulfill their socio-cultural function – to support the common values.

“Very recently we have observed how as a result of a powerful propaganda with many focuses, the behavior of whole groups of population in Crimea and the Donbas was changing. How practically several days later, as if after a click of fingers of a television illusionist, Russian society ‘forgot’ about ‘bloody Banderaite fascists’ and ‘recalled’ about ‘treacherous’ Turks. ‘Oceania has always been in a war with East Asia,’ right. You shouldn’t think that these people have no memory – they have no values, so they have no method to analyze the reality, no possibility to motivate their actions, no possibility to do deeds – only chaotic, most often, orchestrated by someone else actions. 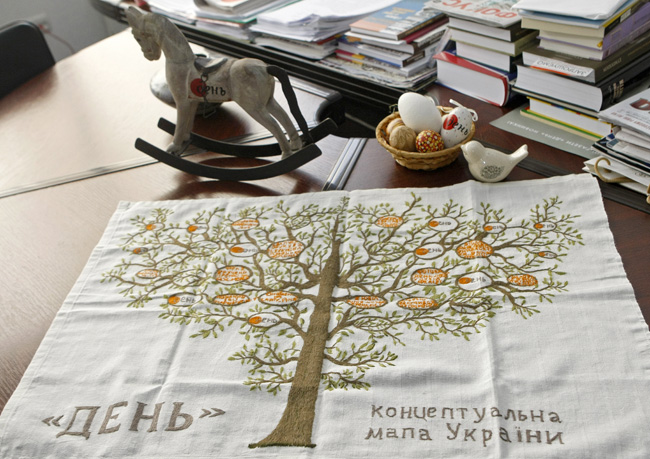 “When many years ago the editor-in-chief of the newspaper Den/The Day Larysa Ivshyna stated that the purpose of the publication is to create a new system of social coordinates based on the intellectual growth of the nation, few people understood the meaning of the task, and even fewer took her words seriously. Meanwhile, this is a creation of a system of coordinates, assertion of the system of values of our society and is the basic socio-cultural function of today’s media.

“Year after year, for 20 years by now, the newspaper Den has been following this way and doing this work. The creation of the website 19 year ago, the first website of printed publications of Ukraine, filling it gradually with important culture projects – ‘Ukraine Incognita,’ ‘Self-Education Online,’ ‘Family Album,’ ‘Intellectual Calendar,’ ‘Den-TV,’ – the movement namely in this direction.

“In particular, ‘Ukraine Incognita’ is a project that shows the versatility, mutual cooperation, and consistency of the national system of values and a set of motivational models during the entire history of our people. The space of blogs is supposed to create a sensible field of interpretation of the news feed in the versatility of authors’ opinions. All these are important modern communicational and socio-cultural instruments. I am ready to confirm their influence personally, being not only a loyal many-year reader, but also a contributor to Den/The Day. The word, pronounced in this multidimensional information cultural field, has a different civil sounding and weight, it has a considerable influence on the moods and decision-making of the society.

“Too much is at stake today, everyone’s responsibility for common destiny is too great. For example, now it is clear that it makes no sense to fight propaganda with propaganda methods in a society with no values. With direct counter propaganda methods we will only increase vulnerability of the society both in the short run and in the long run. We should master other methods of survival.

“One of them is taking part in creation of tools of support of our common system of values. Actually, this is my personal motivation of taking part in Den/The Day’s projects.”

DEN IS AHEAD OF TIME

“Although the smell of fresh paper and printing paints has an effect on me not worse than aromatic coffee, we are living in the time when we don’t always have time to wait for news and analytics till the next morning. Therefore, the website of Den/The Day is a wonderful possibility to have access to verified facts and expert assessments in any place of the world and at any time. It is important to pay attention to the fact when the newspaper created a website, for that was the time when only few people were using the Internet on our territory. So, Den managed not only to keep up to date, but also to be ahead of time, be a pioneer, being a trendsetter for the entire country, rising the standard for Ukrainian media. I am glad that owing to the possibility to run a blog on the website of Den/The Day, I have been able to bring my thoughts to a broader audience and find new readers. It is nice that the website is not looking for cheap popularity, avoids tabloid style, which is present everywhere these days, offers intellectual content, skillfully using the potential of social networks. Carry on!”

“WE SHOULD SPEAK ABOUT DEN’S INNOVATION”

“I don’t even know whether the newspaper Den has any reason to be proud of its status of a pioneer in the Ukrainian Internet network. If memory doesn’t mistake me, I myself 19 years ago, by the way in February 1997, discovered the Internet. We can celebrate this date together with the electronic version of the newspaper. Now, when it is hard to find a person who does not know what Internet is, when we, who remember how one can live without the Internet, will soon be called to share these memories with schoolchildren, we should be proud of something else. Today it is much more prestigious to preserve, alongside with the electronic version, the paper format, and Den is one of innumerous Ukrainian mass media (the situation is difficult with this in the world, too), which has been able to do this.

“I think we should speak about Den’s innovation namely in terms of this. Owing to the fact that electronic and printed versions of the newspaper are almost coevals, Den managed to be one of the first ones to catch the new trends – new from the point of view of old journalism school, non-professional authors who appeared on the network, new formats of writing texts which emerged on social media and with the help of electronic version for the first time in Ukrainian mass media they got on the pages of the printed version of the newspaper.”