Oleh Verniaiev is the athlete of April

In April the best athlete and coach of Ukraine, two-time Champion of Europe in artistic gymnastics Oleh Verniaiev, and his personal coach Hennadii Sartynsky received awards at the Olympic House. It will be reminded that the best athlete of Ukraine of 2014 (Oleh recently won Sports Oscar during the Nationwide Awarding Ceremony “Heroes of the Sports Year”) won two gold medals at the Artistic Gymnastics European Championship which took place in Montpellier, thus becoming the third absolute champion of the Old World during Ukraine’s independence. “I cannot stop admiring and being proud of this talented and successful athlete. Last time when Ukrainian gymnasts hauled the gold in all-round competitions at the European champion­ship was 15 years ago. Owing to this achievement Oleh became the third absolute champion of Europe during Ukraine’s inde­pen­dence after Ihor Korobchynsky and Oleksandr Beresh. Oleh’s phenomenal re­sults and achievements are really impressive,” NOC President Serhii Bubka said at the awarding ce­remony.

It will be reminded that gymnast Oleh Ver­niaiev as well became the first Ukrainian athlete who won the World Cup in the season 2014-15. It was the fifth time that the gymnast received a Best Athlete of the Month award – the first time was in November 2012 and then three times in 2014: May, October, and November. 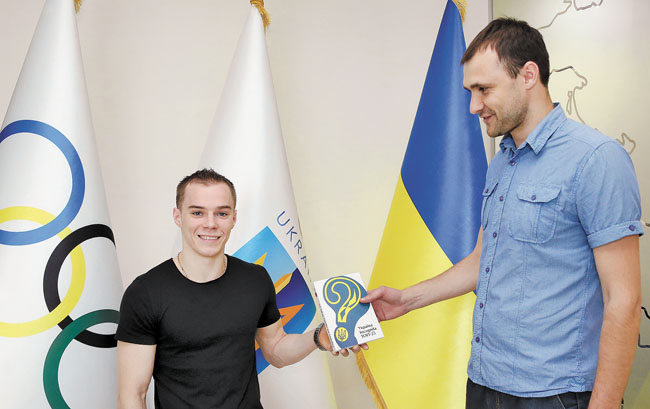 Oleh Verniaiev noted in a commentary to Den. “I thank Den for the present, the book Ukraine Incognita. TOP 25. I am sure that athletes must know the history of Ukraine. Although I have really little free time – I spend seven-to-eight hours training    – I promise to read it”  /  Photo by Artem SLIPACHUK, The Day

“I find the victory in the Best Athlete of the Month Category as an additional stimulus to improve. It is always pleasant to receive awards. Of course, there is one more motivation, for example, to overcome Olha Kharlan, who has eight times been the best athlete of the month according to NOC. We joke that now we are competing with one another in diffe­rent kinds of sports,” Oleh Ver­niaiev noted in a commentary to Den. “I thank Den for the present, the book Ukraine Incognita. TOP 25. I am sure that athletes must know the history of Ukraine. Although I have really little free time – I spend seven-to-eight hours training – I promise to read it.” Oleh Verniaiev comes from Donetsk. He admits that it is painful for him to follow the terrible events that are taking place in the east and that he hopes for a peaceful solution.

“Except for my parents, all of my relatives live in Donetsk, in particular, my grandparents. It is hard for them, because we lived in the district of the airport. Of course, my relatives do not live in their houses now. It is impossible to live there – the district has been almost totally destroyed,” the athlete adds, “Of course, this is a very difficult topic for me. We stay in touch with our family with the help of the Internet and phone calls. I would like everything to stop as soon as possible, so that I could go to my hometown to see my grandparents.”