“We have to expand our circle of knowledge!”

The first among those, who pre-ordered the new book Return to Tsarhorod are already receiving their copies and sharing their reviews

On June 17, Larysa Ivshyna, Den’s editor-in-chief, wrote on her Facebook page: “The first to pre-order our new book Return to Tsarhorod will get it with an autograph and a surprise.” And now the long-awaited day has come – the first batch of the book’s copies arrived to Den’s editorial office. Fulfilling her promise, Ivshyna signed a book for its first buyer – Vadym Matviiv from Lutsk. Along with the book, Matviiv will receive a set of postcards by Anna Havryliuk. “When we announced this promotion, the book was still being written,” commented Ivshyna. “We want to thank our readers for this unprecedented act of trust!” In general, over 300 people had pre-ordered the book! The highest amount came from the capital (more than half of all orders) and western Ukraine (Lviv region, Volyn). Also, a lot of orders came from Zaporizhia, Kirovohrad, Cherkasy, Odesa, and Mykolaiv oblasts.

At the same time, the Return to Tsarhorod, along with other new books from the Den’s Library, has raised great interest among the visitors of the Day of Knowledge book exhibition, which had been held in the capital this weekend. The exhibition became the first public event on which this book was available. 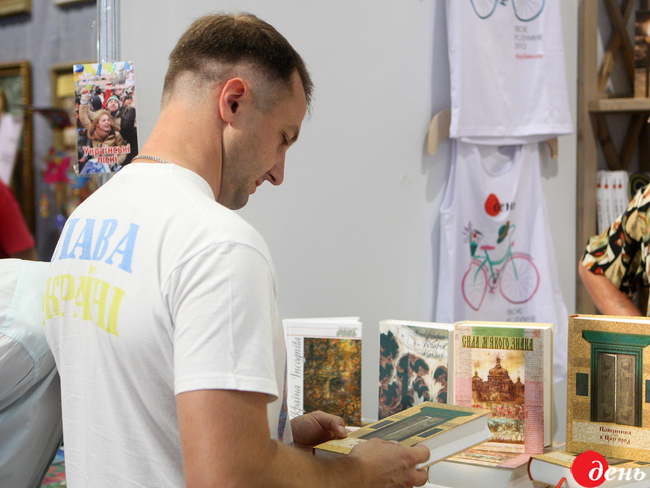 The most faithful readers came to Den’s stall before anyone else to update their collection of books from Den. “I am a bibliophile with 50 years of experience,” says Oleksii Rak, a retired person who came to pick up his Return to Tsarhorod copy. “However, I couldn’t find enough time for some books recently; but I always carefully study the Den newspaper. Valentyn Torba and Ihor Losiev are the authors I appreciate the most – they write truthfully, without looking into the eyes of the rulers. As I am subscribed to Den, most of the articles in the Return to Tsarhorod are familiar to me. I even tried to cut these articles out, but storing newspaper clips is troublesome, so a beautiful single book is very handy. In general, I am interested in history, and I collect publications on the history of Ukraine. In my collection I already have The Power of the Soft Sign and Ukraine Incognita. I am particularly interested in the ancient history of Ukraine, so after reading the Return to Tsarhorod pre-release announcement, I made my reservation immediately. Unfortunately, the Byzantine trail in Ukrainian history has not been studied very well – there is still work to do, and one can particularly feel the lack of materials from genuine Byzantine sources. I think it would be great to publish a popular science book, which would map genealogical ties of Byzantine and Russian princes. It is important that Ukrainian society finally learns its true history – without this knowledge we will never attain our present and future. I think the Return to Tsarhorod will be an interesting read to younger audience – they will know a lot about the history of Ancient Rus’, about Cossacks – in particular, the relations between Cossacks and Tatars. And for older people, the Return to Tsarhorod would be an opportunity to rethink the knowledge that they already had. Indeed, according to Anaximenes, Greek philosopher, one can outline their knowledge in the shape of a circle. Inside is what they know, and out is what they are ignorant of. The larger the circle of knowledge is the greater is the line of contact with the ignorance, therefore the more there are doubts and questions. And conversely, if a person’s circle of knowledge is small, they think that they know almost everything. So, we should expand the circle of our knowledge constantly. And the books from the Den’s Library are the best assistants here!”

Soon, all of the Den’s Library new additions will be presented at the Publishers’ Forum in Lviv. And today you can place your order through the newspaper’s website.