Who hinders the movement towards NATO?

Hanna HOPKO: “Ukraine has not yet appointed an ambassador to NATO in Brussels”

On February 3, the Ukrainian Parliament saw a joint meeting of its committees for foreign affairs and for European integration, which discussed, first of all, the questions of Ukraine’s movement towards NATO. Also attending the meeting were representatives of the uniformed services and international partners. The media were barred from this event. A representative of the organizers said this secrecy was caused by an exceptional importance of the discussed topics.

It will be recalled that, as far as Ukraine-NATO relations are concerned, the course towards NATO was marked out as far back as 2002 by Yevhen Marchuk, the then National Security and Defense Council (RNBO) Secretary. It was clearly stated on May 23, 2002, that Ukraine intended to join this organization. This declaration was followed by some concrete steps – from the adoption of relevant legal documents to the inclusion of this intention into the Military Doctrine. NATO appreciated this. There was such an exceptional, albeit somewhat forgotten now, event as the visit of NATO Secretary General George Robertson to Ukraine and his Donetsk speech in 2002. The events now underway in this region only highlight the importance of the step taken in the early 2000s.

But later on, in 2004, after a rendezvous between Leonid Kuchma and Vladimir Putin, this clear course towards the Alliance was cut short. The time, when even Party of Regions members voted for integration into NATO, gave way to a period of gradual and sure slide into the Kremlin’s embraces. The NATO course was deleted from the Military Doctrine, and then Ukraine also lost a chance to get the Membership Action Plan (MAP). Incidentally, it was the summer of 2004, and Ukraine saw its first Maidan in the fall of the same year.

Some time later, when the prospect of a final European choice seemed to glimmer in Ukraine during the Viktor Yushchenko presidency, Angela Merkel and Nicolas Sarkozy blocked the granting of a MAP to Ukraine and Georgia at the NATO Bucharest Summit in 2008. In the same year, Russia committed aggression against Georgia. Further on, when the Yanukovych team came to power, it also caused parliament to delete the NATO membership provision from the Law “On the Foundations of Ukraine’s National Security.”

Since then, we have been wandering in the wilderness of statements, speeches, and declared intentions, and a year ago even the president surprised the public with his answer to the Alliance Secretary General Jens Stoltenberg’s question whether Ukraine was prepared to become a NATO member – “No, but we must get ready for this.” And, no matter how hard Poroshenko’s defenders try to justify him, the word “no” rings an unpleasant note in the language of diplomacy. Journalists often fail to notice even the poorly concealed irritation from the mouths of NATO officials, when they ask bluntly if Ukraine aspires to join NATO. On the one hand, the war has prompted the Ukrainian people to understand the necessity of this integration, which opinion polls confirm (48 percent are for joining NATO, 30 percent against, and 13 percent remain undecided, according to a Rating survey).

On the other hand, experts notice that certain executive bodies are deliberately stymieing this process and some are more and more using the word “sabotage.” Why? Firstly, NATO standards mean stricter requirements to Ukrainian generals who will thus have to “clip on the back of their own heads.” Secondly, many harbor a suspicion that this country’s leadership is still afraid to infuriate the Kremlin, following the principle “you never know what might happen.” On the other hand, most of the media and official speeches offer no in-depth explanation of the details of this integration, which triggers speculations on this matter, as much as there once were speculations about nuclear disarmament without qualified accompaniment.

“The very idea of inviting three parliamentary committees and representatives of the uniformed services to discuss security matters is an extraordinary thing. Nothing of the kind has ever been done before. Events like this prompt officials to act. There must be parliamentary and civil control over the army and police. Security is a multisided problem, and it is important to know that the military component accounts for 20 percent in the case of NATO integration. The question is to reform the country and society as a whole. Naturally, the West focused, above all, on defense. Unfortunately, society is not much aware of all the particularities of this process. There is a tendency to speed up things in order to integrate into NATO as soon as possible. For example, it took the US 20 years to form special operation forces. But, in comparison with the experience of other countries, our progress in this sphere and in reforming the security sector in general is very rapid. It is the war and the objective reality that forced us to do so. And very intensive practical work is underway now to bring our army into line with NATO standards. What is more, not only we are learning from them, but also they are from us. Moreover, NATO membership should not be considered as the ultimate goal. This membership is only a stage in ensuring the state’s security. Our immediate goal is to meet NATO criteria, which will strengthen our defense. I must also emphasize that cooperation with NATO is not confined to supplying weapons to Ukraine only. This cooperation is of a much broader range.

“Of course, too much time has been lost since Kuchma authorized Medvedchuk to delete NATO integration from the Military Doctrine. Unfortunately, I can see that society is very little aware of these nuances. We must make much more efforts to explain to the populace what cooperation with NATO is like, what is to be done to reinforce defense, etc.” 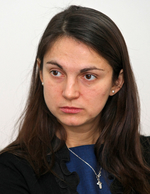 “There was a joint session of two committees – for foreign affairs and for European integration. We also invited the committee for national security and defense as well as the Verkhovna Rada’s permanent delegation to the NATO Parliamentary Assembly, which deals with comprehensive Ukraine-NATO cooperation. Past year, when we visited a German training center, we understood that the German parliament exercises strict control over security and defense reforms. So, it was decided to join forces with the committees for European integration and national security in order to monitor Ukraine’s progress on the road to Euro-Atlantic integration. We also invited some foreigners to the session. MPs receive considerable support from the British and US embassies and the NATO Liaison Office in Ukraine. There were representatives of Norway, Bulgaria, the Czech Republic, and Poland.

“There are very many problems in the pace of reform in the security and defense sector. We held a similar parliamentary control meeting on December 9 and saw weak coordination between various defense and security bodies. It was important for us to hear on Wednesday the information on drawing up the annual National Program of Ukraine-NATO Cooperation for 2016 in the context of Ukraine’s progress in meeting the membership criteria. We found that this document had been submitted to the president for signing on December 16, and we expect the president to sign it. Regretfully, he has not yet done so. The Foreign Ministry spokesperson said they had done everything to this end on their part. Likewise, Rand Corporation did a survey of its own on the security and defense sector reform. This document is still in the RNBO and has not yet been made public.

“It was important for the MPs to hear about any real progress in this field. Where is the concept of the development of Ukraine’s armed forces until 2020 and, accordingly, a switch to NATO standards? Where is the concept of the development of Ukraine’s security and defense sector and the strategic defense bulletin, with due account of NATO experts’ advice? At what stage is the reform of the law-enforcement and intelligence bodies and the military-industrial complex? It is not only the military sphere that should meet the NATO criteria. This also applies to law, political institutions, and economic standards. Western partners often speak of the lack of rapid communication and even of certain sabotage. We also raised a special question about the NATO mine clearance program, for this is one of the priorities in eastern Ukraine.

“Incidentally, Poland has already urged NATO member states to agree to invite Ukraine to the NATO Warsaw summit to be held in July. The key question I raised during the debate was about the reason why Ukraine has not yet appointed an ambassador to NATO in Brussels. Likewise, there are no Ukrainian representatives in the EU and in the 16 countries that are very important to us as lobbyists of our interests.

“The most crucial point for us is improvement of cooperation between the General Staff, the Ministry of Defense, and the Ministry of Foreign Affairs, for they do not coordinate the drawing-up of concepts and the approval of annual plans. It is necessary that they pursue the same strategy.”