To fall in love with Crimea

Exhibition “To the sea!” in the AVS-Art Gallery
Olena Shapiro

According to Alla Marychevska, AVS-Art Gallery art director, the gallery showed the collection of maritime paintings for the second time – providing a great opportunity for viewers to at once compare different systems of artistic language: realistic, impressionistic, symbolic, and allegorical. The landscapes on display were drawn by several generations of artists. “We are ourselves curious: how did the sea look like half a century ago? How does it sound embodied in colors by masters from Lviv and Odesa, from Transcarpathia and Mykolaiv?” said Marychevska. “Our exhibition showed a dialog of different painting schools and generations. Mare liberum apertum!”

A stunning impression the southern coast beauty is given to us by the paintings of Valentyna Tsvietkova, People’s Artist of Ukraine. In her memoirs, she recalls the moving from Astrakhan: “In 1936 I was subdued by the beauty of the Crimean South Coast, and moved permanently to Yalta... trying to convey in my paintings the inimitable peculiarity of the blooming and sunny Crimean land.” Amazingly harmonic and luminiferous, her paintings make even the most boring homebody fall in love with Crimea, as the artist deliberately combined still life and landscape to fully reveal the beauty of the land. “The main thing for me in painting is to capture the light and air that give life to all living creatures,” the artist used to say. She had drawn many pictures in her studio with balcony that contained the view of the Bear Mountain and the sea fading away in blue air, coupled with a still life of blooming bouquets, fruits or quaint southern sea shells. There is a minor planet in deep space named after Valentyna Tsvietkova, and collectors are happy to buy her artwork, which is assessed on the Ukrainian auctions in tens of thousands of dollars. 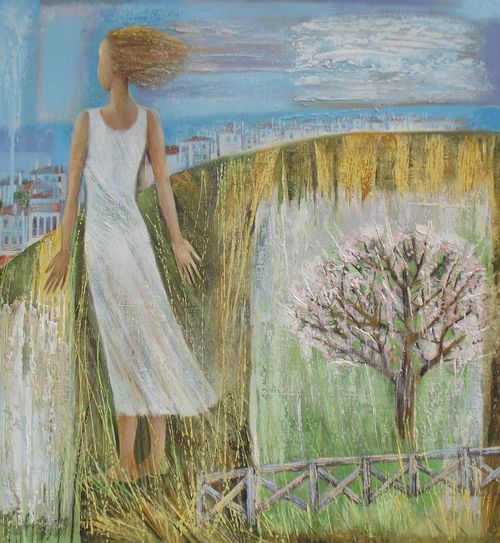 Whereas Tsvietkova’s paintings are definitely feminine in their essence and color, the paintings of Adalbert Boretsky are saturated with purely masculine energy – strong and decisive: with a resolution, convex landscapes and prudently analytical colors are born from the depths of the canvas. The artist graduated from the Uzhhorod Art School, and absorbed the influence of famous Transcarpathian artists, such as Adalbert Erdeli and Yosyp Bokshai; he was very fond of plain-air paintings and used to paint a lot on the highlands of Verkhovyna. In the early 1930s, Adalbert Boretsky joined the “Carpathian Rus’ Society of Fine Arts” and in 1939 his works were exhibited at the World Fair in New York. His works are particularly interesting as a contrast to exquisitely contemplative feminine canvases.

Stepan Yarovy had been proving himself as a zealous supporter of maritime paintings since already his early sketches, dating from the late 1940s and early 1950s – the wonderful Morning in the Port, Chekhov Bay, Golden Beach and Simeiz. He received his art training at the “Vsekokhudozhnyk” studio, under the Johanson, an extremely famous artist of the time; he used to work a lot in the landscape genre, and later in his creative life he was more inclined to the tragic pathos – such is the Storm in Chersonese, as well as the Morning in Kerch, ash-gray canvas in minor mood. 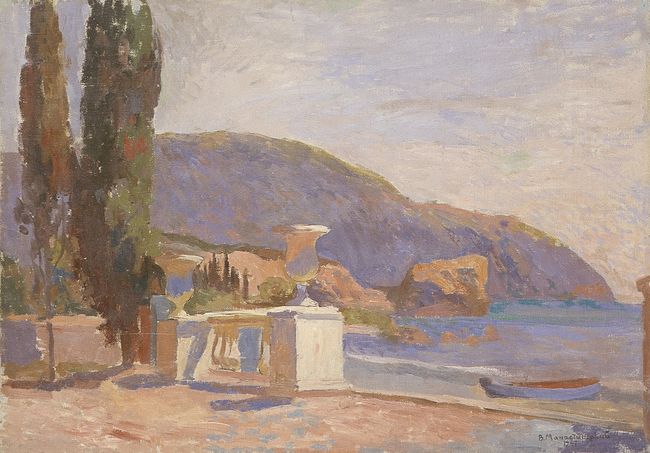 Natalia Loza has also devoted many of her paintings to Crimea – her favorite motifs are blue sea and cozy vine covered seaside gazebos. In an interview she has admitted, that her father – artist Adolf Loza – had extremely influenced her upbringing. Landscapes of Natalia are somewhat reminiscent of her father’s, but hers are characteristic with clearer contours, a very gentle and sensitive attitude to tonality, and a precise and elegant composition – as perfectly demonstrated by her Hot Afternoon painting.

As for the question on what did the sea look like half a century ago – we can safely assume that the sea did not change at all. But what has changed fundamentally – is the outlook of people; and that’s why the artistic reflections of the south ranges from naive realism of the 1950s to the idyllic impressionism of the 1980s and the philosophical abstractness of the 1990s.