As many as 100 Dragon Slayers!

Lviv recently celebrated its 762nd birthday. It will be recalled that the City of Lion marks this date on the eve of and on the Day of St. George the Dragon Slayer who is considered the patron saint of Lviv. This festive occasion must have caused a special interest of both Leopolitans and visitors in the figure of a young beardless Roman soldier, a model of chivalry and a dragon slayer, a Christian saint and martyr.

I will not retell legends about St. George, for they can be easily found, if necessary. Instead, I will focus on his numerous iconographic images in Lviv. For example, about 100 images of St. George are kept at the National Andrei Sheptytsky Museum. I learned it from Maria HELYTOVYCH, head of the ancient Ukrainian art section, who offered me an excursion to several museum rooms in order to show how the saint’s image has been changing in icon-painting through the centuries. 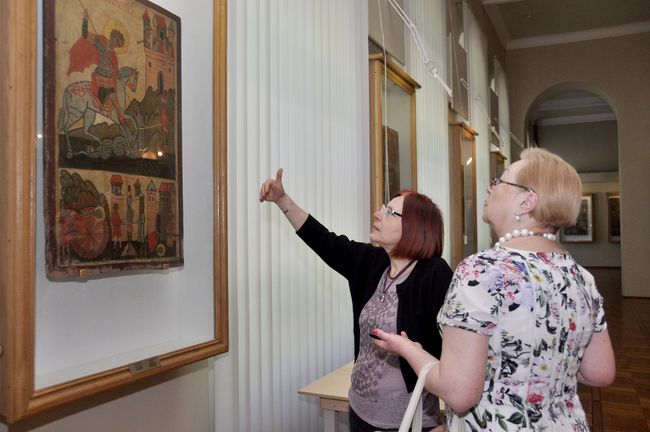 First of all, the researcher shows a 14th-century icon from St. Joachim’s and St. Anna’s Church in Stanyl, near Drohobych, and notes that it is a true hallmark of the National Museum. “This is the oldest icon of equestrian St. George the Dragon Slayer in Ukraine,” Helytovych says. “The image came to us from the Theological Academy’s museum in 1939, and it had been handed over to the Theological Academy by the Rev. Petro Mykylyta in 1932.” 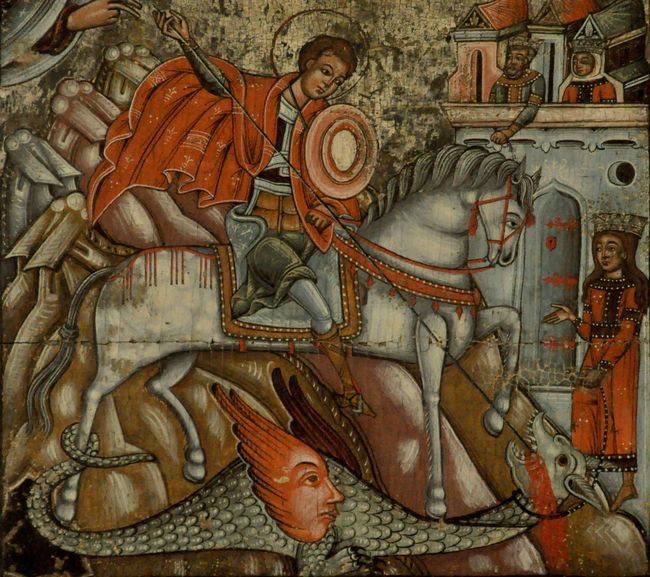 The icon belongs to the universally-known monuments in the history of Ukrainian art, and its bibliography includes dozens of entries, which is caused not only by the icon’s oldness, but also and above all by its high artistic qualities. The icon is by far the best expresser of the artistic particularities of Byzantine-tradition Ukrainian icon-painting. This work is also distinguished for uncommon expressiveness and laconism of the composition, while the picture of St. George on a black horse is rare. 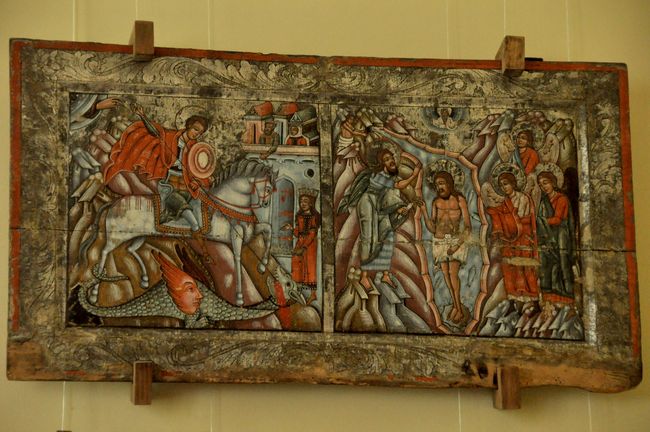 “Valor, the victory of good over evil, a clear background, contrasts of the dark and the light… Obviously, the icon-painter was of a very high level. The master precisely depicts even the minutest details, but you perceive all this very monumentally, laconically, and expressively. Look, there are even nails on the horseshoes,” Helytovych says, adding that the icon is in a very good condition. “That’s the way high technologies were in the 14th century.” 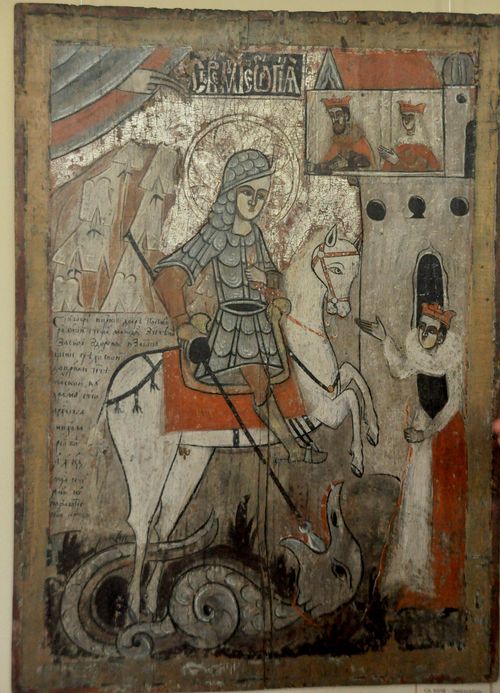 The author is unknown. After all, it is a customary situation for ancient images because they were all considered to have been painted under the influence of the Holy Ghost. So the author was the Holy Ghost, a Divine inspiration. For this reason, icon-painting remained anonymous until as late as the 16th century. But all the Ukrainian 14th-15th- century icons come from Western Ukraine – the Lemko and Boiko regions. 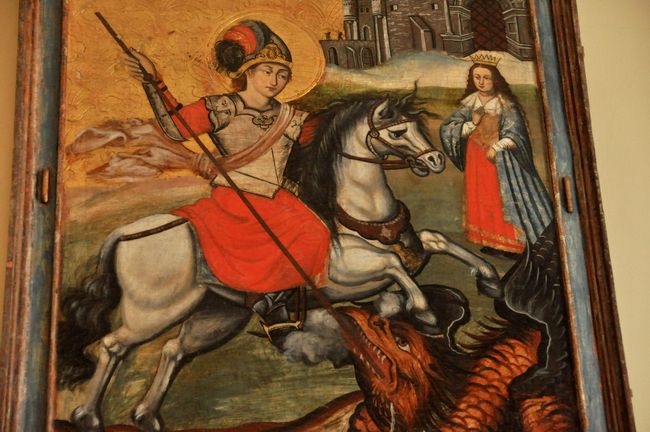 Then Helytovych shows an early 16th-century icon from the village of Daliov (Lemko region, south-eastern Poland). It shows the liberation of a princess from the ferocious dragon, which is the greatest wonder in St. George’s life. “The soldier appeared when the town was being attacked by the dragon who annually demanded that sons and daughters be sacrificed – otherwise he would destroy the whole town. When it came to the royal family, a horseman came and defeated the dragon. St. George is riding a white horse, and we don’t have a black horse in our collection. The icon has three brands that depict martyrdom: breaking on the wheel, sawing at the stake, and beheading. This icon lacks the dynamics of the previous one, for we can see that God helps the soldier here – there is a segment of the sky and the hand of God the Father which blesses George to win a victory. This is why it was perhaps not so difficult for him to win, for God helped him,” she says.

Now let us take the 16th-century image of the Dragon Slayer from the village of Stupnytsia in Drohobych raion. “It is Gothic,” the museum researcher says. “It’s an intersection of East and West, and we can see a totally different interpretation of St. George. He holds a sword, while the lance is stuck into the body of a three-headed dragon. Walls, a lot of characters who watch the battle, soldiers in medieval outfits… The full-length George is only a soldier here, not a horse rider.”

Then we see in another hall a baroque Dragon Slayer from Volhynia. The icon, dated 1683, comes from the village of Mykhnivka, Kamin-Kashyrskyi raion. Following this, we look at the 1624 image from Chortkiv, Lemko region. 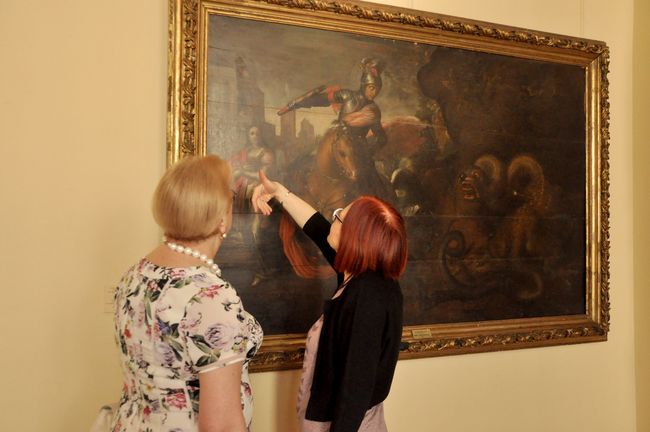 The collection also comprises an icon from St. George’s Cathedral, made by Luka Dolynsky, one of the best known late 18th – early 19th century masters. “It is painted on a wooden board and looks like a religious-theme picture, rather than an icon,” Helytovych says. “It shows quite a secular image, and if it were not for a barely visible nimbus over his head, George could be interpreted as a knight who frees the bride princess from the fierce dragon. The horse is shown from a totally different angle – not like in other icons, even those of the 17th century. A half of the picture is a huge cave with a fatally wounded dragon. Note the image of the princess who looks very pretentious. Yet she is depicted in the minutest detail. In the background, we can see the people who watch the fight and some buildings. All this looks very realistic.”

What complements the collection of Dragon Slayers at the National Museum is a small sculpture of St. George made by Johann Georg Pinzel, a world-famous late baroque and rococo master. It probably dates back to the mid-17th century. “Unfortunately, this composition has suffered considerable damage. In particular, St. George lacks a hand,” Helytovych says. “But we can see a very good plasticity, a play of light and shades. The composition is dynamic. The dragon with an open toothed jaw looks very convincing. The horse rears over the monster. This is perhaps one of Pinzel’s best works.”

It is worthwhile to note in conclusion that the museum’s collection comprises a total of 150,000 items that represent centuries-old traditions in the development of Ukrainian culture. Ukraine’s fullest collection of 12th-18th-century Ukrainian sacral art is an object of special pride. Out of this, the 14th-18th-century icon is presented in the most multifaceted way.