The symbol of symbols

This Japanese artist was a friend of the museum: he supported it financially and gifted 26 of his personal works. Ryuseki Morimoto recently departed this life. Grateful to this uncommon person, the Khanenko museum hosts an exhibit of his works from its own collection. Olha Petrova, a well-known artist and art critic, a professor at the National University of Kyiv Mohyla Academy, who exhibited together with Sensei Morimoto in Osaka, is sharing her reminiscences of the master with readers.

The mistress is going to meet visitors to the Khanenko Museum on February 10.

In September 2002, the National Bohdan and Varvara Khanenko Museum of Arts began a new season with an exhibit of Sensei Ryuseki Morimoto’s calligraphy. The Embassy of Japan in Ukraine, as a project co-organizer, was carrying out a series of cultural projects called “Japanese Autumn,” and that exhibit, like the other projects of the embassy, was timed to the 10th anniversary of the establishment of diplomatic relations between Japan and Ukraine. 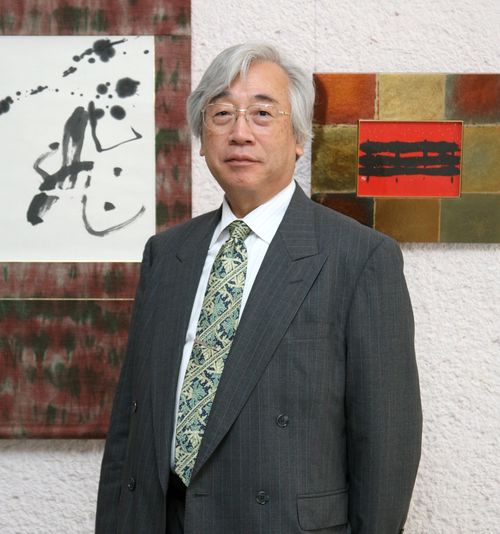 The artist devoted all his lifetime to the art of calligraphy in continuation of the family tradition. Father had handed down the secrets and mastery of magic writing to Ryuseki. Having appreciated the perfection of his art, the artist’s colleagues elected him director of the Association of Contemporary Calligraphy in 1976. In 1979 he founded Hokushin Shodokai, his own school of calligraphy. Several generations of his pupils have been developing and popularizing the art of calligraphy not only in their homeland, but also in many countries of the world.

Morimoto was constructing the Kyiv exposition with his own hand. He would take scrolls wrapped in thin paper from elongated pencil boxes with incredible tenderness. His movements looked like a religious rite, and when all the scrolls were at last unfurled, the museum staff saw the mysterious world of signs and symbols.

The master classes the artist conducted as part of the exhibit were a huge success with audiences, especially among young people. The maestro was applying symbols quickly and confidently to the scroll’s surface which is associated with the endlessness of cosmos. The energetic and flawless strokes of the paintbrush on wet paper resembled precise ballet “pas.” For a calligrapher has no right to make a mistake. It was gratifying to see that young people, who know Zen Buddhist philosophy, are ready, intellectually and spiritually, to feel, look into, and listen to a perfect and mysterious world of the Japanese artist.

Sensei Morimoto’s works – ornamental and, at the same time, constructive – immerse the spectator’s mind into the aura of mystery. The word mark, hieroglyph written by the master, is perceived as an unresolved intriguing labyrinth that excites imagination. As a symbol, the calligraphic sign is multiple-valued and inexhaustible for a thoughtful viewer. It is a secret which, in Oscar Wilde’s view, “remains precious not only for the gods, but also for those who pray.” 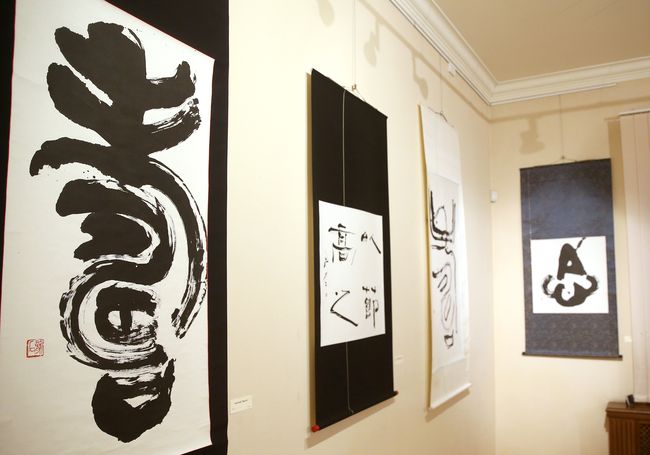 In his calligraphic messages, Ryuseki Morimoto presented “words-notions” that embody the essences of Zen worldview. On the scrolls, the master of a laconic symbol etched the spiritual image of Confucius who applied the notion of “love” not only to man, but also to everything positive in the world. For it is no accident that calligraphic writing in Japan has long been considered as “message of the gods.” A sign-symbol carries energy, so it is not pure chance that the sensei announced his exhibit under the sign of “Joy.”

Maestro Morimoto later gifted the calligraphic works, executed in the living tradition of “Shodo” and shown to Ukrainian audiences for the first time, to the Khanenko Museum. Now spectators will be able to see these works and pay tribute to the Japanese master at the exhibit being held in his honor.

Olha Petrova is an artist and an art critic