“No grounds for lifting the sanctions”

Gunther KRICHBAUM: “It is extremely important that Ukraine be extensively present in the European media”

Past week Kyiv received a delegation from the Bundestag EU Affairs Committee, led by chairman Gunther Krichbaum. Speaking at the press conference for media, he said: “The goal of this visit was to obtain a current picture of political developments and the economic and security situation in the country, on the one hand, and on the other, to promote understanding between nations.” Meanwhile, Manuel Sarrazin, MP for Alliance ’90/The Greens spoke on behalf of the German parliament in general when he disproved information about Ukraine being threatened with lifting the sanctions against Russia if it fails to amend the constitution and pass legislation on elections in Donbas, as stipulated in the Minsk agreements (the so-called Minsk 2). “The sanctions were imposed due to Russia’s behavior and could be partially or fully lifted when this behavior changes essentially, or becomes somewhat milder,” remarked Sarrazin. At the same time he noted that the most important and weighty argument which could have persuade our partners and our public opinion in the expediency of continued sanctions was the creation by Ukraine of all legal prerequisites for fulfilling its obligations under Minsk 2.

What does Germany find of Russia’s implementation of the Minsk agreements, given Angela Merkel’s remark (made during her talks with Petro Poroshenko) about the impossibility to hold elections in Donbas in the present circumstances? Read The Day’s interview with Gunther KRICHBAUM. 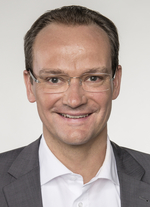 “Indeed, elections are part of the Minsk agreements. But there is a prerequisite: the implementation of paragraph 1, immediate ceasefire. Meanwhile, we must not confuse the roles. Ukraine is the victim of assault on the part of Russia in that the latter has annexed the Crimean Peninsula and occupied the eastern part of Ukraine. That is why, I expect not only the ceasefire, but also Russia’s withdrawal of heavy weapons from the conflict zone. Only then should Ukraine take certain measures to make sure that weapons never again return to this region. Until the guns have stopped talking, we cannot bring up the question of proper local elections in the region. And we hope that such preconditions will be created.”

But Russia’s aim is to create a “frozen hot spot” in Donbas and tether Ukraine, keeping it in its zone of influence. Generally speaking, even here, at the embassy, they call Russia unpredictable when it comes to Moscow’s implementation of the Minsk agreements by the end of the year.

“If even you say that the embassy officers are of this opinion, it means that they do not doubt what we see and how we assess it. We are perfectly aware of where the aggression is coming from. We know perfectly well that after the former president Yanukovych refused to sign the Association Agreement with the EU, which aimed at nothing other than bringing Ukraine closer to European liberties and values, mass protests erupted. Why did people take to the streets? Not because they wanted more money. A lot more was at stake: they wanted to rely on such European values as freedom, the state of law, and democracy. These are exactly the ones which are perceived as threats in Russia. The Russian government does not want more democracy and more liberty for its citizens. Yet the country which strives for it lies literally on Russia’s doorstep and can pose a risk of infection. However, a strong president should not fear his own people (here I mean Putin), but should listen to them instead, and gamble on democracy. Therefore we, as members of Bundestag, are perfectly aware that Russia has to spring into action here. That is why we will constantly keep supporting the extension of the sanctions until Russia’s behavior changes.”

Do you believe this is possible?

“Well, President Putin himself admitted at a press conference that the sanctions are working and he has enormous problems due to the sinking oil prices. All because Russia conceives its foreign policy like the policy of supply. All is good and well until energy prices begin to drop: you can sell your energy resources at high prices in global markets. But when the prices plummet, like oil recently, the country faces enormous problems. The sanctions top it all off. Therefore Mr. Putin will have to think twice about the possibility to continue his policy without sending his country into a downward spiral of economic crisis. Frankly, we do not want it, but it is up to him to decide.

“In conclusion, I would also like to say one important thing. Ukraine has our support. Us as MPs, and – as can be seen from the active involvement of our foreign minister and the federal chancellor in the Normandy format – Ukraine is also backed by the German government.”

What could you say about the phenomenon of Putinversteher (those who understand Putin) in your country?

“This is exactly why it is important that this visit help keep Ukraine in the focus of the German media. Recently, it has disappeared from the front pages of European and German mass media. This leads many in Europe in general, and in Germany in particular, to believe that the situation has settled down. And a question arises, why the sanctions against Russia should be prolonged. That is why it is absolutely critical that Ukraine was extensively and actively present in the European media. We know about the situation in your country, and as long as it remains like it is, there are no grounds at all for lifting the sanctions.”