Maria SEMENCHENKO: “Our duty is to know who and why is protecting the integrity of our country, hence who protects all of us”
Maria Prokopenko

Starting a new book series by Den newspaper is a title about Ukrainian soldiers, military medics, and chaplains, who are fighting for the victory of Ukraine directly on the frontline. It is called Catastrophe and Triumph. Histories of Ukrainian Heroes. This book tells about the war without romantic embellishments and pathos. It is about the experience and opinions of fighters (and a fighter here is not only an occupation, it is a type of character) that Den’s journalists have been collecting for over a year. Here you can find iconic figures as Yulii Mamchur and Myroslav Hai. Here are Den’s old friends and sworn brothers – Yurii Fomenko, the warrior-farmer, and Artur Stepanenko, the soldier with the call sign “Sokil.” The book’s heroes are “cyborgs” and those who survived Ilovaisk disaster. One of the book’s chapters is the iconic “Letter from the Front” by Colonel Viktor Pokusa, that one time had stirred a discussion among Ukrainian leadership on reforming the defense system. And there are some heroes whose stories the authors were able to learn only from their family and friends – for the war took them forever...

Some of the characters are in the military by their callings, while some others just took up arms one year ago. However, everyone featured in the book is a hero – but not the cartoonish kind of superman hero who rushes who knows where in order to put up a show of fighting some abstract enemy. Den’s heroes know what they are protecting, and despite the horrors of war, they remain human beings. Maria Semenchenko, the compiler of the Catastrophe and Triumph. Histories of Ukrainian Heroes, has explained why the publication has more triumph over tragedy and described the process of creating the book.

Den has published dozens of war stories, and certainly, all the editors have had a feeling that the publications started to outgrow the newspaper format. When the idea to create a separate book about these fighters first emerged? 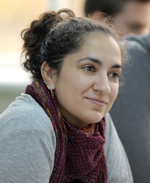 “Actually, the writing of this book began since the first day of the war. From the time when the Russian military dressed as the ‘green men’ came to Crimea, the book had been written daily. This is a collection of war stories, written by Den’s journalists across the country throughout 2014-15. The book offers to review the episodes of this conflict, the lively pieces from which an idea about the war in general can be formed. When a critical mass of these stories had been accumulated, Larysa Ivshyna, Den’s editor-in-chief, voiced the idea of such book. It is important – especially now, when patriotic exaltation and adrenaline has receded, and the majority of our society has reverted back to their routine lives. The war is not palpable when you live in a peaceful city – but it hasn’t just disappeared. Every day, people in Donbas risk their lives and die fighting. And, certainly, it is our duty to know who these people are, why they went to defend the integrity of the country, and thus all of us.

“Incidentally, the title of the collection was also proposed by Ivshyna. There were many options, but these words seemed the most accurate to our editors. I am the editor of the Society section in Den newspaper, in which the stories of fighters, doctors, volunteers, and chaplains are published, and therefore I took up the organizing role for this book. It was not easy selecting what to include in the publication from hundreds of stories available, because each of them is extremely important.”

What is the structure of the book?

“There are five chapters. The first chapter is about the annexation of Crimea – and, in fact, about the beginning of the conflict. The next are the texts about the war in eastern Ukraine, the stories of fighters and of some key events of the ATO – Ilovaisk, Donetsk Airport standout, the retreat from Debaltseve...

“Yet there are two sections about chaplains and doctors, people who save soldiers physically and spiritually – both at the frontline and in hospitals across the country. These sections are not too large in size, but they are very important. Many dramatic events were seen from the inside by doctors and chaplains. Without them, this book on the war would be incomplete.”

“The book has no section on the volunteers. Of course, these people have been crucial in the past two years of the war. But, objectively, their stories deserve a separate large book, where the new Ukrainian phenomenon of volunteering would be comprehended: as it started from Maidan, and then gained some surreal momentum. Here the volunteers are rushing under fire to bring the scopes, thermal imagers, uniforms, and food to a hot spot. And there they are spending 24 hours a day in hospitals. Or weaving camouflage nets and drying produce sets for borscht. Or assembling the military equipment. Or... a thousand more stories can be told. Perhaps one day they will have a book of their own too, but for now all their stories can be accessed at the Den’s website, and on the pages of our newspaper.

“And the Catastrophe and Triumph. Histories of Ukrainian Heroes is a book about fighters, those who had only yesterday been working as bankers, teachers, school principals, mechanics, musicians, chefs or journalists – and now fight in Donbas. This is an attempt to become acquainted with those cut off from their families and everyday life for months, fighting in the east on our behalf. This is an attempt to find out what these people are experiencing, what historical events they witness and belong to. An attempt to see and feel this war through their stories...”

What was the most difficult section of the book to edit and why?

“The most difficult section was “They died for us....” Den was the first to record the stories of those whose lives were cut short by the war in the east. The first story of our special project, which has the same title as the chapter, our newspaper has published on May 11, 2014. Since then we have been printing the stories of fallen heroes every week – on Tuesdays. Unfortunately, the stories do not become less in numbers. This section was very difficult to edit, just as the topic in question. It was hard emotionally to time and again reread the publications of heroes who are no longer with us... Daily news from the front line in the media can often be heard as a statistic – today we lost three, five, ten fighters. But when you read their personal stories, you know that for each such statistic a person disappears, a whole universe vanishes. You read about guys who somehow lived and admired their lives before the war, who had changed the world in their own way, who loved and dreamed – and then realize that they are no more. 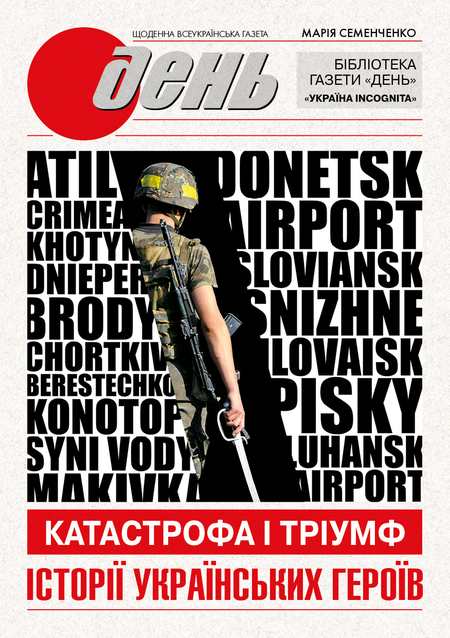 “It was difficult to select such stories for the book, as there are many of them – much more than was included in the publication; and each of them is important, worthy of reading. Unfortunately, there was simply not enough room in the book to publish them all, so one had to choose something. Some might ask about why we have picked these characters in particular, and not others. We have chosen stories with the most facts and details, with the most profound image of the person. Also, this section includes iconic stories: about Major General Serhii Kulchytsky, Colonel Taras Seniuk, Lieutenant Colonel Kostiantyn Mohylko... But, again, absolutely all the stories are important, and they can be read at the Den’s website, under the title ‘They died for us...’ Moreover, as the book will be released, this section will unfortunately still be updated with stories of fallen heroes.”

What does the book have more of: the Triumph or the Catastrophe?

“The character stories of this book are perceived as a whole. They show war not only as something heroic, but also as something dramatic and terrible. We often want to read stories that are optimistic, about the heroic exploits, the miracles at the frontline – and avoid the other side of war, which is death, blood, and horror. But it does not work like that. Anywhere one can find an exceptional heroism, one can also find the signs of catastrophe. Ilovaisk – was it just a catastrophe or a triumph as well? Donetsk Airport standoff – was it just a triumph, or has a catastrophe also occurred? Making a book only about triumph would be dishonest. Equally, it would be unfair to write exclusively about catastrophes. In this war – and in this book likewise – these two concepts are inseparable. Anyway, the triumph still prevails. You can see the triumph of human dignity, officer’s honor, and courage... That is why the title of the book has these two words in that particular order – first comes the catastrophe, and then the triumph.”