Valentyn TORBA: “The occupation of Luhansk and eastern Ukraine began well before the tragic events of the spring and summer of 2014”
Anna Sventakh

I, an Eyewitness. Notes from the Occupied Luhansk, a book by the Luhansk resident Valentyn Torba, which includes his reminiscences and evidence from the occupied Luhansk, begins with Taras Shevchenko’s words about an invaded fatherland and its enslaved people. These words of the classic, whose stone statue is standing lonely in downtown Luhansk among tricolors, watching a carnival of madness and humiliation, the desecration of the Ukrainian flag and the beatings of embroidered shirt-wearing youths, turned out to be too topical.

This book is part of a trilogy prepared by Den’s Library under general editorship of the editor-in-chief Larysa Ivshyna and logically fits in with the understanding of the criminal causes and tragic effects of the past few decades, which some people want to reduce to some isolated names, episodes, and even territories. The Donbas war did not begin yesterday. Likewise, the name of Yanukovych cannot absorb all the sources of this catastrophe. This is why it is so important to see the problem as a whole and to feel the reflection that is supposed to stir up interest in deep-rooted conclusions.

What is war and occupation? What is the weight of a Ukrainian word in a city isolated by the aggressor? Who and when “put to sleep” the robbed Donbas? These questions will be haunting Ukrainians as long as there is a threat of war and the boots of a butcher trample on our land. A year ago the door to greater Ukraine was shut to the author. At first Den opened a window, allowing him to make public his daily observations of the course of events. Then, after a period of shelling, he was completely cut off from the outside world. But Valentyn Torba never stopped recording the way his city was sinking into darkness literally and figuratively. Finally, this picture of reality in the chronology of events was shaped into the abovementioned book about which we are speaking with the author.

What did your occupied Luhansk diary begin with? Was there a certain event, a “point of no return,” or was it an idea, a thought, which you wanted to record? 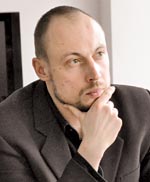 “The ‘diary’ lived on its own and was not linked to any concrete events. Rather, it was an intuitive process of recording and reconsideration. What became the line of no return was November 2013. At the time, events, facts, expressions, and calls formed a formidable picture of a principled approach. For it was clear: either the ‘savage octopus’ will swallow us or, after all, a resolute step will be taken to strangle it. The result is that the octopus is still living, but have experience now – the people managed to cut off its tentacles. Fate decreed that, at the time of a turning point in the Donbas, I had an opportunity to publish texts in the newspaper Den almost round the clock. In general, acquaintance with Den is a separate story, which makes me reflect on the existence of such thing as fate.”

“In April 2014, when I came out of the SBU building seized by militants, it was clear to me that it was time to take action. Shortly before this, Den’s editor-in-chief Larysa Ivshyna had found me in Facebook among the cobweb of posts and comments and suggested that I write about the events in Luhansk oblast. I don’t know if somebody realized then that we were standing before the yawning abyss of a nationwide disaster, but my series of eastern publications began with a small article on the February ‘Svatove public assembly.’ Observations, analysis, and conclusions have formed a pattern on which you can study now how a peaceful, apathetic or even sickly area let in the flame of war.”

You spent quite a long time on the occupied territory – deprived of electricity and of the possibility to be in contact with the unoccupied Ukraine. Why did you choose this risk?

“Nobody asked me in fact. I was doing what I was supposed to do, and, thank God, I was in contact with readers before August 2014 owing to Den and the website day.kiev.ua. In September, when I managed to leave Luhansk, this contact was resumed, and the accumulated reminiscences and diary entries motivated me to write the book I, an Eyewitness. Looking back, I can see how important it is ‘to do what you must do, and what will be will be,’ as a popular phrase says. There was a hope in the second half of the last year’s summer that the Ukrainian troops would turn the situation to their advantage in two or three weeks. They did it. The Ukrainian army wan not just near Luhansk – it entered the city. Those who had called Putin ‘savior’ yesterday were saying today that the Kremlin hated and intended to wipe out the ‘khokhly.’ Before your very eyes, yesterday’s traitors were becoming patriots. When there was a power cut on August 2 and any correspondence with the outside world came to a halt, I thought I was to wait patiently a little and then fully devote myself to the city liberation cause. I never stopped recording and analyzing events.” 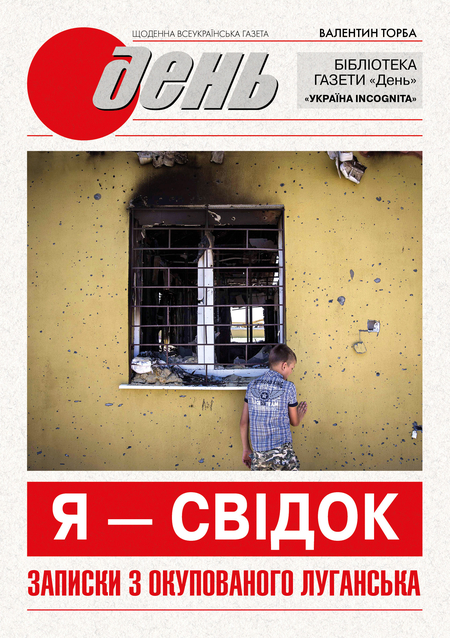 When did Russia really begin to occupy Luhansk – in the spring of 2014 or earlier?

“The occupation of Luhansk and eastern Ukraine began well before the tragic events in the spring and summer of 2014. The Donbas has never been turbulent. It was inert. There were attempts to stir it up, but it did not yield, humbly swallowing Russia’s generous propaganda. This war was lost on the part of Kyiv. As a center of influence, Kyiv did nothing to persuade this Ukrainian territory to consciously integrate into a single body of the state of Ukraine. I can say for sure that the occupation began with the occupation of brains. And the awareness of the grassroots in eastern Ukraine had no filters or roadblocks against the Kremlin.”

There is a myth that Luhansk residents are a separate, not exactly Ukrainian, “ethnos.” How can this myth be done away with?

“Luhansk residents are Ukrainian. The fact that somebody began to divide the Ukrainian people into Ukrainians and Luhansk ethnics is a consequence of the Kremlin’s evil scheme. This myth was imposed on us from abroad. There are no Luhansk, Donetsk or Donbas ethnics. There are Ukrainians, citizens of Ukraine, as well as turncoats, rogues, and traitors. The war has proved that belonging to the latter does not depend on ethnicity.”

What is your book aimed at in the final analysis?

“To write a book or an article is a deed. To put across people an idea which you have nurtured and achieved through suffering is a mission. I am grateful to Larysa Ivshyna for allowing me to accomplish this mission. I want people to know that there is no domestic conflict in Ukraine. There are only brazen and cynical provocations of Russian special services and the powerful Russian machine of ideological and other influence. If we fail to learn to resist this influence, we will be in a danger of being dismembered and destroyed. We are looking history in the eye today. And we must be aware of our responsibility for the future of our children. Will they be ‘re-baptized,’ renamed, or re-recruited? Will they be able to go through the fire of tests and preserve their national identity? All this will depend on whether we will be able to draw the right conclusions from our own history and mistakes. The book is not finished because we have not yet passed this exam. An awesome teacher is still looking at us sternly and waiting for a clear answer. The pages of my book are a search for this answer to a stern examiner named History.”