The coziness of this rubric certainly not to seek the newsbreak enthusiastically, but to look for something warm, undercurrent, intimate, that does not respond to intrusive curiosity but revealed only to empathy. Simultaneously, one should realize that our words are absolutely of material nature. Yet, the visit to Kyiv of David Datuna, well-known artist, one of the most expensive in the US, is so impressive an event, that the usual routine of playing this game should be put off for a while. Here it is, the business version of the essence of Datuna’s global cosmic project “Free Space” in Ukraine. Our country was among the first countries to have the plan in. The purpose of the visit is to introduce “Free Space,” which will be launched into space in cooperation with NASA in 2017. As was explained to me, David wants to collaborate with specialists from leading development companies (NASA and DARPA) in order to send an art satellite into space – and everyone will be thereby able to relay into the mysterious infinity their idea, drawing, musical phrase, picture of a loved one, wildest dream, sincere thought outside the box. Or, perhaps, it can be a feeling of remorse, regret, and of course hope … anything that the heart desires. The large “canvas” is absolutely democratic, open for free and unlimited use for everyone willing to contact, and will be preserved for thousands of years.

I can feel the overwhelming fantastical impact – being agitated by a special kind of freedom, gifted in its refined form, and an opportunity to become part of the large world, the universe, united with millions of strangers on the planet. I am sure that someone – or even many, especially children, – will meet their inspiration only from the sole possibility to say “I am, I exist.” Someone may even be able to rewrite their destiny developing a feeling that everything would be all right from that day. The inner life of a child, especially of one deprived of human warmth, is very dramatic, and the traditional outdated methods have little impact – they may decline the contact, or lose the ability to laugh. After all, we all laugh not because everyone is happy, but we are happy because we laugh.

“My ten-year-old son David, a.k.a. The Professor, should be considered a co-author of this idea,” said David Datuna Sr. “I observe him, I make friends with his classmates, even in many business trips he accompanies me, and sometimes we have up to 40 flights a year. I negotiate the time off for the child with the teachers, and with a heap of textbooks and homework we romp through the world. David is an insider at my art center. He is a visionary, inventor, and scholar, who helps me grasp what is now interesting to his peers. Not only the art should captivate, but also teach – how not to lose heart, how to slow down when necessary, how not to be silent when needed to speak up, how not to be frightened and not to betray. A today’s child can be reached, only not through outdated technologies. Sometimes David yawned listening to my plans and I realized that it wouldn’t work, it should be different. By the way, in my center he works part-time, receiving his salary and using the money on his own. Recently, he demanded a salary increase – I must say, quite reasonably – and I did it. In this project, we have become even more closer, the inspirational team-mates of almost the same age. However, when my boy called to learn how the things are going on here in Kyiv, how was it going with the project, and hearing my answer he replied as a grown-up, with ill-concealed vexation   – well, enjoy. He’s a little jealous one, just like the father. 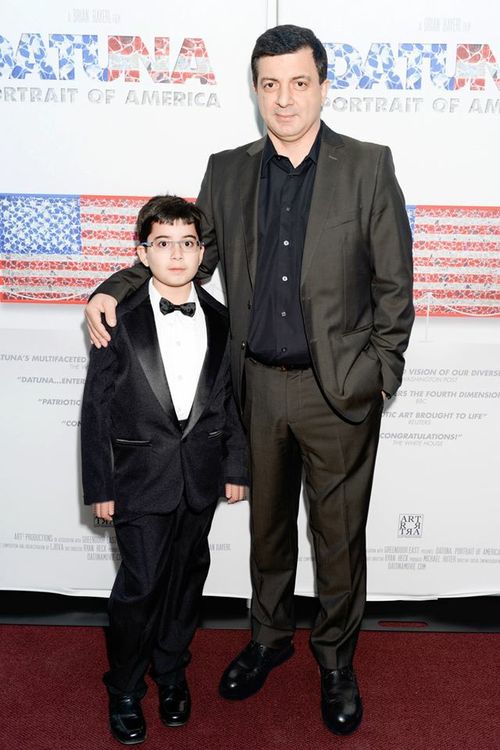 “The idea of this project came after a very difficult, even tragic period of my life. I heard the verdict of doctors and learned that I have left to live only three months, no more. Realizing that the illness knows it job, I started to mentally rush – how should I use my remaining time, what is the smart and most useful thing to do with it – a rational, pragmatic thing to leave something very important behind for my family, for the people. Apart from my wife and doctors, who were not chatty, no one knew about the diagnosis, and I decided to make a movie and talk about the grip, which gets people that hear such a sentence. Several artists I recruited had also promised secrecy and kept their words. I was always surrounded by extremely professional and honest people. Maybe I wanted to have someone to talk to about this or, standing over an abyss, I wanted to throw my energy, which was not broken by chemistry and radiation, in the work. But there was also something bigger – the desire to give hope. So, there is a film Datuna: Portrait of America, that, in fact, has absorbed a great desire to untangle the unravelable, to reduce the burden of despair, to take a step towards recovery, to bring about the happiness, the accumulation of which is much more important than the accumulation of capital. In fact, dying physically, I was caught in the creation, and it heard my plea and the rhythm of desire, it mitigated my doubt, and through sleepless nights it helped me realize the vast space on this small time. All that I am entitled to is contained within my past – and, thankfully, my future. In 2015 this documentary had gathered all the awards at the London Festival, which is unusual for a documentary film – and when the audience was applauding me, David Datuna, my boy David in a smart bow tie, also rose up, and the ovation even intensified. I would say the important thing – the new treatment technologies are developed without stopping, and the doctors have found some gene that was mutated, and by influencing it they were able to achieve excellent results, so I recovered. Can you imagine an impulse of vital energy that rose in me, when I realized that I survived? I wanted to do something extraordinary, and people usually trust and follow me. The best concept for administration is to hire professionals and not disturb them, naturally inspiring them by your plan.”

Listening, I was enjoying this childish adult, his confidence that anything is a game, and this is the only interesting way to live. I can only imagine the amazement in many government offices as he had just started to present his newborn idea. Perhaps he had to deal with a skepticism of close-minded people – but refuting the frigid logic, destroying stereotypes, fearlessly improvising, is a gift not everyone has. But in the end it can be seen that he had met enough enthusiasts with bold thinking. David Datuna has invested heavily in the implementation of his idea – of course, with government support and participation of like-minded people. The artist once again proclaimed himself very loudly, though he has already enough reputation that answering the “who are you?” question is unnecessary. The numbers of his exhibitions are huge, he no longer has time to visit every one of them. He had presented artistic projects using artificial intelligence and Google Glass, he made the famous portraits of iconic figures of our time made of optical lenses (Steve Jobs, Ayn Rand, and others). And now this new exciting project. By the way, for his anti-Putin exhibition “Putin, the collapse of civilizations,” he was declared persona non grata in Russia and considers that a compliment.

“Let it sound ostentatious,” he added, “but through my activity I want to make life better, kinder, if possible, to remove the destructive indifference. I can once again say that the world is still shocked by Ukraine, which showed everyone how to stand up for freedom. I am convinced that the world must help Ukraine more actively and give thanks that here, in your territory, in fact, the civilization was saved. It is your territory that contains the struggle between good and evil. That’s why Kyiv became one of the five cities in the world, where the project will be implemented and the freedom of ideas, thoughts, and dreams will connect people in space through art.”

Perhaps, our conversation might have ended on this note, but suddenly David allowed me to touch the energy of his ancestors and it has become more evident, that all these events are not a coincidence. His Georgian grandfather, Sergei, fought in Ukraine in the war of 1941-45, and visiting a friend Vania one day, he met his sister Hrunia. Of course, you have already guessed – he fell in love with the Ukrainian beauty. Soon, somewhere in the basement, they played a mini wedding with five guests. His daughter Venera was born to Hrunia already when Sergei was away – he fought in Germany, where he was blown up by a mine, losing a leg. He, in fact, almost died, his bloodied body was thrown into the morgue. Friend Ivan was restless, he asked, not wanting to leave his friend behind – he wanted to give his friend a decent burial, and, finally, he was allowed to pick up the remains. But when he got to Sergei, he realized that the friend is still alive. Vania stayed to help his comrade-in-arms in the hospital, but when the time came to return to Ukraine, Sergei said he did not want to return crippled and went to Tbilisi. Hrunia only saw her brother at the door, and exclaimed – “was he killed?” – and learning the truth she immediately took Venera in her arms and went swiftly to Tbilisi. The neighbors piled out a little room for them of clay bricks, in which they had two more children. One of the children is David’s father. The circle has ended: grandfather, honored three times with the Order of Glory, left leg in the war, then found love here, and then his grandson brings a cosmic scale gift to Ukraine. David also brought drawing sets for children from needy families, and for many it will be the only opportunity to participate in the project.

David Datuna is the most powerful personality. And David Jr., a.k.a. The Professor, should know that he is lucky boy to have such a father. The father, one must add, is lucky to have such a son.

The energy of the kin is the most valuable asset.

By Liudmyla ZASIEDA, special to The Day. Photo courtesy of the author
Issue:
№8, (2016)