Thursday is a day of premieres in movie theaters all over the world. A film by Ukrainian director Volodymyr Tykhy, Green Sweater, was launched in Ukrainian cinemas this time. The authors of the film defined its genre as a social thriller. I won’t say that I don’t have any complains about the picture, starting with its script, but I am sure that it will have its audience. Here the interest to the name of the director known to a certain circle of viewers and, hopefully, patriotic feelings, because national movies are not so frequent in Ukrainian movie theaters, will have their effect.

The film shows our days. In a sleeping neighborhood of a big city a seven-month-old baby disappears. After a month of futile search the boy’s elder sister starts looking for him. She is sure that she knows who the kidnappers are. Despair, guilt, and helplessness – are they enough to justify terrible revenge?

The project is quite demonstrative for Ukrainian cinema which is trying to revive – from the first open pitching, where Green Sweater got state funding to return to manual management of the branch. However, the same has happened in all spheres of governmental activity.

In this concern we found it interesting to talk to the producers of the film about the current state of affairs of cinema in Ukraine and possibilities of its development.

“THE ORGANISM HAS BEEN SOMEWHAT CLEANED TODAY” 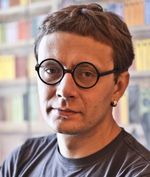 Denys, your team has been “sewing” the Green Sweater for a long time. Finally, the film has premiered. This project is remarkable because when it was launched there was a big hope to revive Ukrainian cinema, and you received state funding at the first open pitching. However, long before recent sad events vibrations started in moviemaking industry and its management. Can we speak today about some prospects of Ukrainian cinema? How are you going to work as a producer?

“This is a complicated question, although today, in spite of (or owing to) the events of recent months, the organism has undergone certain cleaning. Old things have been ruined, new ones have not been built. There are some structures whose tails are deeply rooted in Soviet times, but they are controlling the processes. However, for Ukrainian culture to assert itself, we need to sit down and seriously model the future, then the entire system, and make the past fit the future we will draw. Based on the world experience, the main way for Ukrainian cinema is the way of co-production. The most positive thing done by the State Cinema Agency, apart from becoming a separate body and funded new projects, a number of young directors emerged and entered the A class festivals. The world of cinema has more or less learnt their names, and this is a good starting ground for co-production. So, a number of people and structures emerged that are ready to work jointly. Further we need to move and develop this direction. At the same time, whereas previously we used to have two vectors of developing the co-production, together with Russia and the West, apparently, the former will for unpredicted period of time be closed or moved aside. I think today is the most interesting moment, when everything is invented, thought through, and some future is ready to take shape from the mistakes of the past. It is apparent that everyone in Ukrainian filmmaking process needs to retrain. It is not important, whether we will do this independently, or taking part in some of our universities. Professional education is of primary importance today. This is very interesting for me as a producer. We are going to organize a children’s festival, take a number of educational measures. Without this it will be hard for Ukrainian cinema to get on its feet, find its way in art and to the audience, both at home, and abroad.”

In today’s situation everyone who is involved in cinema, mass media, and television understand that we have untalentedly lost the information war. Cinema, since it was created, has always been a powerful instrument of propaganda. Do you have any ideas or plans in this concern?

“Unfortunately, cinema, like mass media, has to start with enlightenment work, which we must master quickly and qualitatively. Russia has preserved professional human resource and technical capacities from the USSR. If we want to take a different path, we should make this part of our culture policy. And fostering tolerance is the main part of it in any civilized state. Tolerance to different cultures, languages, religions, regional and sexual differences, etc. If it does not become the cornerstone of culture policy, it puts in doubt the civilized level of the state and society. In particular, what we have received is a failure of the culture policy of the state (if there was any), on the one hand. On the other hand, we should not underestimate the culture potential of cinema. Do you know why everyone so much admires the American cinema? Because there is a strong person who resists the system and wins, despite the problems of various levels of complexity. It’s the model people watch and want to copy. This has done more for forming Ukrainian society than all media altogether. Therefore we should think on creation of such stories, which not only will fix what is going on, but model the future as well. There is no doubt that today we cannot play direct propaganda, which counteracts the other side like a mirror reflection. This is inefficient. We need asymmetric answers, we need to find weak spots of the enemy, not be coping powers where we are hopelessly late.”

Green Sweater is the first feature film you’ve produced. The audience has not seen the film, but the film has already taken part in several festivals, won awards and festival audience. What are your forecasts concerning distribution?

“It is nonsensical to make predictions now, when the information field is absolutely different, and people’s behavior is little if adequate. For example, our expectations to Dallas Buyers Club, which Arthouse Traffic released last week, were much lower than it turned out in reality. We are releasing Green Sweater for limited distribution. Understanding that this is not a genre cinema, but so-called social thriller, we hope that the audience who knows director Volodymyr Tykhy, Babylon 13, movement of Ukrainian Angry (projects Ukraine, Good Bye and Mudaky), will be interested in watching the film.”

“WE ARE IN A TAKING-OFF SITUATION IN CINEMA”

Recently Ukrainian cinema has galloped from great hopes to bitter disappointments. You’re one of the main players in the field of national film industry. In your opinion, what is Ukrainian cinema of today? 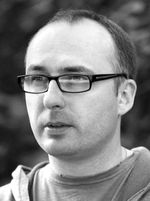 “In spite of the complicated situation in our country in the sphere of politics and economy, in cinema we are in a taking-off situation. The foundations of all our current achievements were laid three years ago. Green Sweater, Ukrainian Angry, Brothers. Everything that was submitted for the competition later became gradually weaker. To develop, you need to make films non-stop, without stopping the production. So that the quantity gave way to quality. You need to go back to what we tried to start several years ago – restructuring of the Fund of Cinema. I mean we need to spend money not only for cinema production, but start from the basis – the system of education. I am speaking not about the existing academic system of education which considerably lags behind the world models. I am speaking about the possibility to learn for young people, probably abroad, to receive grants for this, work and travel. Or invite here people who are able to give professional express education for talented audience, which will help them enter the orbit of modern moviemaking process. We are boiling in the juice of our own, and we need to integrate into the process that is taking place in Europe.”

The state of non-announced war de jure, which de facto continues, hardly envisages state subsidizing of cinema. Even at best times culture was not in the first lines of budget. As a producer, can you see any ways of existence for cinema and its financial support?

“I have just returned from Poland, where their national film awarding ceremony, a local analog of Oscar, took place. Together with director of Warsaw Festival Stefan Laudyn we were handing the award in one of the categories. I had an opportunity to talk to many top officials and leading participants of Poland moviemaking process. Unlike us, they correctly set the priorities of advancing of the country’s image in the world. This is culture and science. If the country is cultured, there are people who via art can influence formation of new kind of thinking, tell about crucial events, and processes that are taking place in their country. You can see with a naked eye what a big step ahead has been made by our journalism over the past five years, and compare this to Russian journalism – we have a pluralism of opinions. The same should take place in the sphere of culture – cinema, pictorial art, theater, etc. This gives us a broadness of opinion. And in difficult times, like today, we would not have economic problems, if we had a developed culture and science. Simply a number of intelligent people would have gathered and pointed clear direction of riding out the crisis of power, economy, and politics. I want to underline at the same time that really cultured people are at the same moral people. It has happened so that people, their minds have changed very much, and politicians cannot catch up with them. They have an absolutely different background. For example, you graduated from a university several years ago, and not all of the students of the same year or your group mates were your friends. But after some period of time passes, you meet one another with pleasure like old friends, almost partisans. The same is happening in Rada: there are 450 people who argue, even fight, but when they leave the hall, they are dearer to each other than people in Maidan. The reason is that they spend the lion’s share of time with one another. This is an effect of habit. And you correlate your principles not with those who revolt and insist on something behind the VR walls, but with those who stand next to you. And there are Regionnaires and Communists – what ethic can we talk about here? So, Europe, the US, China, Singapore understand that culture and science are a priority, but in our country people don’t understand this.”

During the Maidan events you were shooting mini films under general title Babylon 13, which turned out to be in great demand. Did you think of continuing this project or creating a different one, which could make a priceless contribution to the cruel information war, in which we are not winning so far?

“Babylon is a project which conveys emotions in pure form. Recently I have held a screening of these fragments in Krakow for scholarly association – I showed them 10 videos in chronological order. They understood much better what was going on here. At the moment we are actively negotiating with one of our leading TV channels the possibility to organize a discussion around these films. We will watch a film, then it will be discussed live with a feedback from the audience. I think it will help all of us to come to consensus. Apart from that, we are negotiating with Germans and Poles on making a feature film based on the shot and future materials. But in my opinion it will be possible only if we see at least some kind of a final in the offing. At the moment we are pottering around somewhere in the third act – neither heroes, nor villains have been defined. But in the final I can see several feature documentaries. Let’s think about good things and believe in a happy ending.”