Viktoria POLIOVA: “In Nepal it seems as if you saw things for the first time”

The horrible disaster which hit Nepal in early April is still fresh in the memory of many. The devastating earthquake (the worst since 1934) took away thousands of lives, erasing ancient monuments and entire villages. Ukraine had its part of the disaster: a terribly disorganized operation to evacuate our citizens from Kathmandu.

Among others, one of the most famous Ukrainian composers Viktoria Poliova was on the infamous plane. She agreed to tell us about what happened in Nepal in those days and about the general impressions of the trip to that mountainous country.

What experience did you expect to receive in Nepal?

“I wanted to go to the mountains. We limbed 3,500 meters high. But the Himalayas was just an external pretext, and internally I wanted to get rid of some civilization traumas, feel the holistic existence. And I received it to the fullest, more than I could imagine.”

What was the first impression?

“My daughter Tania and I arrived in India, in Sharjah, and waited for a connection to fly on to Nepal, but the airport in Kathmandu was closed unexpectedly: an airplane damaged the only runway. We spent a week in India, when the famous Hindu Holi festival began, with participants throwing colored powder at each other. We ended up in this whirl of color craze. Co­lors, laughter, fun, motion, spices, aromas – and stench, decay, terrible dirt, colorful as well – everything in one whirl.”

And what about Nepal?

“It is emotionally different. We were taken at night straight from the airport to the Chitwan National Park. And the first thing I heard there was breathing of a sleeping elephant. Two elephant cows, to be precise. My earliest impression of Nepal was one of a quiet world, quiet breathing, darkness filled with wonders that started emerging in the morning.”

It sounds like a description of a fairy tale that you end up in many years after your childhood had passed.

“Absolutely right. I felt like I was a little girl again. It seems as if you saw things for the first time, you perceive everything without the involvement of previous experience. Fantastic subtropical nature and elephants just walking around the streets, because they are domestic animals. We rode them the next morning. When you are riding an elephant, you need to synchronize with the rhythm of its movement. The motion of a huge body that you feel... Incre­dible, intelligent creatures. It looks at you and understands everything, sees everything. They are very friendly and kind to people.”

For how long were you there?

“For two and a half months. We wanted to spend more time there. Life is amazingly complete there. Tania said there is a special system of relationships between people in Nepal. But I had no idea how special it was.”

How exactly is it special?

“The Nepalese are children who are happy to see other children. All their community is built upon the joy of coexistence. They greet each other by saying Namaste, which means ‘the god in me sees the god in you.’ This is what relationships are built upon. Even if a Nepalese wants to cheat you, he does it so clearly and transparently that he himself laughs at it, and you laugh, too, and he understands that you understand. This is the game of relationships, which does not harm personality at all.”

All this considering the country is not wealthy.

“It is true, they are very poor. Perhaps, they survive thanks to this special attitude towards life.”

So, it seems that tourists are one of the few categories of income?

“Yes, but there is no treatment of tourists as a source of material profit. For example, people bring money to Thailand too, but they are hated there, due to some inner problems. But in Nepal you enter an atmosphere of general and personal inte­rest towards an individual, people start recognizing, liking, and being friends with you. This is joyful and it is directed at everyone.”

Have you found any important music parallels for yourself as a composer?

“Firstly, I was amazed to discover the origins of some of my works. This music came to me in various ways, and I heard and saw it in reality there for the first time. For example, Tibetan pipes, and how monks sing mantras in low voices, how they sound gongs, and play their traditional percussion instruments in general. What has been on the level of hearing, entered the texture of life. And another thing: the Nepalese dance a lot. Once we went to a mountain village of Ghorepani and heard drums and singing. I always follow the sound. It was in something like a basement, and elderly women were drumming and singing in shrill voices. We were shocked to see that men dressed as women danced to this music – with mustaches and beards, in very beautiful female clothing. I listened to it until I could stand still no more, and I joined the dance. Later we were explained that we had witnessed a rare moment, an incredible one: a secret transition from one caste to another. And when it came to wedding ceremonies in the streets, I have never missed a chance, just as I never missed an opportunity to play drums. As regards ideas for new works... I might stop composing at all.”

Where were you when the earthquake hit?

“Fortunately, we were in Pokhara, not in Kathmandu. The earthquake was not as intense, though you could feel it too. We were sitting in a cafe, three or four meters above the ground, when the table started shaking, and glass started shattering. I saw that the ground was moving in waves, that it flowed as if it were liquid, and we had to jump over these earth waves. There were a lot of shocks. No one stayed at home at night. Tents, sleeping bags, the whole town moved outside, like one large community, it sat on the shore of the beautiful Phewa Lake and waited for another shock.” 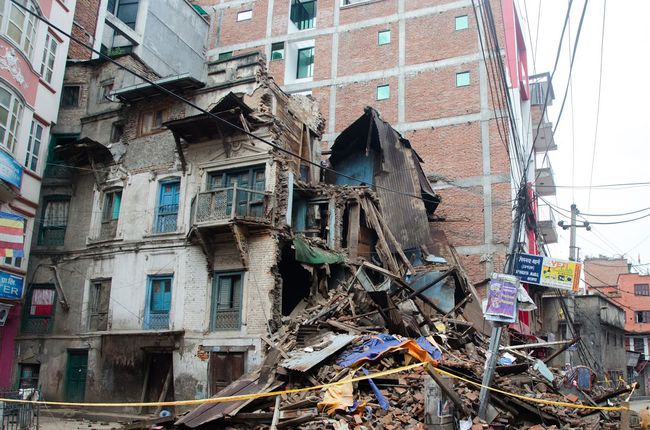 KATHMANDU AFTER THE EARTHQUAKE

“No. Something made me ask my daughter after the first shock: ‘So, dear, shall we accept the fate, whatever it is?’ ‘Yes, we will, mom.’ And after that I felt calm. However, I was a bit scared at the moment of mass panic, when everyone started running. This shaking affects not only the ground and walls, but the physical body as well, I felt nauseous. But there is no fear.”

When did you return to Kathmandu?

“In two days. We found a horrible scene. Just a while before that we walked those streets, among the wonders of the ancient civilization, and it was painful to see how it all crumbled into dust. The first feeling was that the city fell. The main square of Kathmandu, Durbar, was da­mag­ed badly. But then we were told that the Swayambhunath stupa remained intact, and then we visited Bodnath stupa, one of the main centers of Tibetan Buddhism, we saw that it survived, and the house of goddess Kumari did too, fortunately.”

What was the prevailing sentiment in the city?

“Grief... But people started smiling very soon. The Nepalese cannot do it in any other way. Tania and I went searching for our local acquaintances, and we met one trader, and he was happy we found him. None of his relatives or friends died, and his shop is on Freat Street, very close to Durbar Square. He was lucky. A lot of people were dug from beneath the rubble.”

“The Nepalese military, they worked effectively and smoothly. The Nepalese are very good workers in general, they know how to do things. The places of destruction were immediately fenced off, entrance was closed, volunteers were let to help only at the first stages.”

Was there any looting?

“I haven’t seen or heard of any. I think that the Nepalese don’t have it, with rare exceptions. They live differently. ‘I see god in you.’ How can you steal from a person you see god in?”

Did anyone help you?

“No one helped us personally. How­ever, we did not ask for help. But a lot of people lived on the premises of the consulate.”

Considering that the consul himself is Nepalese.

“Many thanks to him, he did a lot. He let peo­ple in his house, and what a house! A real paradise in the destroyed city. There were two more people: Zhenia Zhdanov and his mother, they volunteered to collect information about Ukrainians. They and se­ve­ral more people helped a lot. The whole evacuation story harmed them in the first place.”

By the way, what are your impressions of this situation?

“Totally stupid is the only suitable description. We could have be sent home at the very start just as India, China, or Poland did it with their citizens, without making the people suffer and lose their face. Shkiriak suggested a simple and easy scheme at once, but it happened otherwise: the jet was continually out of order, and packing such a jet full with civilians is total insanity, let alone feeding them like they did… I and Tania got some relief from seeing it as another adventure, albeit a lousy one. We could have just as well done without it, of course.”

Looks like our state has not learned a single lesson.

“Unlike the people. There was such a telling incident. There came a troop of journalists with the evacuation flight. They were constantly interviewing people, trying to fish out some cheap sensations, and suggested their own answers. You must know that no one said anything ne­gative. All sorts of people had been there, but all of them turned out to be so incredibly to­lerant and humble… It was then that I realized how much patience and forgiveness has the Ukrainian, even if there were enough reasons to kick up a row. Yet not a single evil word was said. I was touched and amaz­ed by that. I have also seen other things, disgracing against the backdrop of the disaster, but the overall emotion is joy.”

Do you want to go back?

“By all means. In February we are going again, I want to climb higher, where the snows lie.”

How did this trip change you?

“Like I said. I feel joy and peace. I only fear one thing: that this all is not endless.”