In spite of social environment

The Odesa-based artist Yevhen PETROV once confessed: “I paint what irks me.” The Vilnius branch of Kyiv’s gallery TSEKH is now hosting his exhibit “Where We Are Not.” The content of the finely painted monochrome watercolors confirms these words.

In general, the exhibit is about people who stay away from home. Among them are immigrants from impoverish countries, astronauts, and those who are only going to fly to outer space, the yakuza, and even the British queen. They all end up in very unusual situations: firstly, a long way from home and, secondly, the author immerses them into surreal circumstances. The crowd is waiting for the rocket that will take them to cultivate a new planet, and the tourists who splash around near the Doge’s Palace in Venice are attacked by alligators. At first, this enmity surprises you, but then it dawns on you that it may be a protective reaction to human stupidity.

THE QUEEN QUEUING FOR SUBSIDIES

“It is now a period of intense migration, and I pondered over what would happen to people if they found themselves in some remote point of the world,” Yevhen PETROV says. “It is very difficult to be an emigrant or a forced migrant. Sometimes the social environment repels people, and they cannot adapt. One is accustomed to everything at home, but there is no comfort in a different country. A half of my works show our people, but, in general, I mean not only Ukrainians, but also, for example, Latin Americans and the Chinese.”

Elderly women sell vegetables and other stuff near Cloud Gate, a famous sculpture by Anish Kapoor in Chicago. “I decided to put together something monumental, contemporary, and our mercantile people who have adapted to these conditions in order to sell something and make a fast buck. We want to quickly reap a benefit from anything,” the artist comments on the picture.

And British Queen Elizabeth II, with Corgi dogs by her feet, is in a line for utility subsidies. Next to her, sedate Ukrainian women are waiting to be received by officials. This watercolor, I’m after this Lady in Line, is the first in the series. I imagined what would happen if Queen Elizabeth came to us and waited in line to wring subsidies from the authorities. If this happened, our elderly women would not even notice that they see Elizabeth II, “Petrov says smiling. “In general, I like the queen as a character very much, for she is a certain symbol of stability.”

The artist is convinced that we should not strive to go where “the grass is greener.” “There’s no place like home. And it is terrible and sad that people have to migrate,” Petrov adds sadly. “My heroes are unable to find their way in the dire straits they get into. I put them in such conditions that they have to come back.”

Petrov’s pictures are viewed as satirical stories. This brings to memory the writer Yevgeny Petrov who, incidentally, once lived opposite the artist’s house. You first see the comic side, and then a far not-so-funny subtext emerges. “It is realism with a tinge of melancholy,” Raminta JURENAITE, a Lithuanian art critic, a professor at the Vilnius Academy, says about the watercolors. “These works compare life in poor countries with luxury. This clash between ordinary people absorbed in daily routine and those who live a privileged life is demonstrated very originally. This occurs very seldom in real life, but, in his fantasy, Petrov easily places one world into another. It seems to me Petrov is a very sad artist, but with a sense of humor.”

Ms. Jurenaite says that Petrov’s particular watercolor line is always present, but never dominates, in art. “On the other hand, I think Petrov is a very individual artist. He has a lot of specific and personal things. What and how he ‘narrates’ is very interesting,” the art critic says.

“TSEKH IS A GOOD EXAMPLE FOR VILNIUS GALLERIES”

“Petrov’s precision is at level of Japanese watercolorists, and his themes are multifaceted. His talent is undeniable,” says Vilnius ex-mayor Arturas ZUOKAS who initiated the revival of the city’s district Uzupis. This once neglected place is now an art center.

Incidentally, opening Petrov’s exhibit in late July, the Vilnius branch of TSEKH celebrated the first year of working in Lithuania. Mr. Zuokas emphasizes that the Ukrainian gallery is important for and even increases the status of Lithuania’s capital – above all, because it is the only representation of a foreign gallery in the city. “The TSEKH Gallery also shows that our countries are each other’s friends and supporters not only at the level of politics. There is such thing as culture – it is greater than politics and business. Cultural links are also developing at the level of private persons who create something by themselves and invest in various projects,” the Vilnius ex-mayor continues. “TSEKH is also a good example for Lithuanian galleries. Everything is done here on one’s own initiative. The gallery receives no money from the European Union, foundations, or other organizations. Everything is done on the basis of business. Moreover, thanks to this gallery, we in Vilnius can learn more about interesting artists in Ukraine.”

By contrast with Petrov’s characters, TSEKH has seen no aggression of the social environment in Vilnius. The first year of work in Lithuania was very busy for the gallery – in addition to launching its own projects, it hosted the award ceremony for winners of the Young Baltic Artists Prize and displayed Andrius Sarapovas’s kinetic music-generating installation. 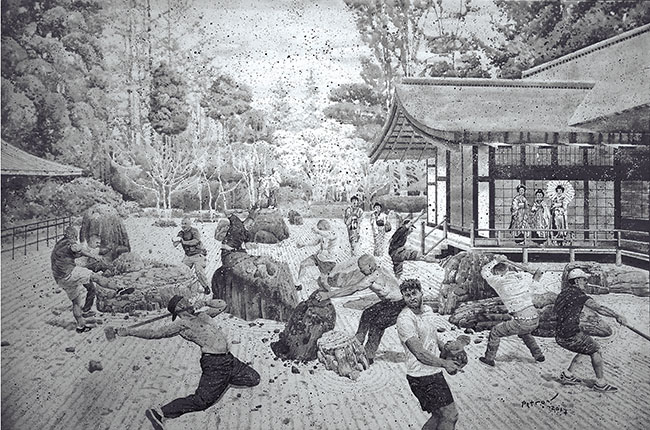 “We have in fact been in Lithuania for 10 years,” TSEKH founder Oleksandr SHCHELUSHCHENKO stresses. “Raminta Jurenaite once invited us to the Art Vilnius international contemporary art fair. We took part in it six times, we were pronounced the best foreign gallery and our painter Mykola Bilous – the best foreign artist. So, we are in the focus of Vilnius’ top professionals in contemporary art. The TSEKH Gallery was immediately recognized as a professional space.”

What is more, in Vilnius the gallery caters, above all, not to Lithuanian audiences but to collectors from other West European and Oriental countries. “Lithuanians are conservative and, unlike Ukrainians, hold their art in high esteem. Here, the biggest collector does not bring in ‘something Western’ and bombastic – he buys things of their own and builds a modern-day museum of Lithuanian art,” Oleksandr adds. “Yet we have a lot of allies here.”