Unity as the foundation of victory

On August 5, 1995, Operation Storm by Croatia’s army and police units reached its peak. That morning the Fourth and Seventh Guards Brigades seized Knin, capital of the so-called Republic of Serbian Krajina. At noon a Croatian flag was unfurled from the top of the Croatian royal city’s fortress. That same day other populated areas were liberated, including Benkovac, Slunj, and Kijevo, and Croatian troops reached the internationally recognized border with Bosnia and Herzegovina.

Croatia has celebrated the victorious Operation Storm, Victory and Homeland Thanksgiving Day, and the Day of Croatian Defenders for the past 22 years. This time the key events took place in Knin.

22 doves of peace and 22 artillery salvoes.

The names of all those fallen in battle during operation storm are solemnly read out.

Speeches by the president, prime minister, and the daughter of a fallen soldier.

Jets and choppers in an air show.

Flags of all military and police units that took part in the war.

Mass celebrated with a military choir.

Prljavo Kazaliste, a Croatian rock band that made its name in Yugoslavia and has remained at the top. They sing only about love.

The heat wave is at an incredible 420C.

Thousands of visitors from all over Croatia.

Ex-commanders of combat units and veterans recall details of hostilities.

A girl sporting a camouflage T-shirt says it is important to attend such events, to pay homage to the defenders [of Croatia], and that this should be done by all citizens rather than members of the combatants’ families.

A hip-looking organizer of the youth music king fest took the floor to give thanks for the victory (this festival is regularly held in Knin and the next time will be this September).

“Storm is the name of Croatian freedom,” said a Croatian TV journalist and anchorman, referring to what happened on August 5, 1995. 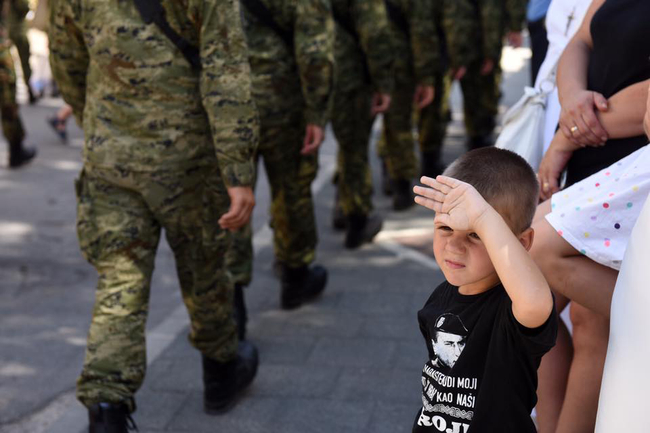 Victory Day festivities took place in other Croatian cities, mostly in the coastal resort area. There was a veterans’ march in Pula. In Zadar, guests and residents watched an air show with warplanes. The Homeland War Museum hosted a military photo exhibit. Huge documentary photos were displayed in the center of the old city where a gala concert was performed. Croatian Victory Rock Star Marko Perkovic Thompson gave a concert in Slunj, with some 10,000 – mostly young people from all over Croatia – in the audience.

A rally of protest against Victory Day took place in Zagreb before a mass for the Croatian Defenders was celebrated on August 5. Some NGOs, including ones based in Belgrade, others reportedly grant-based, demanded that the anniversary of Operation Storm be marked as a day of mourning.

In Serbia, August 5 is marked as day of mourning, commemorating the victims of Operation Storm. On this particular occasion, sirens wailed at noon and the churches and monasteries of the Serbian Orthodox Church served masses for the dead, in memory of the fallen Serbs. Fugitives, former residents of what used to be Serbian Krajina were still mourning the loss of their homes, sharing their grievous memories of 1995 events with media people.

Serbian Prime Minister Ana Brnabic declared that she did not understand how anyone could praise Operation Storm.

In Knin, Croatian functionaries formally expressed their condolences regarding the dead and the fugitives, saying they hoped the fugitives would return one day, that they would eventually mark Victory Day together. Croatian President Kolinda Grabar-Kitarovic stressed that all those ordinary Serbs had had to suffer because of Belgrade’s politics and an attempt to translate into life the pan-Serbian myth.

Almost a quarter of a century ago, the Serbian leadership decided to build Great Serbia. All they accomplished was to trigger a series of tragic events, including for their own people.

Here one would expect a couple of lines about an aggressor state that is eventually brought to account; about the danger of imperial ambitions on the part of heads of state… Conclusions from the experience of victims of an aggression are more important for Ukraine.

Ukrainian printed media has of late carried a number of materials with lessons from the “Croatian experience.” In actuality, the only foundation of victory scored 22 years ago was national unity, with each and everyone rallied round his Fatherland. This unity fortified the people and the political elite and helped them resist the aggressor and return the occupied territories.

Croatian politicians representing various parties, leading musicians, athletes, journalists, and clergymen are unanimous in describing those events: Victory in the Homeland War was doubtlessly a victory over the aggressor. Nikolina Mataj, daughter of a fallen Croatian Defender, spoke about the need to preserve unity in peacetime, while building their state:

“Those killed and missing in action were our fathers, ordinary family men, except that they were determined and brave. They gave their lives for their Fatherland and couldn’t help us on our way to adult life. We have properly honored their memory and will do so until our dying day. We mourn them and we are proud of them, of their kindness and love we felt while they were with us… We have enough grounds and motives for struggling to achieve the well-being of our country, for being as strong as our fathers were.” In conclusion, Nikolina called for preserving unity for the sake of their homeland: “Please, let’s stop fighting one another, let’s struggle together, let’s become a driving force, so the joy of life is felt in every home in our single Croatia.”

More than two decades have passed after the event, yet this determination to remain united, to work for the good of the Fatherland is still felt in Croatia. Small wonder that the Croatian people proved so strong and monolithic during the Yugoslav-Serbian aggression.