The Donbas stayed at home

On May 11, the Donbas saw a ‘carnival’ of ‘referendums,’ as citizens were asked about their stances on preserving the integrity of Ukraine, joining Dnipropetrovsk region and acceding to the UK. The ‘plebiscite’ held by representatives of the so-called Donetsk People’s Republic (DPR) was the best-publicized, though, with the only question on its ballot being “Do you support the Act of State Self-rule of the DPR?”

The ‘people’s referendum’ was held by separatists in schools, culture centers, and simple tents in the street. Long lines formed at the ‘polls,’ consisting mostly of the elderly. The main cause of the stampede was a shortage of voting stations in the region. ‘Electoral lists’ were absent at some of them, with people sometimes included in the lists on the spot, upon presentation of the passport or just on oral request. Some locals voted multiple times.

The vote count did not take long. Chairman of the DPR’s ‘Central Electoral Commission’ (CEC) Roman Liahin announced on May 11 night that 89.07 percent voted for the Donetsk Republic’s recognition, with 10.19 percent opposing it, and 0.74 percent of ballots were spoiled. Chairman of the separatist ‘CEC’ estimated the voter turnout in Donetsk region at 74.87 percent. Liahin explained his staff’s speedy work to the press by the fact that the situation in the region was worsening amid intensifying armed clashes. However, the DPR authorities have made no statement yet about the secession from Ukraine.

“The voter turnout at the ‘referendum’ was 10 percent”

Head of the Donetsk Regional State Administration Serhii Taruta told TV channel 1+1 that he did not recognize the results of ‘referendum.’ The Donetsk governor proposed to hold an alternative plebiscite concerning decentralization. “We need a referendum, one that would be legitimate, with observers and real electoral commissions. The president and the prime minister have agreed to this proposal of ours. We initiate a legitimate referendum to be held on June 15, it will be an advisory referendum on decentralization of power,” Taruta told the 1+1 channel.

Ministry of Foreign Affairs (MFA) of Ukraine provided official comment on the separatist poll. “Holding an illegitimate ‘referendum’ on May 11, 2014 on the status of Donetsk and Luhansk oblasts, which was inspired, organized and funded by the Kremlin, is legally null and void and will have no legal consequences for the territorial integrity and government structure of Ukraine,” the Department of Information Policy of the MFA’s statement reads. The ministry believes that the majority of citizens residing in Ukraine’s Donetsk and Luhansk oblasts ignored the vote. The MFA stressed that the Ukrainian people and the international community recognize “terrorist referendums” neither in Donetsk and Luhansk oblasts nor in Crimea.

“It is difficult to predict the further course of events at this point. Since local authorities were helpful to those holding the ‘referendum,’ it means that the Party of Regions will try to use the fact that it happened in the political horse-trading with the central government. For the Regionnaires, it was important to set a precedent, albeit illegal one, of making the impression as if the Donbas has expressed its will, and now we have to find a compromise. It is important that the central government does not succumb to these ultimatums, as the federalization of Ukraine should not be even discussed. I see the only way to stabilize the situation in starting the reform of local government without delay and urgently adopting a package of laws that will allow transferring major powers to local communities. The government should also trigger early local authority elections.

“There are no real results from this so-called ‘referendum.’ They created too few stations for the poll, and the purpose of this was to show the massive support for the initiative. Mariupol had only five stations, while 400,000 voters had to be served by at least 200 of them. Actually, we did not monitor the ‘referendum’ because it is an illegal action, and we had no desire to participate in it at all. My personal estimate of the voter turnout, partly based on what our representatives saw, is 10 percent. However, this figure, too, cannot be taken seriously because everything happened at gunpoint and under conditions of an information blockade. Russia will also refuse to recognize it officially, they will just take the results into account.

“Separatists themselves had a hand in discrediting the ‘referendum’ by their attempts to finish the count in just two hours and unsubstantiated statements they made regarding turnout, results and so on. It shows that they themselves did not see it as something serious. Another problem is how to disarm people who may perceive an attempt to do so as a betrayal. 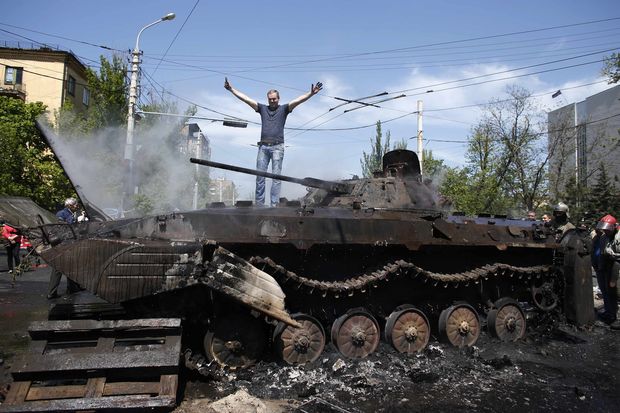 A MAN REACTS AS HE STANDS ON TOP OF BURNT-OUT ARMOURED PERSONAL CARRIER NEAR THE CITY HALL IN MARIUPOL, EASTERN UKRAINE MAY 10, 2014. AT LEAST SEVEN PEOPLE WERE KILLED AND DOZENS WOUNDED IN CLASHES IN THE PORT CITY ON FRIDAY, TWO DAYS BEFORE A REFERENDUM ON SELF-RULE THAT THREATENS TO PLUNGE THE COUNTRY INTO CIVIL WAR / REUTERS photo

“In general, the region has traditionally had a group of citizens with very mixed pro-Russian views. I would estimate this group at 30 percent of the region’s population. We have to work with them, show them that most problems of the Donbas are not associated with the central government, but with the activities of local elites who perceive the region as their resource for enrichment. We must restore the balance of information in the region. It is abnormal when the state does not control the information space on its own soil. Millions of residents of Donetsk oblast do not receive information from the Ukrainian media, so we can expect every support for separatists from them.

“Most residents of Donetsk region support a united Ukraine. Under no circumstances should we consider this fake referendum an important event, as there was no information campaign, no debate, and many people did not understand what they were voting for. I received a call from Yenakiieve saying that local grannies were sure they were going to vote for a united Ukraine, peace and unity. I think most people who came to the ‘referendum’ did it to protest against the central government’s actions and social injustice. Thus, I would not say that these people are really in favor of the breakup of the country.”