Last week President Petro Poroshenko announced that Ukrainian churches might soon unite into a single Ukrainian Orthodox Church. Last Thursday parliament supported the president’s proposal to formally request Ecumenical Patriarch Bartholomew to issue a Tome (decree) that grants autocephaly to the Ukrainian Orthodox Church (UOC) and pronounces the annexation of the Kyiv Metropolitan See by the Moscow Patriarchate in 1688 as null and void. A total of 268 out of the 334 registered MPs voted for this resolution. Most of those who voted against were Opposition Bloc members. Their faction leader Yurii Boiko accused the president of interfering into church affairs, and other members tried to block the rostrum. In principle, this behavior of former “Regionnaires” is quite predictable, for it is no secret that the pro-Russian rhetoric of these MPs serves the interests of the Moscow Patriarchate in Ukraine. Priests of the latter were even seen campaigning for Yanukovych in the temples of eastern Ukraine in the previous years.

Before speaking in parliament, Poroshenko met with primates of the Orthodox churches. Patriarch Filaret and Metropolitan Makarii gave the president on behalf of the Kyiv Patriarchate and the Ukrainian Autocephalous Church, respectively, an address to Patriarch Bartholomew with a request to recognize independence of the Ukrainian church. On the very eve of the vote, Poroshenko told MPs that there had been a years-long dialog between representatives of the state and the Constantinople Patriarchy and now the time had come for the UOC to receive autocephaly. He said in particular that “all local churches were recognized by way of the state’s involvement in this process. This is the demand of Constantinople.” The head of state also recalled that “it is Tsarhorod that Orthodoxy came to Ukraine from, and it is from us that it spread to Zalissia, where Ukrainian princes thoughtlessly founded Moscow.” These works drew a particular response.

On the one hand, the president’s statement and steps in this direction inspired a hope among the faithful that Ukrainian churches will become an integrated body, but, on the other, they raised doubts about advisability and realism of this unification. Undoubtedly, in spite of being formally separated from the state, religious issues have had a political subtext since very old times. No wonder, in the Soviet era the church became part of the state system. Priests themselves admit that, from then on, special services had a tremendous impact on religious affairs and appointments. Moscow’s imperial policy was in unison with the Moscow Patriarchate’s expansionism which did not stop even after Ukraine had gained independence. Moreover, priests of the Moscow Patriarchate took an active part in undermining the situation and spreading pro-Russian propaganda in eastern Ukraine and the Ukrainian Crimea. Thus Ukraine clearly showed a rift on the basis of not so much faith as attitude of believers and the clergy to Ukraine as a state. When Russia launched an active propagandistic and military aggression against Ukraine, the question of the role of church became still more topical, while the unification of Ukrainian churches became a matter of national security.

“My experience forces me to take a skeptical attitude to the presidential initiative of church unification,” Archbishop of the Kharkiv-Poltava Eparchy Ihor ISICHENKO (Ukrainian Autocephalous Orthodox Church) told The Day. “I have seen several campaigns of this kind in my lifetime: in 1992, 1995, 2008, and 2015. None of them produced positive results. Obviously, independence of the Orthodox Church in Ukraine from foreign centers is of dire necessity. It is a right step to turn to the maternal church in Constantinople. I was one of the first to write and speak about the necessity of coming under the Constantinople Patriarchate’s jurisdiction as a stage in the consolidation of Ukrainian Orthodoxy. Naturally, every patriotically-minded person wishes the endeavor to succeed. But it is a consolation for me personally that I, as a Christian, can feel to be rather free of political moments. The Kharkiv-Poltava Eparchy has been conducting a unification dialog with the Ukrainian Greek Catholic Church since 2015. This dialog is based on purely religious principles without interference of the political factor. It would be very uneasy for me, a Christian, to feel that I am a puppet in political games, all the more so that this political factor is obviously linked to the election campaign.” 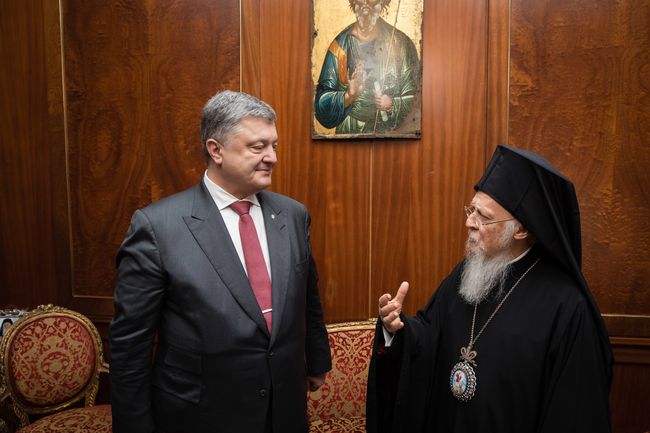 ON THE EVE OF THE VERKHOVNA RADA VOTE, PRESIDENT PETRO POROSHENKO MET WITH ECUMENICAL PATRIARCH BARTHOLOMEW AND SAID THAT “UKRAINE IS CLOSE, LIKE NEVER BEFORE, TO THE ESTABLISHMENT OF AN AUTOCEPHALOUS LOCAL CHURCH” / Photo by Mykhailo PALINCHAK

So, we can see that what hinders the unification of churches is not only the Moscow factor, but also the problem of relationship between Ukrainian churches. Of course, the unification of churches will eventually raise the question of the redistribution of governing functions. Who will concede to whom in this case? Some representatives of the Ukrainian Autocephalous Orthodox Church (UAOC) reprove the Ukrainian Orthodox Church, Kyiv Patriarchate (UOC KP), that its priests used to belong to the Moscow Patriarchate, while the UAOC dates back to 1921. The UOC KP in turn emphasizes that it has more parishioners than the UAOC does.

“We must draw a clear line. I cannot classify the problem of statehood as a political question,” Yevstratii ZORIA, Bishop of Vasylkiv, head of the information department of the Kyiv Patriarchy, UOC KP, said. “It is a self-evident truth for me that Ukraine’s statehood and independence is not a matter of political debates. Statehood is an axiom for all citizens of Ukraine. Unlike other religious traditions which have their own guidelines and organizational principles, the Orthodox tradition shows us that, as is written in the 34th Apostolic Canon, ‘the bishops of every nation must acknowledge him who is first among them.’ In other words, this tradition consists in the link between administration of the church and the nation and its statehood. Examples of this can be both the states where Orthodox believers are in the majority and the states were they are in the minority. For instance, there are local autocephalous Orthodox churches in Romania, Bulgaria, Georgia, and, after all, Russia. This is why Ukraine, as an independent state, and the Ukrainian nation also have this right. The problem of the rift in the Ukrainian Orthodox church, which was aggravated in 1992, is connected with the attitude to Ukrainian statehood and subjectivity of the Ukrainian nation. Putin says the Russians and Ukrainians are the same nation for him. In other words, they rule out the existence of the Ukrainian nation as a subject. Likewise, Russian politicians have reached a certain consensus in this matter – for them Ukraine does not exist as a state. They think it an ‘aberration’ of history. Accordingly, they believe there must be no Ukrainian church either. Therefore, the rift between the supporters and the opponents of autocephaly is based on the attitude to whether Ukraine is a sate, or it is a historical accident and is part of the Russian space. This aspect is particularly evident in recognition or non-recognition of church jurisdictions. Owing to its strong clout in the Orthodox world, the Moscow Patriarchate saw to it that the Kyiv Patriarchate found itself in an artificial external isolation. So even those Moscow Patriarchate followers who do not share ‘Russian World’ ideas, but who attach importance to canonical recognition, are still forced to remain under jurisdiction of the Russian church. But if the Ukrainian church is recognized, they will be ready to enter it. It is not my presumptions but the results of public opinion polls – two thirds of Moscow Patriarchate parishioners favor a single Ukrainian local Orthodox Church.”

“Why is the state requesting autocephaly in spite of Article 35 of the Constitution of Ukraine, and is this right from the viewpoint of secular and ecclesiastical law?” Candidate of Sciences (Philosophy) Yurii CHORNOMORETS asks in Facebook. “The answer is: the state is supporting the request of the UOC KP and UAOC episcopate. Governmental support for this request is an old-time demand of the Constantinople Patriarchate. When Archbishop Vsevolod visited Ukraine, he said the Ecumenical Patriarch would take into account not only the position of the clergy, but also that of the president, the Cabinet, and parliament. It is only natural that independent Ukraine, a centuries-old Orthodox country, has the right to autocephaly. Surely, dependence on Moscow is as nonsensical as having a joint army with Russia – after all that has happened, this won’t do.”

“The trust of parishioners is important for the church. Non-canonicity of the Kyiv Patriarchate does not prevent parishioners from going to UOC KP temples,” journalist Serhii RUDENKO wrote in Facebook. “Today, the canon is coming from parishioners. It is especially sensitive in wartime. For the Russian Orthodox Church, Ukrainians have been and will always be dissenters – not because we have created a Church of our own but because we have created a state of our own and broken away from Moscow. We must always remember this.”

The Moscow Patriarchate always speculates on the so-called canonicity of the church. This religious dogma is rather important to many parishioners, although none of the New Testament sermons mentions such thing as canonicity. Undoubtedly, this term is not so much a thing of faith as an element of inner church hierarchy. Nevertheless, the Moscow church quite effectively uses it to demonstrate its own domination. Of course, many consider the president’s actions as a pre-election step. Some politicians have even begun to speak jokingly about “forgiving Poroshenko’s sins” if the Ukrainian churches really unite to spite the Moscow Patriarchate. But we will have a hope that after we have requested the Ecumenical Patriarch to grant autocephaly to the Ukrainian Orthodox Church, Moscow will lose another lever of influence on our territory. At the same time, the UOC MP will face a serious problem because there will surely be a split among its parishioners.