He gave up power, not the hetmanate

Skoropadsky’s Ukrainian State and the unrealized alternative. What are the lessons?
Ihor Siundiukov

Illustration from the book The Skoropadskys: Family Album

Ninety nine years ago, on December 14, 1918, Hetman Pavlo Skoropadsky was forced to give up power. He announced this in an address to the Ukrainian people and left Ukraine – for good, as it turned out later. He gave up power, not the hetmanate. As time went by, the hetman’s political views were undoubtedly changing and noticeably evolving (as is known, he departed this life in 1945 in Bavaria). He repeatedly stated that he would never opt for such a desperate step as giving his consent to a federation between the Ukrainian state and the future “non-Bolshevik Russia” (which he did in the proclamation dated November 14, 1918, in fact under the relentless pressure of Western states after the surrender of Germany, the hetman’s main military and political ally). So when Skoropadsky was in exile, his views underwent an essential evolution, which is especially evident in his Reminiscences, a strikingly self-critical and wise book.

But what really matters is not so much the very fact of history – December 14, 1918 – as its interpretation from the positions of today. It was not a mistake but, on the contrary, a merit of the hetman that, in extremely difficult conditions of that time (a world war; continuous subversive activities of the Bolsheviks; relentless hostile propaganda on the part of the socialist parties, for the support of at least their moderate part the hetman seems to have sincerely, but naively, hoped; unwarranted interference of the German administration in the person of General Groener into the Hetmanate government’s affairs), Skoropadsky deliberately (!) set himself a goal to conservatively restructure the country stricken by an irreversible revolution. This meant clear and transparent slogans: “inviolability of private property,” “law and order,” “peace and creative work,” etc. Frankly speaking, this fearless act of his (without the slightest irony) seems to have followed the call of great Frenchmen, including Voltaire: “Be realists and demand the impossible!”

Skoropadsky failed to get his plans implemented. First of all, because of a deep dual rift in Ukrainian society – a rift among peasants, on whose support the hetman counted so much (the interests of large-, medium-, and small-scale landowners proved to be incompatible), and a rift among intellectuals, particularly the “left-wingers,” who refused to support the hetman, although the names of Vasylenko, Lyzohub, and Vernadsky speak volumes. All this had virtually fatal consequences. It is the Bolsheviks, not the national democrats, who turned out to be the alternative. But what the hetman did in seven and a half months is impressive. 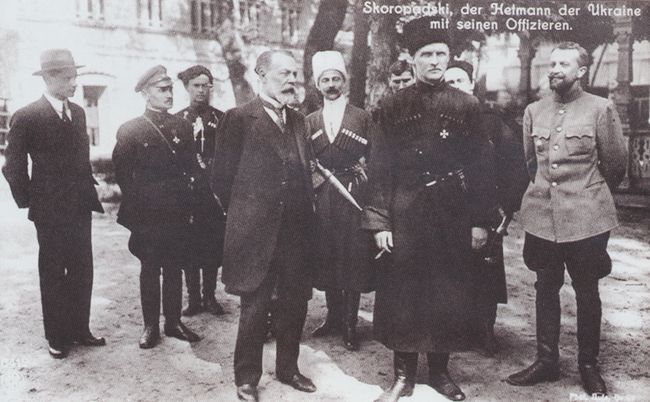 CHAIRMAN OF THE COUNCIL OF MINISTERS FEDIR LYZOHUB AND HETMAN PAVLO SKOROPADSKY WITH HIS ENTOURAGE. KYIV, 1918 / Illustration from the book The Skoropadskys: Family Album

“A STATE IS STRONG ONLY WHEN THERE IS AN INTERCONNECTION BETWEEN THE LEADERSHIP, THE INDIVIDUAL, AND SOCIETY”

“The hetmanate, as a system of power, had no strong support of society. It was established with the help of the German command and relied on the occupational army. This played a sad role, for Skoropadsky was in power for seven months only. Things seemed to be good in the country, state institutions emerged, but there was no connection with society. And a state is strong only when there is a strong link between the leadership, the individual, and society. If interests are mutually coordinated in this triangle, the government can function successfully.

“And, of course, external circumstances also play a major role. In this case, Ukraine had to act within the framework of the Brest Peace Treaty. Skoropadsky ‘inherited’ this, but the country banked on the Quadruple Alliance which lost World War One. This is why the victorious Entente states took a somewhat skeptical attitude to Ukraine, which deprived the latter of foreign political support. That was also a major problem at the time.

“Now about the agrarian question. If the hetman, who was restoring private property, had preserved the situation that had emerged in agrarian relations by the spring of 1918, when peasants took over a considerable part of landlords’ possessions, if the state had promised landlords a cash compensation for the lost land in the course of, say, 20 years, if peasants had been given the land which could be taxed little by little later, when the country was in peace and in order, and landlords could be paid off this tax for the land, we could have perhaps achieved the abovementioned coordination of interests between the state, the farm, and the individual. Unfortunately, the hetman failed to do so. He just formally restored the right to own land. As a result, landlords began to demand that peasants return not only the land, but also what they had taken away from their manors. This stirred up unrest in the country, which culminated in the Zvenyhorod-Tarashcha uprising. Then there were ‘explosions’ in other places, and the autumn saw the beginning of an anti-hetman insurgent movement which brought the Directory to power.”

“The lesson we should draw above all is that any historical event requires a well-prepared person. It is desirable that this person has a certain level of cultural, political, etc., knowledge. Unfortunately, Skoropadsky became a Ukrainian not when he wielded the hetman’s power but when he was in exile, where such people as Viacheslav Lypynsky ‘reeducated’ him. For us, today’s Skoropadsky is a person ‘molded’ in the postwar period by our conservative thinker Lypynsky who made in clear to Skoropadsky what kind of a person a Ukrainian ruler must be. Regretfully, Skoropadsky was not of this kind when he was in power. And it was one of the reasons why he failed to keep on this power. He proclaimed a manifesto of federation, which meant an end to the construction of a Ukrainian state. This occurred because he was always ‘between two stools’ and hesitated. This resembles the 1990s-2000s situation in Ukrainian politics: to be a little in Eurasia and a little in Europe. But one must always make a certain choice, even if it is difficult and brings along no immediate dividends. Sometimes this involves taking unpopular steps. The importance of a political figure depends on this. Skoropadsky can be blamed for not being a statesman of the level Ukraine expected. On the other hand, we should not criticize Skoropadsky too scathingly because he was a person of the era. He came to know about the Ukrainian movement too late – only when people approached him and suggested that he become the hetman. He was to turn from a Russian into a Ukrainian. This takes quite a long time. It would have been good if he had originally been the one he became after the defeat. But, unfortunately, he became the one later. I think it is our gravest problem. For it is about not only Skoropadsky, but also about other statesmen – both in the times of the revolution and at present.”

“On December 14, 1918, Pavlo Skoropadsky gave up power but did not give up hetmanship. He renounced power because he wanted no bloodshed which could occur as a result of the uprising the Ukrainian socialist and some of the liberal parties had been conceiving since the summer of 1918, well before the proclamation of the federation manifesto they referred to. The problem is not in the federation that was mentioned in this manifesto and allegedly triggered the revolt. The manifesto was proclaimed and the National Union-led uprising began almost on the same day. It is absolutely unjustified to link the uprising with the manifesto. The hetman was forced to take this step under the pressure of foreign political circumstances, when the Entente countries were trying to establish an anti-Bolshevik front. He issued this manifesto to avoid friction with the Entente. Meanwhile, the National Union had been preparing the uprising since the summer. Especially active in this were Mykyta Shapoval and Volodymyr Vynnychenko because of their political persuasions – absolute negation of the so-called Ukrainian exploiting classes to which, in their opinion, the stratum that supported Skoropadsky also belonged. Skoropadsky was trying as hard as he could to hinder the fueling of class hostility and prompt all the Ukrainian politicians to take concerted actions to reinforce the Ukrainian State. All these steps of Skoropadsky met with the stubborn resistance of Ukrainian socialists whose leader Vynnychenko used to say: either a socialist Ukraine or no Ukraine at all. Conversely, the politicians who followed Skoropadsky believed that it was necessary to maintain national unity, when the emerging state could hold a place for socialist, liberal, and conservative forces. One of the political tasks of Pavlo Skoropadsky’s Ukrainian State was to direct the relationship between all the political forces into a legitimate channel.

“National slogans must never be replaced by social ones, such as ‘Land to Peasants!’ and ‘Factories to Workers,’ while the state needs national unity. Comparing state-formation in the Baltic countries with what was going on in Ukraine, Viacheslav Lypynsky asked why state institutions and national statehood have survived there. The answer is: because the Baltic nations never revolted against the so-called Ostsee barons and the aristocratic stratum. They formed a single national front and prevented the Bolsheviks from suppressing their statehood. On the contrary, guided by their party slogans, Ukrainian socialists were breaking this front of unity. They viewed Skoropadsky as not a builder but a representative of the exploiting classes, thus absolutely denying the statist achievements which Skoropadsky undoubtedly had and which traditional Ukrainian parties did not have, even though they were also in power. And once they brought down the Skoropadsky government, the Bolsheviks came in their wake. No sooner had the Directory appeared than it was ‘kicked out’ of Kyiv on February 5. And they ‘loitered’ all over Ukraine without creating any stable governmental institutions.”