How safe the Ukryttia facility really is?

On April 26, the entire world commemorates the heroic liquidators of the Chornobyl disaster who protected Europe – nay, the entire planet! – from a terrible danger
Vitalii Kniazhansky

Friendly murmur of a dosimeter in the hand of our guide turns to threatening crackling as soon as the device nears the green moss islet, entrenched on the pavement of that deserted city. The guide tells The Day’s team: “Radiation is stronger where dust accumulates.” With some fear, we walk the streets of Prypiat, but we are told that tiles falling off walls present a greater danger than high radiation. Some rusty agitation stands and roofs still carry Soviet slogans which have withstood natural decommunization. We read: “The atom should be a worker, not a soldier.”

Today this is literally a dead city, with no soul around except for us. But the Chornobyl NPP is still alive, although it does not produce electricity anymore. Its only purpose now is to protect personnel and the environment from the still terrible consequences of the 30-year-old accident. At the company’s office, we were shown a model of the plant’s Unit 4, one that was hit during the accident. “If that wall fell, we would have faced a risk of the roof collapsing,” employee of the NPP’s international cooperation department’s Yulia Marusych told us when relating the story of the famous Ukryttia facility’s stabilization project, implemented at the Unit 4 in 2004-08. She pushed away the walls of the model, exposing innards of the destroyed unit in minute detail. 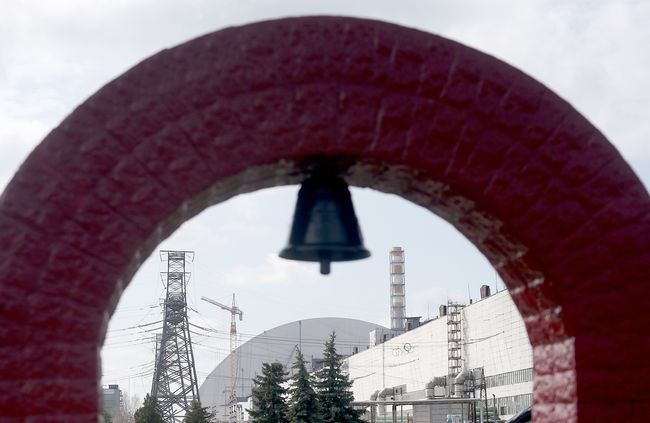 “As much as 80 percent of the load has been removed from it using new-built structures, and we could not remove it all because the wall would simply collapse then,” she continued and pointed to the new roof, which now protects the unit from receiving huge amounts of snow and rain water which accumulated at lower elevations and migrated even lower carrying radioactive materials with them. “And the water pumping effort failed, because there were and still are locations inaccessible to humans because of high radiation levels. Yet the facility is still leaking,” Marusych continued, “so water gets inside, and this is a serious risk for us. Therefore, construction and commissioning of a new safe confinement is an urgent task. It should be a tight shell designed to minimize emissions of radioactive dust (we have 4,000 tons of it) outside the facility. The stabilization project, implemented solely by Ukrainians, has given us 15 years to complete the construction of the confinement and commission it. Then we will have to finish all work to dismantle the Ukryttia by 2023, as its service life will end then.” 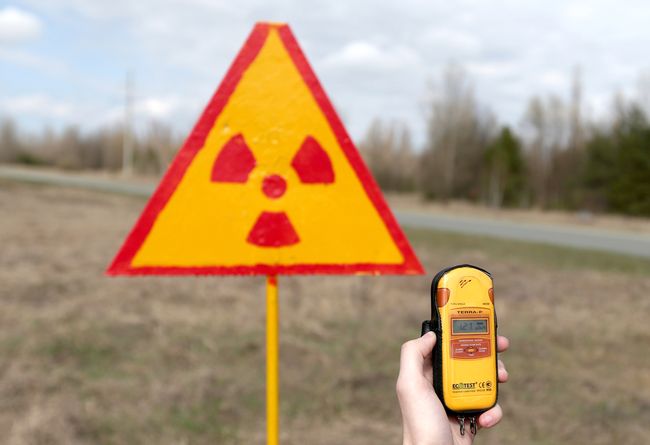 “How realistic is the plan,” asked a doubting journalist, “since the work would have to be done under very difficult conditions?” But Marusych was convinced that there was nothing impossible to it. However, risks are still there. We mean the fact that construction of the confinement is funded by the international community with Ukraine sharing the burden, while the dismantling of the Ukryttia is to be financed exclusively from the Ukrainian budget. “And this is the main risk, is not it?” The Day’s reporter suggested. “Not only that,” Marusych replied, “the greatest risk is that people will have to work under high-radiation conditions. Of course, there will be various manipulators involved. They are remotely controlled. But they also need maintenance. Even just outside the building where we are now, the dosimeter reads 490-500 micro-roentgen per hour, whereas, for example, Kyiv readings stand at 15-20 micro-roentgen. But the highest level is near the western buttress wall, directly at the turbine hall on the south side of it.” 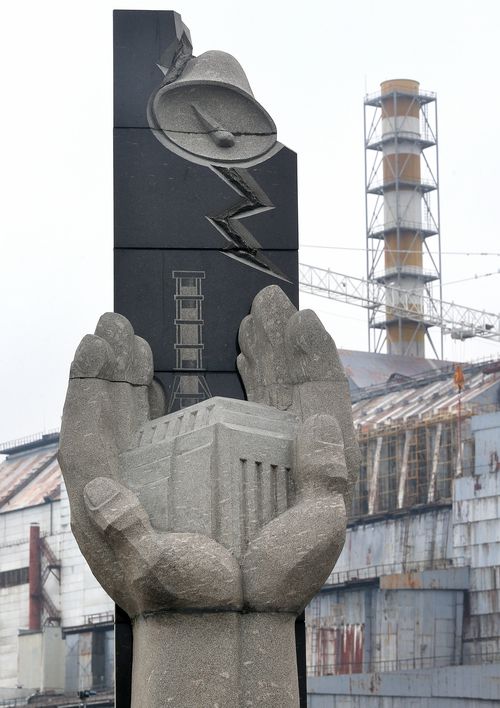 We then moved to the assembly ground of the arch, otherwise known as the new secure confinement. It is, without exaggeration, a cyclopean structure. It will cover the entirety of the accident-hit Unit 4 together with its smokestack, which, however, has had to be rebuilt and shortened somewhat. The chief contractor is international consortium Novarka, which includes French companies. In addition, certain complex subcontracting work is performed by other international companies.

The construction work involves 1,500 people, and almost half of them are Ukrainians, The Day learned from Petro Brytan, a coordination expert and a member of the construction project’s management team. Commissioning is scheduled for the end of 2017. “Installation of the arch is nearing completion,” the engineer told us. “Basic structures have been assembled completely. Internal covering is in final stages of assembly, while external covering is already here for you to see.” The expert told our reporters that the main building’s structure was approximately 80 percent complete. Moving confinement to the Unit 4 is scheduled for December 2016, it will take 10 days and will be carried out at a speed of 10 meters per hour. The facility’s commissioning is scheduled for the end of 2017. 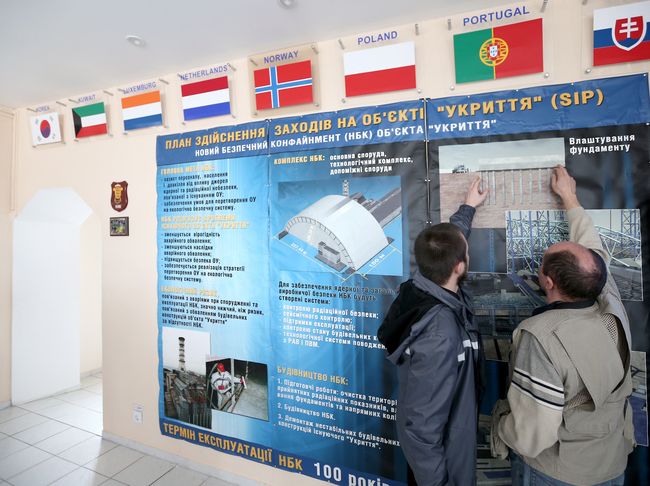 Confinement is the largest but not the only object that should ensure the transformation of the decommissioned NPP into the so-called “brown spot.” “Ukraine has decided not to turn any part of the exclusion zone, much less so the Chornobyl NPP itself, into a green lawn,” we heard from shop manager of the solid radioactive waste management and recycling facility Illia Shymkov. “We will never be able to completely clean the area of radioactive contamination. And it will not be fully returned to the national economy. How much money would we need to bury all the radioactive waste? It is not economically feasible. Our preferred concept is one of ‘brown spot’ rather than ‘green lawn.’ This will never be a completely safe space. Collecting and burying all matter that has undergone radioactive contamination in one location is an impossible task. Short-living radiation waste will decompose in 300 years, and the rest is enough to present a danger not only for us and our children, but as long as Earth exists,” said the scientist.

We came close to a small window through which we saw various manipulators. On our side, there were handles, buttons and levers. “This is the control post from which we control equipment that helps identify the characteristics of radioactive waste as well as manipulators that sort it,” Shymkov told us. “Now we are in the preparation stage that will take this year and almost all of 2017. As soon as we develop the necessary techniques and obtain metrological certificates, we will put it into trial operation. I think it will be in early 2018.” Shymkov believes that the facility will be tasked with eliminating (incinerating and burying) radioactive waste obtained during the dismantling of the Unit 4. “We will have enough work for a long time,” he predicted and expressed gratitude to the EU and its TACIS project, which invested in the creation of the facility and equipping it with the latest modern machines. 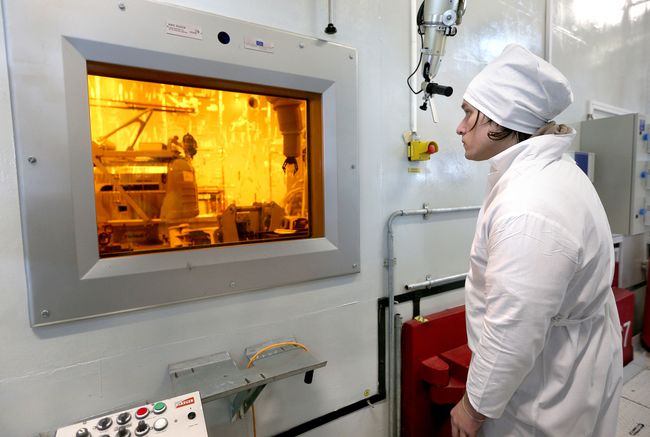 AT THE NUCLEAR WASTE PROCESSING FACILITY, ALL TECHNOLOGICAL OPERATIONS WILL BE PERFORMED BY MANIPULATORS

It is no secret that the Chornobyl plant holds not only radioactive waste, but also a large amount of spent nuclear fuel, which is still in the so-called holding ponds. How to deal with it in the future? The issue can be solved by building a dry storage facility for spent nuclear fuel (called SKhOYaT in Russian), where fuel, according to its stated parameters, can be stored for 100 years. One female journalist removed the first letter from the acronym and got the word sounding like “new life” in Hebrew. Let us treat it as a Freudian slip. Unless this nuclear fuel, still highly radioactive even if spent, is safely buried, the NPP will still remain a dangerous object and will not meet the requirements for a “brown spot.”

Deputy Ukrainian manager of the SVIaP-2 (storage facility No. 2 for spent nuclear fuel) project Volodymyr Duda introduced us journalists to it. He said that over the years, the Chornobyl plant had accumulated more than 21,000 spent fuel rods. The facility is being built for their long-term safe storage. Duda pointed to the large size of the building, reminiscent of Cubist architecture. It housed the spent fuel preparation facility, he said. The fuel rods will be cut into three parts, dried and placed into special protective containers there. The spent fuel will then be moved to the storage area, where concrete modules have already been built; the modules will be covered with special covers.

Duda told us the project’s complicated story. After an unsuccessful contract with French company AREVA, which was terminated in 2007, Ukraine immediately signed another contract, this time with American corporation Holtec International, the engineer said. The project was 80 percent complete now, he noted, and construction work was about 95 percent done. American and European plants are now manufacturing crucial technological equipment and, having made and tested this or that machine, supply them to Ukraine. “By the end of this year, we ought to finish all construction work and hold so-called cold start tests on simulators. We ought to finish them this year,” Duda suggested. “If they are successful, we will move to so-called hot tests using real fuel. We hope to get the operating license for the facility early next year, and begin to fill its cells with spent fuel.”

When asked by journalists, Duda explained that the construction effort was funded by donors whose contributions were accumulated on the nuclear safety account, managed by the EBRD, but he did not reveal the estimated cost of the facility, since the information, he said, was confidential. “Will the facility survive a missile attack?” The Day’s team asked. “It is designed for an earthquake of magnitude 6,” Duda replied. “As for missiles and shells, we have calculated it as well, and these calculations confirm that this facility is reliable enough and will survive being hit by ‘foreign objects.’”

Deputy director general of the Special Public Enterprise Chornobyl NPP Valerii Seida was the last to answer journalists’ questions. The Day asked him about money which would be needed to disassemble the Unit 4 after the confinement is commissioned. Will the Ukrainian government come up with public funding? “It is a quite expensive measure, and that is why we support the proposal to establish a new fund after the existing one (the Chornobyl Shelter Fund) terminates its activities,” deputy head of the NPP replied. “It should work along the lines of its predecessor, with management entrusted to the EBRD as well, because these are tried and tested mechanisms which work and which donors trust because they work.”