Why it is important to read Svetlana Alexievich

MOSCOW – People usually start reading books by authors who have made their name (as is often the case with Nobel Prize winners). However, this does not mean that they will read their message. It is important to understand the message conveyed by the Belarusian author, Svetlana Alexievich, whose non-fiction prose is about topics that are never broached by her colleagues in Russia and Ukraine. She writes about people who are creating a single totalitarian space in the east of Europe – not about Putin, Lukashenko, Yanukovych or Poroshenko, but about those who live in three Eastern European states. Each is doing it his own way, but the fact that Alexievich writes in Russian points to the main hero.

In Russia they stubbornly refuse to admit that people are not always holy. Let me quote from Lev Shlosberg, a Yabloko activist in Pskov who is a decent person, generally speaking: “There isn’t just an abyss between these individuals and the people. These individuals are innately hostile to the people and its interests, so that the prefix ‘non’ can precede the name of each body of authority – ‘Non-Council,’ ‘Non-Federation,’ and so on.”

This cliche distorts the reality, painting exactly the opposite picture. In fact, Mr. Shlosberg takes no interest in reality, considering that he refers to the Syrian leader as “Bashar Ashad.” Facts do no matter to him. Not coincidentally, he begins by stating that “Vladimir Putin has decided to return to the Major League in world politics at the cost of blood of Russian armymen.” Perhaps at the cost of Syrian/Ukrainian blood would be more to the point. Russian servicemen are dispatched to other countries not to die but to kill, yet Russia’s wars are still being described as though no one except Alexievich’s Zinky Boys [www: http://www.alexievich.org/ – 20 Sep., 2006 – in Russian. – Ed.] has died there and then.

Meanwhile the new Nobel Prize winner has long been writing about altogether different things. If people read her books, no one would be surprised to hear the parents of Russian officers taken prisoners of war in Ukraine confirm the official story about their discharge from the army, or the stern mother declare proudly in front of “Cargo 200” [army code name for a zinc coffin. – Ed.] containing the remains of her son that the man had died for the Faith of Jesus Christ.

Says Alexievich: “Russian people have fought for almost 150 years out of the past two centuries and never lived well. For them human life costs nothing and the notion of greatness is not well-being for the people but living in a big state packed with missiles. In this vast post-Soviet space, especially in Russia and Belarus where people were first deceived for 70 years and then robbed for 20 years, there have grown individuals who are very aggressive and dangerous for peace.”

That was just the beginning of a serious discussion. I might as well point out that I consider discussing Ukrainian affairs to be productive only when talking to individuals who realize that Ukraine will have to spend years without Crimea, Donbas, full sovereignty, European association, with most residents showing no desire to change anything, with a constant threat of destabilization, territorial losses, and Russian aggression. Add here the increasing integration with Russia in all spheres, on all levels.

It is obvious that those being co-opted into the new Ukrainian elite are not ATO participants or volunteers but their enemy. The struggle for freedom and independence has turned into intestine strife, with the population putting up with the loss of some territory and with limited sovereignty. 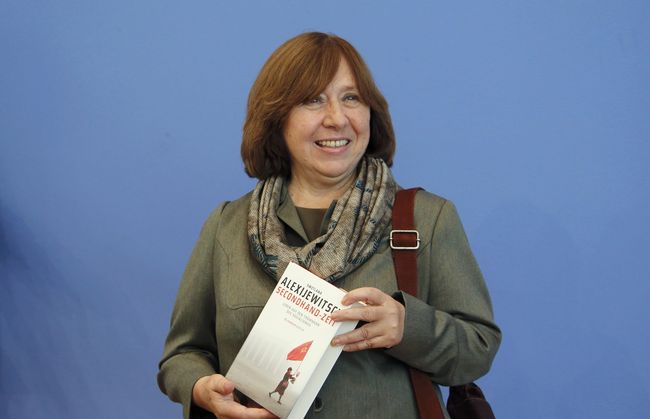 The rest is self-deception, like the vain hopes for destabilization in Russia and that this destabilization could be beneficial for Ukraine. For Russia, this war is a way to improve its economic situation. It will not bankrupt or weaken it. Linear logic does not apply to modern economics on a national or intergovernmental level.

The world has become unipolar. The Russian’s age-old dream of becoming an American – the way he sees him – has come true. The Kremlin is forcing Washington to surrender allies – first, Ukraine, now the Syrian opposition. Obama’s shame-on-you moralizing is for the birds. Considering that he has actually given up on Israel, the Kremlin’s hands are untied. The Middle East is as good as under Kremlin control. Everyone has noticed that terrorists in Israel started getting especially active after Russians began their operation in Syria, after Mahmoud Abbas’ visit to Moscow. I am convinced that Israel remains the Kremlin’s key objective in the Middle East.

Every participant in these events – Obama, Merkel, Hollande, and Poroshenko – has every right to believe that he/she is acting in accordance with the people’s – and electorate’s – will, whereas Putin can say that he is carrying out the will of the masses.

Mass culture and the media have finally proved that totalitarianism means power of the people, the result of the people’s choice. Totalitarianism is actually born of ineffective democracy, which is not necessarily a direct expression of all desires on the part of the majority. Otherwise no one would pay taxes (no one wants to pay them, anyway). Democracy is a method of forming an institutional system of management and selection of people to manage the system. Their task is to make decisions in the interests of the nation, society, and the state, and this does not always correspond to the will of the majority.

Resisting the Russian threat, Russian totalitarianism doubtlessly answers the interests of all civilized nations. However, this does not correspond to their desire, and fulfilling this desire is anything but democracy. It means building a totalitarian world. That’s what I have in mind when I say that the world is getting to be totalitarian.

Accepting this standpoint, seeing the world at this angle is easier said than done. This would mean discarding both the Russian tradition of honoring the people and searching for homespun truth, and the mainstream intellectual and cultural Weltanschauung concept that has evolved within the Judeo-Christian civilization after World War I. Not that such attempts have never been made. One is immediately reminds of dozens of names, among them Chesterton, Orwell, Reagan, and Thatcher. However, anti-institutional moods that took shape toward the end of WW I remain prevalent. For example, pacifism is a major tool in the totalitarian hands, as evidenced by the Munich experience and Stalin’s peace movement that became the Soviet Union’s strategic success.

Struggle for peace. This cliche has been compromised to the extent that no one dares use it in its original sense. And history has this struggle on record, including the Six-Day War started by Israel. These days events in Odesa, where the vatniks [lit., cotton-padded jackets; slang word for individuals with pro-Russian jingoist views. – Ed.] made sure they could burn to death in the fire they had started, are part of this struggle. The same is true of the mayor of Mykolaiv who ordered the riot squads to shoot to kill. He was bluffing, of course, but victors are not judged. No one dared call his bluff. Svetlana Alexievich is no pacifist, otherwise she wouldn’t write a single line. Peace is not achieved through exhortations and inactivity.

Totalitarianism can be stopped only by institutional democracy, with all its flaws and vices. Here the main thing is to do without innovations and improvements. Just primitive democracy, primitive bureaucracy, no spirituality, no passionarity, no driving inspiration, no direct democracy attempts, no syndicalism, no corporatism.

That simple? Of course not. Institutionalism and processability are becoming a weapon in the totalitarian hands unless they have man as the main component of democracy. The totalitarian institution-technology-masses formula means democracy minus individual. Alexievich has dedicated her life to a search for personal identity, studying the reasons behind individuals turning into masses, in the presence of outward conditions for a different kind of evolution.