Marcin BONDAROWICZ: “All of us are sitting a bit on a powder keg...”

Cartoonist from Warsaw speaks on “rabbits” in politics

The Day’s editor-in-chief has chanced upon one of the works by Polish cartoonist Marcin BONDAROWICZ on Facebook. As a media that for many years has had a unique school of cartoonists and has always made space on its pages for this genre, we could not miss an opportunity to replenish our “golden reserves.” Fortunately, the modern world allows establishing acquaintance and collaboration in one click of the mouse.

Marcin Bondarowicz was born in 1976 in Starachowice – town in northern Poland. His works have been published in more than forty publications, in particular Forbes, National Geographic, Poland Monthly, BusinessWeek, Newsweek Polska, Puls Biznesu, Cartoon Weekly (in Chinese), and Berliner Kurier (in German). Bondarowicz is also a participant and jury member of many an international competition of satirical newspaper illustrations. Many of his works are now kept in private collections in Poland and abroad.

How long have you been working in the genre of cartoons?

“I’ve been doing the satirical illustration for many years already. My debut was in the newspaper Puls Biznesu in 2004.”

What, in your experience, is the demand of the caricature in media? Especially the kind of caricature you make?

“Satirical picture is a global phenomenon that connects cultures through a universal message. This type of art is unique – first of all, because of its form, and also through the message it conveys. This is a continuous process based on hard work, observations, and finding the necessary shape to build one’s own metaphor – a story about what is the most important thing in life.

“The demand for cartoons has been and will remain at the same level. For me personally, satire in many respects is a means of attracting attention, a way to convey an appealing message that illuminates important issues. I think that this form of intellectual figure that makes one think is the starting point to the readers’ reactions.

“The illustration in the press is an essential element of today’s newspapers. Since the emergence of photography, human-drawn illustration gradually lost its principal task, which was to document the events, and began playing a role of an additional commentary on the text. By shifting the reader’s imagination, it sets a mood. It makes a newspaper page more attractive. It allows for space and air where text is stretched across the columns. It depends on the context, but sometimes a cartoon in a newspaper can exist as an independent work at the same level as an essay or commentary.

“My works are definitely not commercial, they are ambitious – I seek a deeper reflection. It is the respect to my readers and viewers, which still prompts me to ask questions in my art. And the answer to them is the fact that newspapers and magazines continue to buy my illustrations.”

How do you feel about the cartoons printed in Charlie Hebdo?

“I work for various newspapers in the world; sometimes they are very different in terms of political stance. But always try to be in harmony with my conscience and seek the truth in my work. I believe that the work of a cartoonist is similar to the journalist’s. It is actually a form of commentary on the events we have all witnessed.

“Charlie Hebdo is a media that has its rules established clearly. The provocation is crucial, and the form is often secondary.

“Watching the news, what is happening all around us, we see a lot of evil, tragic situations. We are bombarded by the Internet and television.

“And when the audience is somewhat desensitized, and the level of critical thinking is no longer bringing up any emotion in people, artists move in a counterattack, expressing their opinions loudly. However, I am in favor of more subtle dosage of such emotions.

“I believe that thinking ahead and educating the audience makes more sense than this form of shouting. I use several different means of expression and think one can draw attention to a problem without firing all the batteries at once.”

Are you familiar with the work of any Ukrainian cartoonists? Whose art do you like the most?

“Ukraine has a strong representation when it comes to satirical drawings. There are many good cartoonists with a strong position in this discipline. 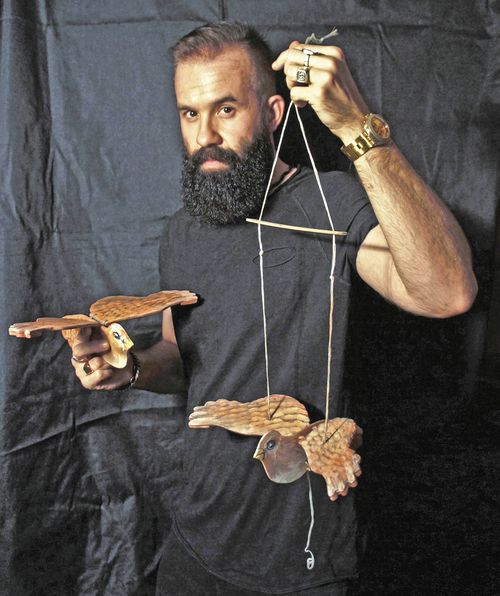 “I can name several examples of good cartoonists from Ukraine: Volodymyr Kazanevsky, Oleksii Kustovsky, Kostiantyn Kazanchev, Valerii Chmyriov. But many other cartoonists I did not mention compose the might of Ukrainian satirical drawings.”

What are the topics that influence your work the most?

“I am always affected by the human sabotage and social injustice. It is important to see the truth in order to be its carrier. For despite the vast distances that separate people in the world, I have to be near the reader and give more of me. A cartoonist’s keen eye will always find an interesting topic and a way to present it to raise certain emotions. Reality will not allow us to be ‘unemployed.’ Politicians always will give us themes for reflection.”

There’s a cartoon of yours that depicts rabbits around a table, on which there is a bunch of carrots, surrounded by explosives. This work reminded us of the meeting of the Ukrainian government. Did you make the picture with that in mind? What is it about?

“This work comes from 2014. It received the first prize in the final of the third wave of the competition that lasts the entire year – ‘Picture of the month: January-December 2014’ – ‘The best of the best. Drawings of the year 2014,’ organized by the Eryk Lipinsky Museum of Caricature in Warsaw.

“The original intent of the ‘rabbits’ emerged in response to the current political events of the time. It was in July 2014, and the situation around the so-called eavesdropping, which dominated the media environment in Poland in 2014.

“This picture is a kind of a comment on the situation. Searching for a metaphor I at once had the idea to express a perpetual feature of human nature and behavior that has no clearly defined connection to a culture, place or time.

“The drawing gained additional value in relation to the events following the terrorist attack on the satirical magazine Charlie Hebdo in France. The artistic intuition and the skill of finding the mutual understanding with the audience gave a new life to this work, which is so eloquent and sad at the same time, that the reflection it shows is not limited in time. It has been, and it will be the truth about us.”

The image of a rabbit – is it relevant to modern European politics, in your opinion?

“All of us are sitting a bit on a powder keg... The current difficult situation in Europe and the world leads to a strange situation of waiting for something to arrive. The fairly widespread reluctance of Europeans in regard of accepting migrants reflects on the policy of the European Union.

“No country wants to take responsibility for the critical situation associated with the influx of refugees. Muslim immigrant communities are causing fear in European society, which politicians often use to strengthen their position.

“This all does not solve the problem, but only makes it deeper. As the result, we are gradually losing direct control over the global economy and safety. It reminds me of the world and Europe before World War II.

“I do not want to be a bad prophet, but everything is moving in the wrong direction. And I express my concerns in the political commentaries in the form of cartoons. I do hope that there is still time for reflection and that we, aware of all the risks, will not head for the edge of the abyss.”