After the police arrested member of the National Assembly Nikol Pashinyan, tens of thousands of people came to Republic Square in Yerevan. Let us recall that Armenians continue to demand the resignation of Serzh Sargsyan – the former president of the country who served in that position in 2008-13 and 2013-18 and was elected prime minister by the parliament on April 17 despite protests.

Shortly before his arrest, Pashinyan, who is one of the protest leaders, held talks with Sargsyan in the presence of media, but they lasted only a few minutes and ended in nothing. Pashinyan demanded that Sargsyan resign, to which the prime minister replied: “This is not talks, not a dialog, it is just an ultimatum, blackmail of the state, of the legitimate authorities,” he was quoted as saying by the Armenian service of Radio Liberty. He also recalled the incidents of March 1, 2008, when 10 people were killed during the crackdown against protesters in Freedom Square. In response, Pashinyan said: “You do not understand the situation in Armenia. You do not enjoy the authority you think you do, despite what they are telling you. The power in the Republic of Armenia has passed into the hands of the people.”

On April 22, the protests took place despite the police stating that the demonstrations had been ordered to stop and warning people that they (the police) could lawfully detain the demonstrators and use force. A total of 232 people were detained, with 7 taken to hospitals. Among the detainees there were two more MPs, as well as chairman of the Analytical Center on Globalization and Regional Cooperation Stepan Grigoryan. People have pledged to continue protests until the prime minister and his cabinet resign.

The Day asked independent journalist from Yerevan David PETROSYAN to offer his opinion on the situation in the country and tell us what scenario of future developments was to be expected.

“It should be noted that unlike the events in Ukraine in 2013-14, the political agenda in Armenia is purely domestic. There is only one political demand for Prime Minister Serzh Sargsyan, namely to leave his office. There are no slogans or banners that point to any foreign policy agenda. Also there are no flags of any foreign states or organizations, for example the EU, NATO, etc. This is a purely internal matter. It is another matter that the initiator of raising this internal issue is a party that belongs to a bloc which demands withdrawal from the Eurasian Economic Union.

“On April 22, Prime Minister Sargsyan met with the protest leader Pashinyan, who is also an MP, leader of the Civil Contract party and chairman of the parliamentary faction of the Elk bloc (its name translates as ‘Exit’). Members of the public, experts, a number of international organizations called on the two men to hold a meeting in order to decrease tension. In addition, the newly elected Armenian President Armen Sarkissian was its initiator. It is hard to call the meeting a negotiation, it was held in the Armenia Marriott Hotel, where Pashinyan repeated his demands for the resignation of Sargsyan. He received a very tough answer, which implied that the authorities were ready to use force, and on a quite large scale too. In particular, Sargsyan recalled the events of 10 years ago that occurred on March 1, 2008. Properly speaking, the meeting ended without a result. About an hour after it, Pashinyan was taken into custody and then arrested. Two MPs from the same party were also arrested: Ararat Mirzoyan and Sasun Mikaelyan. Currently, Pashinyan is in the pre-trial detention center of the city of Sevan and has been allowed to meet with his lawyer. As far as I know, as an MP, he may be kept in custody for no more than 72 hours. After that point, some more specific charges should be brought and permission for further investigative actions and continued detention should be given by the parliament. 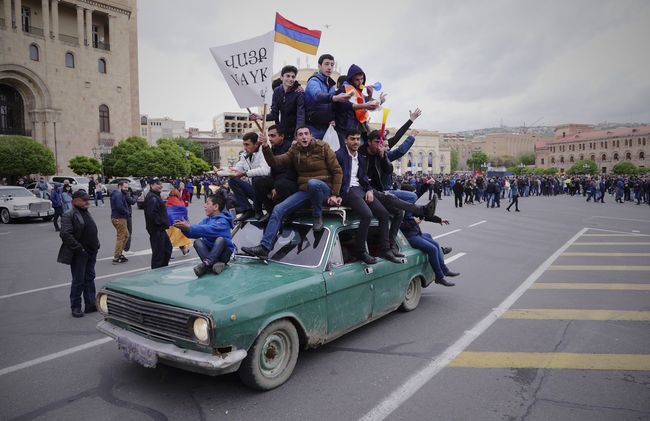 “Apparently, these tough actions on the part of Sargsyan, I mean the arrest of the protest leaders, were aimed at intimidating protesters, but the reaction has been exactly the opposite, as the number of participants in the rally has increased. While earlier, it was student youth that participated in the protests, now, having been reminded of the events of 10 years ago, members of the middle and older generations have come out to the streets as well. That is, the authorities aggravated the situation with their careless statements. That is why there were so many people in Republic Square yesterday [on April 22. – Ed.], probably more than ever, reaching up to 100,000.

“Today [on April 23. – Ed.], we have a student strike: college students do not attend classes and walk through the central streets of Yerevan instead. Tomorrow [on April 24. – Ed.], the nation will mark the Day of Remembrance of the Victims of the Armenian Genocide in Ottoman Turkey during the First World War. This is a memorial day, and also a day off. It is expected that people will come to the streets in huge numbers.”

Why did the protests erupt at all, and why did the candidacy of the prime minister who is a former president of the country cause such public resistance?

“By and large, he has never enjoyed high public support, although he was elected president twice. Both of his electoral victories were followed by large-scale protests, which ended in deadly clashes in 2008. However, this was not the chief reason, although the prerequisites for protest and discontent were there. The actual reason is that in 2014, when preparations were being made for transforming Armenia from a presidential-parliamentary republic to a parliamentary one, Sargsyan publicly announced that he would not run for prime minister and that all reforms were being enacted to make Armenia more democratic. And now it turns out that he, in fact, deceived the people. He did not keep his word, became prime minister, and the population no longer wants to see him in that position.”

What can decrease tension and calm the situation in society?

“I would advise people to be very cautious about making forecasts, because we have a chaotic situation now, as it is unclear with whom the government should negotiate, who will represent these people. Negotiations cannot occur in the spotlight of cameras. They must be serious. But you see, Sargsyan and his supporters derailed talks on several previous occasions during his stay in power. This is a serious problem. He is not trusted as a negotiator. We need very influential mediators who would enjoy the respect and trust of the society and be able to bring the parties to the conflict to the negotiation table. So far I have not seen such people, although there are calls for negotiations.”