“The Russian Federation has trouble annexing the peninsula”

Abolition of the independence of the Crimean Khanate in 1783 and the incorporation of Crimea in the Russian Empire are not as distant in time as they may seem. And since just over four years ago, Russia captured Crimea again, it is easy to understand that any mention of its first annexation touches upon the burning issues of our time as well.

Participants in the recent discussion (Catherine the Second signed the manifesto “On the Admission of the Crimean Peninsula, Taman Island, and the Entire Kuban Side to the Russian Sovereignty” on April 19, 235 years ago), held in the Crimea House in Kyiv, did not pretend for even a moment to hold a purely academic conversation about the deeds of the past. In this conversation, the past intertwined with the present, or, more precisely, the audience got reminded that this past has no intention of ending.

The main participants in the discussion were deputy head of the Mejlis of the Crimean Tatar People Ilmi Umerov, rector of Tavrida National University Volodymyr Kazarin, Candidate of Historical Sciences Gulnara Bekirova, and representative of the Ukrainian Institute of National Remembrance Bohdan Korolenko. The program director of the Crimea House Alim Aliyev moderated the event, but he rarely interfered in the course of the conversation.

The tone of the conversation was set by Umerov when he drew a clear parallel between the events of the later 18th century and those of 2014. In both cases, Crimea was initially granted ostensible independence (under the terms of the Treaty of Kucuk Kaynarca of 1774, the Crimean Khanate became independent of the Sublime Ottoman Porte), while de facto entering the sphere of influence of Russia, and then it was formally absorbed by the latter. 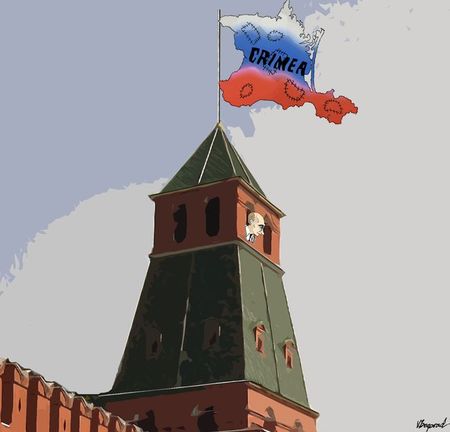 Bekirova put the first Russian annexation of Crimea on a par with the deportation of the Crimean Tatars in the mid-20th century. “A large-scale tragedy which contemporaries stayed unaware of,” was her take on that event. According to Bekirova, it marked the beginning of the “latent genocide” of the Tatars by Russia, which continues to this day. “For a hundred years after the annexation, our people were forced to think only of survival,” she said, adding that people “were leaving their land out of despair and humiliation,” and the peak of the emigration of the Tatars occurred immediately after the Crimean War of 1853-56. “Without the events of 1783, there would be no tragedy of 1944,” Bekirova summed up.

Korolenko went even further in drawing parallels between Catherine the Second’s time and our own. According to him, then as now, the annexation of Crimea was only part of a larger plan – in the earlier case, it was the “Greek project,” that is, the idea of reviving Byzantium (which has remained a mere project ever since). “Authoritarian powers are like that, they do not care about the lives of their own citizens,” Korolenko said, and explained that Crimea had a value for the empire of Catherine only as a military base, and the country’s foreign policy was determined by court intrigues. For instance, the “Greek project” was relevant only as long as the powerful Prince Grigory Potemkin was behind it. After the favor of Catherine was won by her new lover Platon Zubov, the external expansion of the empire was redirected elsewhere, to the conquest of Persia. The end of these palace intrigues came only with the death of Catherine in 1796.

Korolenko saw another parallel with the present time in the fact that Crimea was “flooded with money” in 1783. In the 18th century, Potemkin managed to corrupt the Crimean elite, both religious and political, the latter led by the last Khan Sahin Giray, which ensured the easy absorption of Crimea by Russia. In the 21st century, Russia failed to bribe the Tatar elite, but there was no need for it, as they bribed the autonomy’s top officials instead. Korolenko believes that this factor played the main role in the annexation of the peninsula by Russia, as only about 40 percent of its population participated in the so-called “referendum.”

The historian also posed another question: what to do after the envisioned return of Crimea? “We should not go there unprepared,” stressed Korolenko.

However, no proposals on preparing for this were made in the course of the discussion, even though we know that The Power of Law public movement, led by Crimean Andrii Senchenko, is actively working in this direction. That organization has already submitted the draft law “On Forgiveness” for public debate, and announced that it will submit another draft law soon, entitled “On the Transition Period.” These documents aim precisely to answer the question: what to do with our territories after deoccupation?

Umerov informed the audience that although a majority of Crimeans are still far from being anti-Russian, dissatisfaction is growing in the peninsula: starting in 2015, Crimea has been turning into a neglected region of Russia, the promised investment has not arrived, the growth of salaries and pensions has either stalled or failed to meet expectations. Such sentiments now dominate in the peninsula.