“The Silk Road is a success now…”

Beijing will soon get a museum dedicated to the most famous Ukrainian author, Taras Shevchenko. No, it is not a dream – the capital of China will get a cultural institution dedicated to the Bard of Ukraine for real. This is one of the most important results of Sino-Ukrainian cultural cooperation, which has already been officially announced at the Shevchenko-themed exhibition which opened in Beijing on September 10.

This story started in 2015, when the idea to translate Shevchenko’s Kobzar into Chinese appeared in China. Ge Baoquan, 73, started to do the translation from Ukrainian, and even learned our language for the task. Later on, the Sino-Ukrainian cultural communication gave rise to the idea to create illustrations for this translation of a collection of poems, which were to be painted by the most prominent artists of China Culture Academy of Painting and Calligraphy.

Among them, one should mention Qin Lun, the 79-year-old maestro and academician from Beijing who painted a portrait of kobzar Ostap Veresai and an illustration to Catherine. Meanwhile, academician and most famous Chinese TV star Dong Hao painted A Ukrainian House in the Village Moryntsi. Many famous Chinese artists contributed to the project. The curator of this process was vice president of Chinese Culture Academy of Painting and Calligraphy Alan Yu. Since August 2015, delegations of Chinese artists have been to Ukraine three times and, accompanied by chief curator of the National Taras Shevchenko Museum Yulia Shylenko, they visited museums, famous places associated with the poet, and got acquainted with the illustrations and portraits of Shevchenko. Inspired by the picturesque landscapes of Ukraine, creative legacy of the Ukrainian poet and his biography, Yu led talented Chinese artists to create their works, including portraits of Shevchenko, illustrations to Kobzar, Ukrainian landscapes and characters in different styles of Chinese calligraphy. Although pictures ultimately failed to be published as illustrations in the Chinese version of Kobzar, the organizers decided to hold several exhibitions, first in Ukraine, and then in Beijing. So the first exhibition was held at the National Taras Shevchenko Museum in Kyiv in the spring of 2016, and the second one at Kaniv’s Chernecha Hill (see The Day’s No. 44 of August 11, 2016). 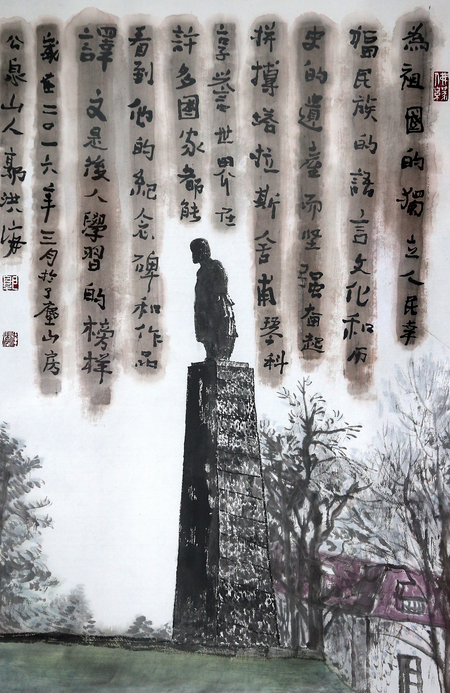 This project also involves third president of Ukraine Viktor Yushchenko, who provided a traditional Ukrainian towel from his personal collection for the exhibition in Beijing. “Yu came to Ukraine about 10 months ago, and someone suggested that he meet with me,” Yushchenko commented for The Day. “I said I would be interested to look at Shevchenko, his world and characters of his works through the prism of the Chinese artists’ vision. We talked also about the fact that given the recent 200th anniversary of the author, we ought to republish the Chinese Kobzar of 1954. So we had a whole portfolio formed, which gave rise to the idea to hold a Chinese exhibition in Ukraine.”

“In China, I had a few meetings dealing with economic and educational issues, but also met with presidents of the three art academies of China, and we agreed that they would support this initiative, and a group of Chinese artists would come to Ukraine, visit Shevchenko’s memorial places, his grave, relevant museums, and would create Shevchenko-themed works within a month of the visit,” Yushchenko continued. “Should they succeed, they would exhibit at the National Taras Shevchenko Museum, and then come back and we would have an exhibition in China featuring Ukrainian decorations and Chinese works. Thus, it has gone full circle, and we have succeeded nicely in everything.”

So, the grand building of the Museum of World Art in the heart of Beijing hosted two significant events on September 10, both named “Traveling the Silk Road.” Their opening was dedicated to the 20th anniversary of the Chinese Art Collectors’ Association, which sponsored the event. The museum had two exhibitions on display. The first, called “Unfading Fame: In honor of the Bard of Ukraine Taras Shevchenko,” featured works by Chinese artists which were gracefully and harmoniously decorated by towels from the Yushchenko collection. The second exhibition, called “Boundless Rivers and Mountains,” showed works of Li Geng, one of the most famous Chinese artists, who also took part in preparing illustrations for Kobzar. Li serves as the director of the Artists’ Association of China, and his name is known worldwide.

At the opening of the exhibition, Ukraine was represented by Viktor Yushchenko, Ambassador to China Oleh Diomin and his wife, head of the National Academy of Fine Arts Ostap Kovalchuk, chief curator of the National Taras Shevchenko Museum Yulia Shylenko, and founder of the Cossack Lands of Ukraine Museum Volodymyr Nediak. The Chinese attendees included, in addition to artists, head of the Chinese Art Collectors’ Association Luo Bojian, deputy head of the China National Academy of Painting Lu Yushun, professor at the Institute of Fine Arts at Tsinghua University Wang Yuliang, and many others. The host of the event was famous Chinese TV anchor Dong Hao.

“If we talk about the place that Shevchenko holds in the hearts of Ukrainians, they see him mostly as a Hero,” Dong remarked. “Shevchenko is one of the creators of the Ukrainian culture, so we have invited everyone to visit the exhibition dedicated to this outstanding person in the Millennium Museum and to get better acquainted with him. And his soul is still with us, in our hearts, even though he is not here anymore.”

“Our association turns 20 this year, so to mark this date, we have decided to implement several projects and are opening two events, as usual,” head of the Chinese Art Collectors’ Association Luo Bojian remarked. “The ‘Unfading Fame’ exhibition, dedicated to the illustrious Bard of Ukraine Taras Shevchenko, has brought together works created by many of the most famous Chinese artists who were able to establish contact with the heart of the poet, to recreate his life and bring it to the Chinese audience. I am very glad that we are seeing traditional Ukrainian weaving art works here as well.” As Luo Bojian shared with those present, “Shevchenko’s legacy first reached the Chinese audience back in the 1920s, and over 40 Chinese translators and scholars have translated his works. The 1950s saw the Chinese especially drawn to the illustrious Bard of Ukraine. Today, we are seeing here paintings by more than 30 Chinese artists who recreated the life of Shevchenko to support the Sino-Ukrainian friendship,” the head of the Chinese Art Collectors’ Association noted.

During the official event, Ambassador of Ukraine to China Oleh Diomin took the floor as well: “In my opinion, collectors are gatherers and preservers of traditions, people who convey beauty to us, contemporaries, and preserve it for our descendants. It is wonderful that now, just as we are celebrating the 25th anniversary of Ukraine’s independence, we have the opportunity to receive such a gift from our Chinese friends. It is the idea to look at Ukraine through the eyes of Chinese artists, to express its history and especially the work of its famous son Shevchenko that has been the basis of this project.”

In a later comment, the ambassador told The Day more about the broader context of this exhibition, namely the Silk Road, which Ukraine is now a part of.

“The Silk Road, which the Chinese have reminded the whole world of, is not only an economic path, but also a cultural one,” Diomin noted. “Flow of cultures, perhaps even of the ornaments that we see today, was enabled by civilizational exchange between countries. What is happening in our bilateral relations with China today fits very well with that kind of citizen, cultural diplomacy that combines the mutual interests of our countries and provides tools for these interests to work.”

Finally, vice-rector of the National Academy of Fine Arts and Architecture of Ukraine Ostap Kovalchuk took the floor and thanked everyone involved in the organization of the project.

“The Silk Road is a success now. Like wagons of old traveled the Silk Road from China to Ukraine, so today we have seen the best Ukrainian historical fabrics come to China,” Kovalchuk noted. “This year, the best exhibition halls of Ukraine, ones we call national institutions, hosted six exhibitions of China Culture Academy of Painting and Calligraphy. Moreover, Taras Hill in Kaniv, where an exhibition dedicated to Shevchenko was held, is almost as revered by the Ukrainians as the grave of Confucius in Qufu is by the Chinese.”

Kovalchuk stressed that the exhibition in Beijing was the culmination, but not the end of cultural cooperation between China and Ukraine. “The Taras Shevchenko Museum in China was launched in Beijing today with the assistance of Li Geng and on the premises of his academy,” he said. “All dignitaries, including the president of Ukraine, will join the governing board of this museum, and all relevant Ukrainian and Chinese organizations will have their representatives there. Li and his colleagues have honored vice president of China Culture Academy of Painting and Calligraphy Yu Gen Hui (Alan Yu) with leadership of the museum. During this period, Yu became a friend of all Chinese and Ukrainian artists involved. The museum should have its own collection, so all the best works of this exhibition will be transferred to the collection of this museum.”

Thus, newly appointed director of the Taras Shevchenko Museum in Beijing Yu received a rare book about the Bard of Ukraine created by great Ukrainian artist Academician Mykola Storozhenko. Significantly, he received the book from Storozhenko’s Chinese student Chen, who is a graduate of the Kyiv Academy of Arts and now teaches at Beijing. This gift has become the first item in the collection of the Taras Shevchenko Museum in Beijing.