Ukrainian culture as a test

“Decades later, this will be recalled as the ‘doctors’ plot’ and 1937,” Natalya Sharina, ex-director of the Library of Ukrainian Literature, says after a Moscow court ruling

No sensation has occurred. Natalya Sharina, former director of the Ukrainian library in Moscow, was found guilty on all counts and given a 4-year suspended sentence. As the sentence says, “the court has thereby found the defendant guilty. Sharina committed offenses aimed at stirring up interethnic hatred and enmity as well as humiliating human dignity. She also misappropriated money for lucrative purposes.”

The court handed down this ruling, although defense attorneys convincingly proved that investigators had often forged material evidence. Sharina herself commented on the sentence as follows: “When books are planted and material evidence is falsified, it is not even an injury. You think: where are you? This really stuns me!” She also added: “It is a political case. I have been a librarian for 35 years. Destroying the library seems to be of benefit to them. I am sorry for the library. There was not a single extremist book at the library. Sixteen extremist books were planted on me.”

Well, the “Basmanny justice” [allusion to Moscow’s Basmanny Court. – Ed.] has prevailed in Russia again. The defense lawyers of Team 29 with Ivan Pavlov are going to appeal, but they are standing almost a zero chance of success. The case is too political for the court to risk making a fair decision, abiding by the letter and spirit of the law. The only possible way out of this situation is that a higher court will commute the suspended sentence or grant the defendant an amnesty. This will totally depend on the political situation of the moment. If Vladimir Putin chooses to show unprecedented liberalism to the country and the world on the threshold of the presidential elections, Sharina’s sentence will be commuted as much as possible. But if the president considers playing in liberalism a passing fad, the sentence will remain in force without any essential changes. Yet the accusative nature of the ruling is sure to be confirmed in any case. 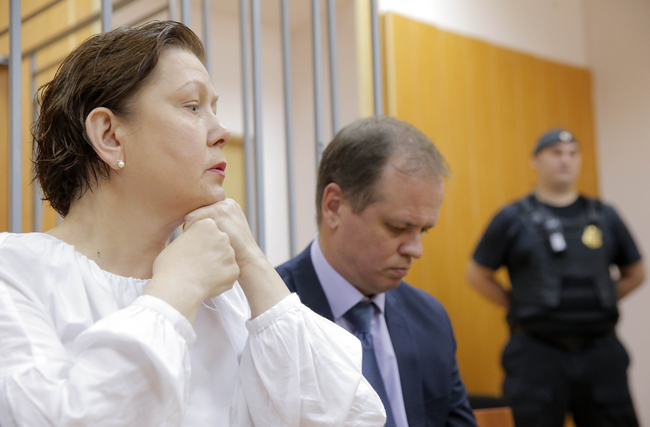 It will be recalled that the “Sharina case” was opened in October 2015, when the director of the Ukrainian library in Moscow was arrested on the basis of a lawsuit filed by Dmitry Zakharov, member of the Yakimanka Municipal District Council, and writer Sergey Sokurov, formerly a library staff member. Some “extremist literature” was allegedly found at the library. However, even leaving aside the outright falsification of evidence by investigators, it is necessary to emphasize that a library is just a place to keep all kinds of literature, including the extremist one. It will occur to nobody to sue the directors of academic libraries for keeping, say, Hitler’s Mein Kampf, for you can’t possibly study the history of Nazism without reading its leader’s main book. But in this case the intention was to “expose Banderaite schemes” in Moscow and resist any manifestations of Ukrainian influence in Russia.

The Library of Ukrainian Literature in Moscow has long been a thorn in the side of the authorities. They set a goal to take control of and oust all things Ukrainian from it. So they trumped up an extremism charge which was so crudely devised that the case went to pieces in court. And, if there were normal justice in Russia, an acquittal would be inevitable. Now the Ukrainian library in Moscow has in fact been liquidated on the pretext of the extremism case. The Government of Moscow resolved on September 20, 2016, that holdings of the Library of Ukrainian Literature should be transferred to the Center of Slavic Cultures established in late 2016 at the Rudomino Library for Foreign Literature.

Official human rights advocates responded to this sentence very cautiously. Mikhail Fedotov, Chairman of the Human Rights Council under the President of Russia, said in particular: “I think it is a half-hearted decision. On the one hand, it is a suspended punishment, but, on the other hand, it is an accusative sentence.” Then he added: “I wouldn’t like to comment on this sentence before it has entered into force. But after it enters into force, the council will be able to comment on it.” It is difficult even to comment on this attitude. Is it really a human rights organization if it is afraid to voice its stand on a high-profile case and is going to speak on this matter only when the appeal is predictably dismissed and the Human Rights Council is no longer able to influence anything? This means they will just shake their fists after the fight is over in order not to irk the Kremlin.

But the human rights activists who are independent of the Kremlin have speedily criticized Sharina’s sentence. For example, Amnesty International said that this sentence “demonstrates utter contempt for the rule of law and highlights serious flaws in the independence of Russia’s judiciary.” And Denis Krivosheev, Deputy Director of the Europe and Central Asia Program, directly linked the unlawful conviction to the Russian-Ukrainian conflict. “The prosecution has exploited the highly charged anti-Ukrainian atmosphere that is prevalent in Russia at the moment, while the court simply dismissed key evidence for the defense, including testimonies that police officers were seen planting the banned books at the library,” he said.

The case of “extremism” at Moscow’s Library of Ukrainian Literature shows very well, among other things, the true attitude of the Russian authorities to Ukrainian culture. They are prepared to accept it as something “ethnographically theatrical.” Dressed-up Zaporozhians in loose pants, with long moustaches and forelocks, girls and boys in embroidered shirts, who sing folk songs – you are welcome. But do not even hint at the present day, especially politics! From the Kremlin’s viewpoint, even if Ukrainian culture has ever existed, it was very long ago, in the 17th-19th centuries. But there is and there can be no self-sufficient and perpetually valuable Ukrainian culture in today’s “Banderaite” Ukraine which has broken away from Russia.

You can still speak of Taras Shevchenko and Nikolay Gogol, but you must always emphasize that the latter was a Russian writer. But you must not even mention Vasyl Stus or Ivan Bahrianyi. You can sing only certain Ukrainian songs, such as “Halia Carries Water” and “A Cossack Went beyond the Danube,” but you must not perform “Red Viburnum Tree” or “Over There, on Makivka Hill.” And Moscow would like all of Ukraine to be asking its “big brother” what it can and what it must not do.