A Ukrainian “hop” to Mars

The Mars Hopper drone designed by a team of Kyiv scientists to explore the red planet has been one of the most talked-about subjects in the past few weeks. The project won the People’s Choice Award in NASA’s Space Apps Challenge Hackathon.

The Ukrainian designers suggested an innovative way of moving across the surface of Mars, with the economy of fuel being its main advantage. The hopping drone uses Mars’s solid carbon dioxide as propellant.

As a result of the online vote, the Mars Hopper aircraft took third place at first, polling almost 25,000 votes. But organizers reexamined the votes a week later, and the project received the People’s Choice Award.

The NASA hackathon winners are going to visit the flight control center when a new satellite will be launched to a meteorite, which will allow academics to analyze the surface of a space body for the first time. 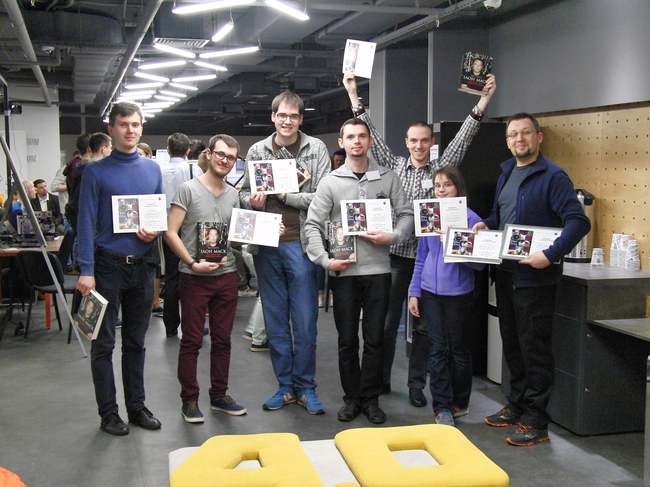 Incidentally, the US National Aeronautics and Space Administration have been holding Space Apps Challenge hackathons since 2012. The international competition was held simultaneously in 170 countries. This is the first time a space hackathon was organized in Ukraine.

The Day spoke to equipment engineer Andrii MUZYCHENKO, one of the Mars Hopper designers, about how the project was conceived and what implementation prospects it has.

“To begin with, there was a boot camp three days before the hackathon, when the organizers told us about the directions in which we could develop products – there were about six of them. Some of them were about Mars, some about Earth, and some about other space topics.

“As far as Mars is concerned, the organizers wanted the teams to develop a transportation device, for example, a jet pack. It is a backpack with fuel tanks and rocket nozzles, which allows a person to fly for about 10 minutes. But this is ineffective because too much fuel is spent – all the more so that there will be no fuel on Mars to fill this backpack. Besides, it is very difficult to fly a man to this planet because the environment is very hazardous there: a high level of radiation and no air to breathe with. Conversely, the atmosphere of Earth can protect us from cosmic radiation, and the air allows us to breathe freely. 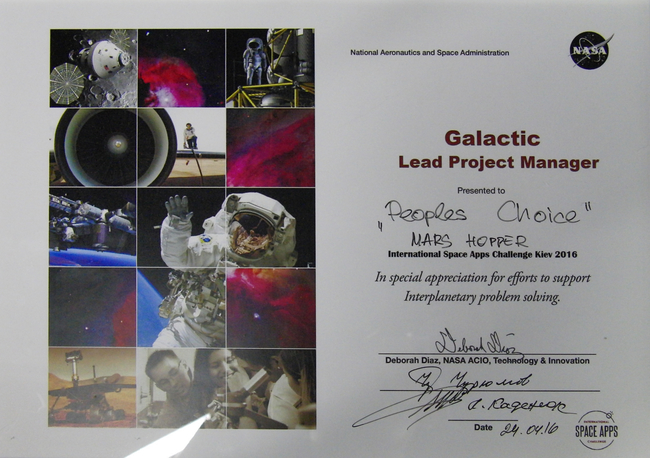 THIS IS THE FIRST TIME THE NASA SPACE APPS CHALLENGE COMPETITION WAS HELD IN UKRAINE. UKRAINIAN DESIGNERS PRESENTED OVER 200 PROJECTS IN THE SPACE HACKATHON

“So the team decided it was not worth doing so and began to make a transportation device. But fuel was a stumbling block again.

“Later, the 11-year-old Sofia, Oleksandr Butkaliuk’s daughter, suggested using carbon dioxide. The point is that the Martian atmosphere consists of carbon dioxide (CO2) which forms dry ice ‘caps’ on the planet’s poles at low winter temperatures. In this case, it would be a good idea to make a drone fueled by CO2. This kind of drone could extract CO2 from Mars’s polar caps, reprocess it from one state of matter into another, and use it as an actuating medium. The main operating principle of this engine is pressure difference. We feed fuel, and the pressure that goes through the turbine will bring the mechanism into motion.

“I was not personally at the boot camp and entered the team during the hackathon after seeing a NASA advert. Moreover, this has interested me since my childhood.

“Incidentally, none of our team members is closely associated with space exploration.”

Would you explain why you have won now, although you came third just a week ago?

“At first, one project was chosen from each location for the People’s Choice Award. On the whole, there were more than 1,200 teams in 160 locations. Then they were shortlisted to 25 and, later, to 5, out of which the winner was finally chosen.

“Then NASA checked the votes – it’s a standard procedure. Incidentally, when NASA began to review the votes, they decided to look at comments in social networking sites. We had the greatest activity on Facebook. As far as I can see, that was the peak of activity during the entire hackathon.”

Are there any similar projects to explore Mars’s surface? What will the “hopper” do on the planet?

“There is a NASA project called ARES. It is a drone which is to be delivered from Earth to Mars and can fly 1,500 kilometers there before just turning into junk. It can draw maps and measure atmospheric data. But it is a very expensive single-use toy that uses a lot of rocket fuel.

“But when the Mars Hopper lands, it can scoop the so-called dry ice from the Martian surface. Then it processes it from one state of matter into another. 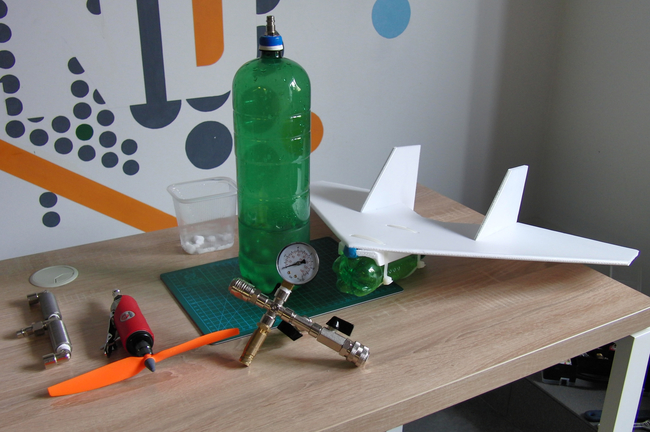 A MOCKUP OF MARS HOPPER. WHEN BUILT, THE DRONE WILL LOOK LIKE AN AIRPLANE THAT WEIGHS ABOUT 200 KILOGRAMS AND HAS A WING SPAN OF 8.5 METERS

“It can also make an analysis of the surface, when landing. When it ‘distils’ the so-called dry ice (CO2) from one state of matter into another, it can also analyze the substances it collects together with this ice. But there is not only CO2 in the polar layer. There is also water there, which we will need if we ever fly to that planet. Of course, it may be of a little different structure because radiation and other Martian particularities have an impact on this.

“The drone can also gather atmospheric data, make cartographic surveys, and compare the data it has collected before.

“Moreover, it can even be equipped with a small drilling device.

“When the ‘hopper’ takes off, using a minimum of CO2 for its rocket boosters, and reaches the altitude of five meters, the pressure that results from polar layer matter treatment is fed to the screws of an unusual design. When Mars Hopper lands, the screws fold, and when pressure is fed to them, they began to open up owing to centrifugal force. So this helps us save fuel. The drone can also calculate by itself where to land.”

How long can the “hopper” stay on Mars?

“Ideally, it will function during one Martian winter – six months. For example, Curiosity, which is also making analyses, has made not so many trips. It has gathered a lot of information, but not about the atmosphere, and it has done no mapping. Yes, it can drill a hole and shoot at stones with a laser. But it is insufficiently prepared to do something on a greater scale.”

To what extent has Mars been explored now?

“Our project focuses on exploring Mars’s atmosphere, for things keep on changing in this field. And we will be able to gather data on these changes. This will have a very good effect on the future landing on Mars, too. For example, if we do cartographic surveys, we’ll be able to find a region that has water. Elon Musk is toying with the idea of demolishing the polar caps and creating a glacial period on the planet. But this costs very much, and even if they decide to do so, we will be able to give them concrete information on the structure and cartography of a cap.”

NASA has been holding Space Apps Challenge hackathons since 2012. Why did it take place in Ukraine only now?

“Ukrainian enthusiasts themselves suggested that NASA hold this hackathon in Ukraine. NASA renders no financial assistance. But they supervise hackathons in every country and guarantee that the winners will visit their center. In addition to Kyiv, a hackathon like this was also organized in Kirovohrad.”

The State Space Agency of Ukraine has already contacted you and suggested carrying out a joint project. How effective can this cooperation be?

“We are now having a dialog with them. So it is too early to comment on this. But they have a lot of possibilities and resources. This is the first year the agency was fully funded. So they are open to cooperation and remain astonished to see that some people, who are not practically associated with space exploration, have come together and made a breakthrough. So the time will show. We are going to negotiate for another week or two.”

Did NASA refuse to further develop this project?

“NASA’s main goal is to arouse interest in the space field. We remember a space boom in the world when the Soviet Union still existed – the launch of the first sputnik, the flight of Gagarin… In the US, astronauts flew to the Moon, space shuttles were launched. At the time, people were crazy about this, and the whole country could work in order to launch one rocket. But today you may be told that nobody is interested in this, although commercial launches are quite profitable.

“Just a few years ago, Richard Brandon alone said they were planning to build a plane that will make a short suborbital flight, stay in weightlessness for 5 minutes, and get back. This was the ultimate of what was being done in this field from the commercial viewpoint.

“In other words, there are colossal prospects in the development of this branch. This is why NASA is prompting people all over the world to make local products and develop the space industry.”

What technological difficulties may emerge in the making of Mars Hopper?

“The main problem is to get a radioisotope reactor. It works on an isotope – a nuclear fuel that is more stable and decays gradually. They are not produced in Ukraine. We want to install the same reactor as on Curiosity.

“Secondly, it is problematic to calculate high-altitude aerodynamics, that is, to foresee how the drone will function on Mars. This can also be practically tested on Earth by lifting our drone to the altitude of 35,000 meters. The atmosphere there more or less corresponds to that of Mars.

“Thirdly, we’ll have to work hard on developing a navigational system because there is no GPS satellite navigation and magnetic field on Mars. But there is radiation which may seriously impair onboard electronics. So it is still a question how to make an absolutely simple and trouble-free plane.

“All the rest is available in Ukraine.

“As for the budget, no comments so far. There must be a separate project to estimate this all.

“We are planning now to make one prototype for the ground tests of electronics and aerodynamics and another for tests at the altitude of 30,000-35,000 meters.”

How long may it take for this to materialize?

“It is very difficult to assess. If we use something other than carbon dioxide, for example, helium, and provided we are duly funded and have all the resources, it will take us about a year or two to build a prototype of the ‘hopper.’ Naturally, we can make one even in three months, but it will break up once it is in the air. Then it is all worthless.”

Your victory has shown to the entire world that Ukrainians know how to adequately respond to the coming challenges. What else can Ukraine offer the world in the field of space-related and other technologies?

“Ukraine manufactures finished components that can be used in space exploration. We have Ukrainian-designed rockets. Of course, the situation is more difficult now, for our rocket-building complex used to be mostly oriented to Russia. The current situation forces us to seek other markets, reorient a little, and offer new products. But we do have young and hot heads, which is very good.

“Unfortunately, we do not know about all of them. The situation is that our project required wide coverage because we could count on victory in this case only. But, in another nomination of the same hackathon, the Kirovohrad project was among the top five, even though the assessment was made by NASA engineers.

“Therefore, the main thing is to work in the right direction, and we have already begun to do so.”