Are we independent 25 years after the referendum?

Leonid KRAVCHUK: “If there had been successful state-building processes, the Kremlin would have far fewer chances to implement its aggressive plans”

The Soviet Union broke up due to a number of factors, such as low oil prices, “perestroika” experiments, and mentality of the old communist retrograde. The August 1991 abortive putsch, the plotters’ trembling hands, blood on Sadovoye Ring, and tanks without ammunition in Moscow were the last farewell sighs of the USSR.

Not all remember now that as far back as June 12, 1990, the Russian Soviet Federative Socialist Republic (RSFSR) adopted a declaration on the “supremacy of RSFSR’s constitution and laws over legislative acts of the USSR.” By this act, Moscow in fact launched the so-called “parade of sovereignties” (Ukraine did so on July 16, 1990) which logically resulted in the final collapse of the Soviet Union and, particularly, in the December 1, 1991, referendum in which 90.32 percent of Ukrainians voted for this country’s independence. Incidentally, even the Donbas, now customarily associated with separatist movements, cast over 80 percent of votes for breaking away from the “big brother.” 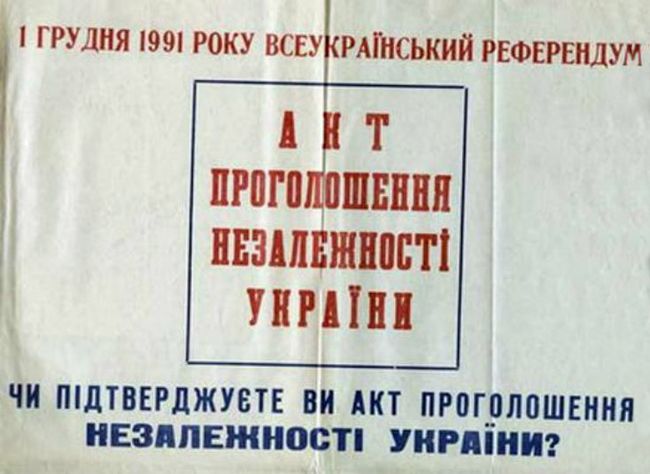 ACT OF DECLARATION OF INDEPENDENCE OF UKRAINE. Photo from the website ISTPRAVDA.COM.UA

That was a very short period when the Russian tricolor and the Ukrainian blue-and-yellow flag did not contradict each other on the wave of naive hopes for irreversible changes (they even flew together at Moscow rallies). But the fatal mistake was that the essence of Russia-Ukraine relations should not have been viewed from the angle of “time of troubles” which had always occurred in Muscovy after a temporary fold-up of dictatorship.

The Ukrainians, who had sought independence for centuries, should have focused on state-building at that final stretch of the struggle. But it turned out that the centuries of occupation, language bans, serfdom, manmade famines, and collectivization slowed down the national self-preservation reaction. After 1991, the Ukrainians saw a squabble among the patriotic forces which began eventually to split into small projects and paved the way to power for the old communist nomenklatura. Against the backdrop of raging banditry, the impoverished people passively accepted the coming to power of “Red managers” who, with Leonid Kuchma at the head, established in practice the domination of clan-based oligarchy. 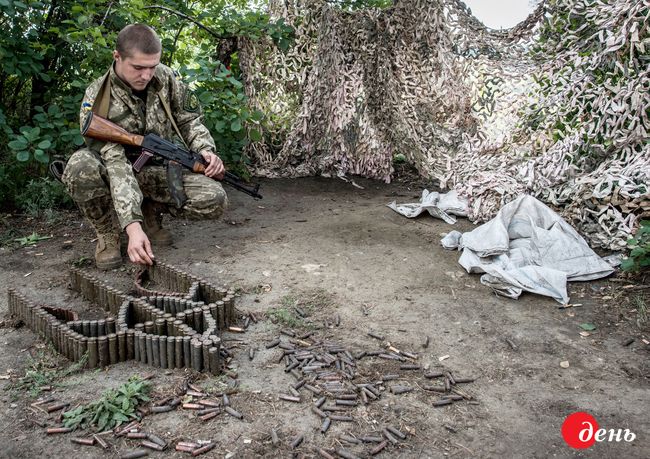 A PUZZLE / Photo by Yevhen MALOLIETKA

Certain forces and media still refer to the latter act as “state-building.” This misplaced idea often hinders coming to an in-depth conclusion – why we, the people who firmly said “Yes” to independence 25 years ago, found ourselves at a certain moment in a plundered country instead of a strong state, into which an evil neighbor, stupefied with an imperial poison, intruded. As a result, Ukraine proved to be unprepared for the Kremlin’s aggression. Yet a new generation of patriotic, albeit romantic, Ukrainians – not politicians and oligarchs (although there are some exceptions) – began to defend the state at the cost of their lives.

“WE COULD NOT IMAGINE IN 1991 THAT RUSSIA WOULD BECOME A SOURCE OF MILITARY DANGER, BUT THIS KIND OF THOUGHTS EMERGED AS SOON AS 1992”

“The referendum showed the people’s will, strength, and desire to form an independent state. We often forget that Ukraine, as part of the USSR, was formally entitled to self-determination, including cessation. But there was not a single mechanism and possibility to implement this plan. There was only one way out. For Ukraine to withdraw from the USSR painlessly and without human losses, the Soviet Union was to be dissolved or, to use a spoken phase, to be broken up. This means that the founders of the Union – Ukraine, Russia, and Belarus (the Transcaucasian Federation no longer existed at the time) – were to repeal the 1922 treaty.

“There are a lot of speculations and myths that Russia allegedly helped Ukraine to become independent. Nobody helped anybody. Thanks to the position of Russia, which coincided with that of Ukraine, on dissolving the USSR as a bloody empire built on unnatural foundations, conditions were created for the republics to withdraw from the USSR without a conflict. The December 1, 1991 referendum should be associated with the Belavezha Accords which put an end to the Soviet Union.”