The 47th World Economic Forum (WEF) has started in the Swiss mountain town of Davos. This year, its central theme is “Responsive and Responsible Leadership.” Western experts and journalists have already described the theme as a hint at the growing gap between the political elite and public as well as the loss of confidence in institutions.

Populists and anti-globalists are the main enemies of the future, believes the founder of the Davos forum, German businessman Professor Klaus Schwab.

During the pre-meeting press briefing, Schwab effectively admitted that his discussion platform led humanity astray for 20 years: he read a text written over 20 years ago in which he warned of the threat of populism and noted that globalization should benefit the majority, not just a narrow elite.

These challenges remain relevant to this day, said Schwab. “Every simplified approach to deal with the global complex agenda is condemned to fail. We cannot just have populist solutions,” stressed the head of the WEF.

According to Schwab, the goal of this year’s meeting in Davos, which will last three days, from January 17 through 20, is precisely to produce the prescriptions which will counter populism. After all, the Swiss ski resort annually brings together people with a variety of experiences, attitudes, social and financial statuses, but they are, according to Schwab, primarily representatives of the international elite, a sort of global establishment. And it was they who used the platform to convince the world that the growing pace of globalization, increasing volumes of cross-border trade and the removal of local barriers to international investors would only benefit the planet’s entire population. However, recent events, specifically those of the past year, have shown the opposite to be the case. And it was citizens of the Western world who became the first to display dissatisfaction with the consequences of globalization. Examples of this include the UK Brexit referendum and the results of the presidential race in the US, won by a candidate who promised to bring factory jobs back to America.

The Davos Forum’s participants – and there will be over 3,000 of them this year – have, according to Schwab, to find a way out, to offer policies which will allow humanity to preserve the global balance on the planet. The key issues to be discussed include promotion of economic growth, reform of the capitalist system to prevent further societal strife, loss of trust in governments and institutions, and the impact of digital technology on the levels of employment and people’s general well-being.

The Ukrainian issue has no special place in the program of this year’s Davos Forum. It is hoped, however, that it will be brought up in the context of global topics, which President of Ukraine Petro Poroshenko will take part in discussing.

As reported by the presidential press service, Poroshenko will deliver a speech in the course of the session “Moving to the East: Strengthening European Neighborhood Policy,” take part in the meeting of the world economic leaders “Responsive and Responsible Leadership in a Multipolar World” and in the debate “A New Treaty for Europe.”

Also during the forum, the president of Ukraine plans to hold a series of bilateral meetings with heads of states and governments, heads of international organizations as well as with presidents of leading foreign companies and international investors. One of such meetings already took place on January 17. Poroshenko met with leader of the People’s Republic of China Xi Jinping (a comment on what these talks mean for Ukraine is available below).

Besides the president, head of the National Bank of Ukraine Valeria Hontarieva will stay in Davos for three days as well. She is part of the official Ukrainian delegation. It seems that Hontarieva’s mission is to get the IMF to disburse the fourth tranche of its assistance to Ukraine. The bank’s press service has released Hontarieva’s schedule which includes meetings with representatives of the IMF and the EBRD.

The Ukrainian business community, meanwhile, will attempt to use the Davos platform to attract investors. For the first time in the WEF’s history, it will host two events at once which will publicize human and natural resource potential of Ukraine. This information came from chairman of the board of the Ukrainian Association of Venture Capital and Private Equity Andrii Kolodiuk’s interview with Hromadske TV. “We can offer the world our potential for opening development centers in Ukraine. More than 100 international companies have opened them in Ukraine. There are also Ukrainian companies operating abroad. Our task is to get people to invest in Ukraine. We will hold two events to that end, on January 16 and 19, targeting international leaders from around the world,” he said.

Meanwhile, the traditional Ukrainian lunch in Davos, organized by Ukrainian businessman Viktor Pinchuk, is likely to have a lot of empty seats for the first time in its history. Those refusing to participate in the event already include president Poroshenko, Deputy Prime Minister for European Integration Ivanna Klympush-Tsintsadze, MPs Svitlana Zalishchuk, Mustafa Nayyem, Aliona Shkrum, and Viktoria Voitsitska.

“As for Pinchuk’s lunch, my stance is clear: no one should attend it,” Batkivshchyna MP Ihor Lutsenko commented for The Day. “Moreover, people would do well by avoiding Pinchuk and any links with him whatsoever. Such links only legitimize him. I do not know who will attend it, and I, thank God, was not invited. In general, I believe that Pinchuk’s very existence in his current status testifies to a failure of our law-enforcement agencies. He acquired his current assets just as illegally as he grabbed Kryvorizhstal back in 2003. They must investigate the circumstances which allowed Pinchuk to get his hands on them, and punish the perpetrators accordingly. What we see instead is that two former heads of the State Property Fund are already comfortably dead, and I do not believe it was accidental.”

As reported by The Day, Pinchuk authored an article for The Wall Street Journal on New Year’s Eve, proposing that the government and citizens of Ukraine agree to a series of “painful compromises” to end the conflict with Russia. In particular, they would include Ukraine temporarily abandoning membership in the EU as an objective, ruling out NATO membership, and holding local elections in the occupied territories before reestablishing full control there in order to “demonstrate our commitment to peaceful reunification.” Another of the businessman’s proposals calls on Ukraine to agree to a gradual lifting of the sanctions imposed on Russia.

These proposals have caused public outrage. In protest, people called on politicians to boycott Pinchuk’s lunch. According to Ukrainian media, only two members of the Euro-Optimists parliamentary group have confirmed that they accepted Pinchuk’s invitation and will attend his lunch in Davos. They are Serhii Leshchenko and Natalia Katser-Buchkovska. At the time of going to print, The Day was unable to get them to explain why they had decided to attend despite advocating the European integration vector in Ukrainian politics, which Pinchuk proposes to abandon.

It is also interesting that the MPs’ trip is funded by the International Renaissance Foundation, which said on January 7 that while disagreeing with Pinchuk’s stance as outlined in his article for The Wall Street Journal, it would, however, continue to partner with his charitable foundation in joint projects, including the Ukrainian Lunch at the Economic Forum in Davos in January.

Maybe some will see my comparison as inappropriate, but the parallel is clearly there. By and large, the German businessman Schwab and Pinchuk have run into a common major problem at this stage: the discussion platforms they founded have reached a dead end, where the postulates they declared and claimed to profess have lost their “magic power” and crashed hard against pragmatic challenges of our time. It should be said, though, that the Davos Forum is at least still held in its namesake town, as opposed to Pinchuk’s Yalta European Strategy.

As usual, The Day will monitor the progress of discussions in Davos and inform its readers about the most interesting developments. In particular, we are looking forward to an exclusive opinion piece coming from one of the WEF’s participants and dealing with key trends likely to dominate the global economic policy for the next 10 years.

EVEN A BRIEF MEETING LIKE THAT IS VERY IMPORTANT 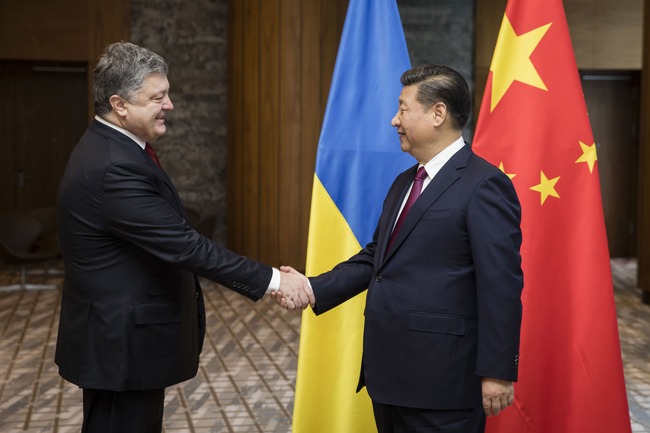 Andrii HONCHARUK, Sinologist, an expert of the National Institute for Strategic Studies:

“The meeting between President of Ukraine Petro Poroshenko and President of the PRC Xi Jinping is very important. Effectively, this meeting in Davos ends the pause that emerged in bilateral relations after the Revolution of Dignity. After all, China did not immediately understand the nature of the events that took place in Ukraine. Meanwhile, Ukrainian leaders did not immediately understand the position of their Chinese counterparts. Therefore, certain restraint on both sides was quite understandable during that pause.

“Support for Ukraine was more moral and indirect in nature. This year, this support has increased significantly. A good indication of this is provision of assistance, in particular ambulances and rescue vehicles for the Ministry of Emergency Situations, etc.

“Turning now to the Ukrainian president’s hopes that China will support peaceful settlement of the Donbas crisis and efforts to stop the Russian aggression against Ukraine and restore the territorial integrity of Ukraine, including Crimea, one may recall here that China voted against the recent resolution on human rights violations in annexed Crimea. One just has to understand that the Chinese have suffered for 30 years from the US administration’s attempts to pressure them precisely on the human rights issue. So no matter which country is involved when raising this issue, the Chinese never support it. This is not about their attitude to Ukraine, much less the Crimean Tatar people, but rather about the principled position of China to never support a resolution on human rights.

“On the other hand, the recent years have seen us ignoring the fact that China is a full party to assurances given to Ukraine in 1994 following our decision to give up nuclear weapons. Not being a signatory to the Budapest Memorandum, China declared in a statement published by Xinhua News Agency that it provided Ukraine with assurances under that document. Thus, the Middle Kingdom, too, is a party that made assurances on the protection of our sovereignty and territorial integrity. Accordingly, we are entitled to participation of China in the peaceful settlement of the Donbas crisis. President Poroshenko did very well by mentioning it, and if we really desire to return Crimea and settle the crisis in the Donbas, we will be unable to solve these issues without broad international support, limiting ourselves to the Normandy format only, and it is clear to everyone now. Therefore, we need to involve both the US and the UK as our guarantors, and China as the second largest economy in the world, nuclear power, and another guarantor of our sovereignty.”

Interviewed by Mykola SIRUK, The Day