Life “after 30 dollars a barrel”

The year 2016 started with a rapidly falling oil price. Back in late December, the forecast was at 40 to 50 dollars a barrel. Now, experts predict it going down to 30, 20 or even 10 dollars. Most pessimistic are analysts working for the British bank Standard Chartered, who forecast oil at 10 US dollars a barrel, Reuters reports. “We think prices could fall as low as 10 dollars a barrel before most of the money managers in the market conceded that matters had gone too far,” the bank’s forecast reads. Leading US banks Morgan Stanley, Goldman Sachs, Citigroup have also revised their forecasts downward. Their experts have noted that oil will fall to 30 dollars in the near future (this mark was already approached on January 12). They see the oil price dropping to 20 dollars a little later.

Meanwhile, Russia has calculated its budget based on 50-dollars-a-barrel oil. It is possible that it will be forced to revise the budget figures in the near future to reduce expenses. Which items will be revised first? Will it be welfare or military spending? Both may have an impact on the stability of the Putin regime.

In any case, the situation on the international market favors Ukraine now. A similar situation existed in the late 1980s and early 1990s, when a drop in the global oil price knocked out the seemingly indestructible Soviet Union and allowed Ukraine and other former Soviet republics to become independent. Will Ukraine benefit now as well, by becoming able to defend its independence, to return the occupied territories, and eventually join the EU and the international community as a full member? The opportunity has presented itself. 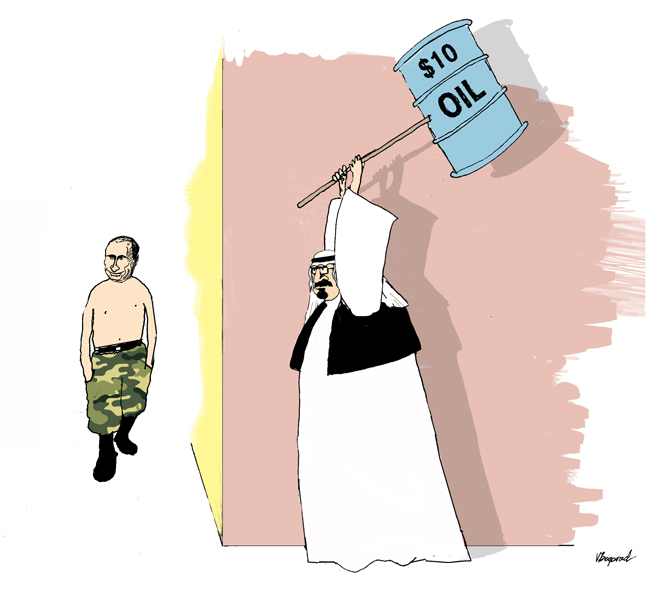 However, even the expert community avoids this conversation. Often, it looks like we are less concerned about fate and success of our country, and more about Russia’s troubles, brought about by its aggressive policy...

Oleksandr MARTYNENKO, a finance analyst with the ICU Group:

“We expect that the average price of Brent crude oil may drop by 2 to 8 percent to 49-53 US dollars a barrel in 2016. The main negative factor for the oil price is oversupply in the market created by a slowdown in global demand and the reluctance of the major exporting countries to reduce their supply volumes. The volume of oil production is declining far slower than commonly expected, and that could push the realignment of supply and demand towards the end of this year.”

Vasyl FILIPCHUK, president of the International Centre for Policy Studies:

“The level of the current oil slump on international markets has become a very nice surprise for me, as a political observer and consumer of this good. It is caused primarily by political factors. The fact that the oil price has fallen more than fourfold (from 130 to 30 dollars) cannot be explained by economic reasons. If not for the Russian aggression, if not for the West’s desire to influence Russia’s policy, this would never have happened. Today’s oil price is the political price of aggression. If the behavior of the Russian Federation will not change, such price levels (30, if not 20 dollars) can be maintained for another two to three years. It fell to 14 dollars a barrel in the 1980s. Russia’s confrontation with the US in Syria is over Russia’s interest in the destabilization, and the US’s desire to see this conflict contained. Ukraine should work hard to use the window of opportunity that is opening for it due to these circumstances.”