We are witnessing a monopoly of the Russian perspective of the history of WW II. It is especially conspicuous on the example of the Auschwitz-Birkenau Memorial and Museum
Ivan Antypenko

MATERIAL EVIDENCE AT THE FORMER AUSCHWITZ I ADMINISTRATION’S OFFICE ARE REPLICATED WITH PRECISION. THE MUSEUM’S STRIKING, EERIE ATMOSPHERE IS HARD TO EXPRESS IN WORDS

A couple of days ago I visited one of the biggest Nazi concentration camps, Auschwitz near the Polish town of Oswiecim. The place strikes with its well-thought-out cruelty and a clockwork of mass torture and murder. Striking is also the scale of this horror. It is hard to express the atmosphere with words. They all seem too irrelevant or too bombastic. However, one thing is doubtless: this place is a must-see for everyone, regardless of social and professional background, interests, and so on.

Numbers of victims in all the Auschwitz camps (I, II, and III) vary from source to source. The most frequently cited figures are one to two million deaths, most of the victims being Jewish.

Today’s Oswiecim is just an ordinary little town. There is nothing special about it except for the “death factory,” whose remains attract hundreds of thousands of tourists from all corners of the world every year. A walk from the railroad station to the former camp administration office (Auschwitz I) will take some 15-20 minutes. Even if you do not know the way, it is easy to see where the memorial museum is. Nearly all passengers of the electrical train from Krakow, which brought us to Oswiecim, moved in one direction. Buses full of tourists pass by. 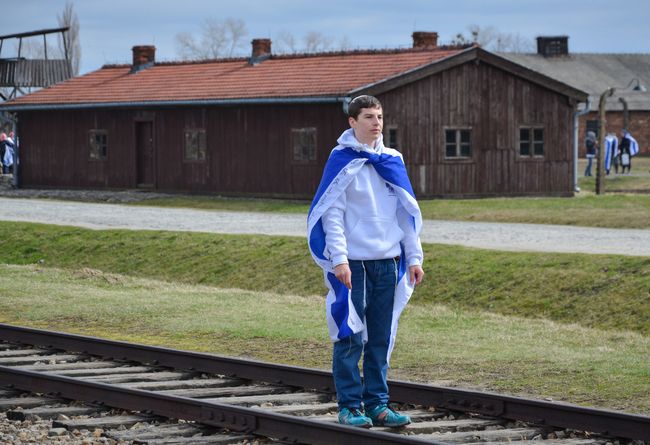 DURING MY VISIT TO AUSCHWITZ II (BIRKENAU) I MET A GROUP OF VISITORS FROM ISRAEL. WALKING AMONG THE BARRACKS, THEY QUIETLY SANG THEIR NATIONAL ANTHEM

Everyone stops at the main entrance to Auschwitz I. Arbeit macht frei, read the cast iron letters on the arch above the gate. It means “Work sets [you] free” in German. Memories flash back: you have seen this slogan more than once. Maybe in films, maybe in historical articles on WW II. 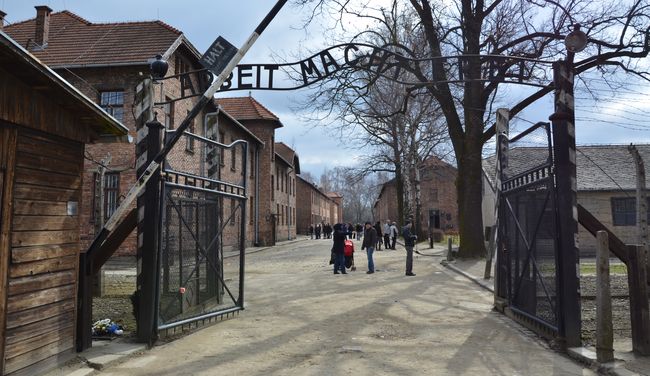 A feeling of odd discomfort and dead air grows as you walk the streets among the rows of barracks. The red brick blocks bring back memories of more scenes from war movies. It looks like they were in use just weeks ago, so well restored and preserved all material evidence is: the electric fences with barbed wire, which were under high voltage, guard towers, a gallows, the courtyard, the gas chambers, the crematorium…

THE RUSSIAN PERSPECTIVE ON THE UKRAINIAN HISTORY OF AUSCHWITZ

A lot of barracks in Auschwitz I are now national remembrance museums. Countries whose nationals were imprisoned here took care that the world learn the story of Nazi crimes against their fellow citizens. There are separate museums depicting the extermination of Jews, a Polish, Roma, Dutch, Slovak, Hungarian, and Russian museums. I thought immediately that there should be a Ukrainian museum there as well, but that was not the case. And when I walked into the “Russian” barracks, I understood why. 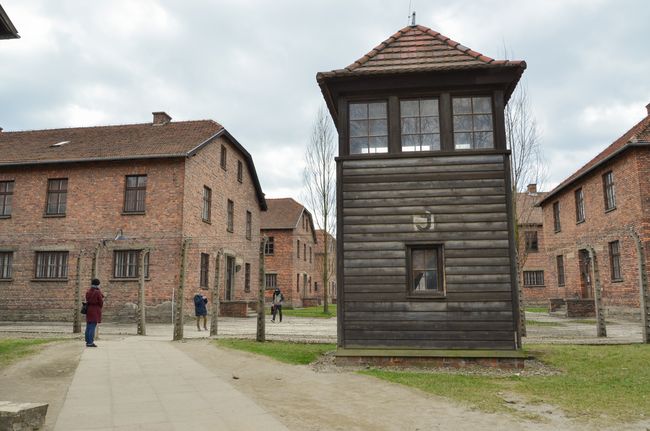 Unlike the Jewish exposition, permeated with the spirit of humanity and remembrance, Russian museum is presented in the traditional Soviet heroic style, thanks to the efforts of Russian historians, FSB archives staff and museum curators. The chronicle of warfare, the Red Army’s sophisticated offensives and the Soviet military command’s strategies simple life stories remain inconspicuous.

What immediately caught my attention was the names of Ukrainian cities and towns and the sources cited by Russian historians. They have a direct relation to Ukraine, yet their choice (for a Russian pavilion) was at least cynical and extremely biased. 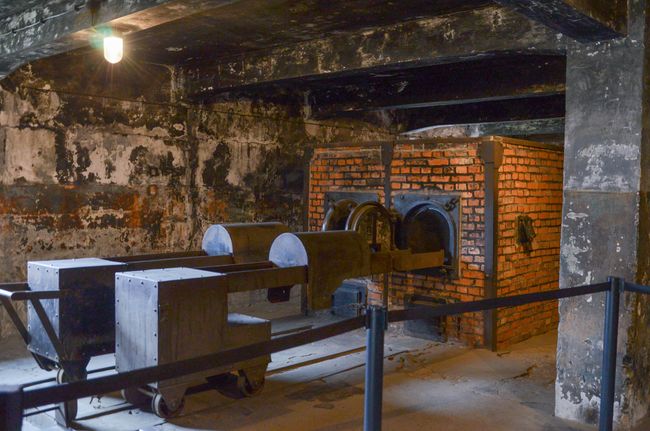 THE GAS CHAMBER AND CREMATORIUM WERE THE FINAL DESTINATION AT THE “DEATH FACTORY.” IT IS ASSUMED THAT ALMOST 70,000 PRISONERS WERE BURNED HERE BY THE NAZIS

Some five years ago I might have overlooked it. But today it strikes me how deeply and broadly Russia has been presenting its imperial perspective on history in Europe. On Ukrainian history. You see one such stand, and you immediately get an association chain: the Ukrainian language = occupation and Nazi regime. From where it goes seamlessly over to the well-tried Russian discourse of contemporary Ukrainian fascists, nationalists, and castigators.

WE HAVE A STORY TO TELL

After the visit to the concentration camp, still under impression, I read about Ukrainian inmates in Auschwitz. It turns out that Ukraine has quite a story to tell in its memorial pavilion, should one ever be opened. In Vitalii Chervonenko’s article for the BBC “Ukrainian Victims and Liberators of Auschwitz” he writes that some 110,000 Auschwitz prisoners were from Ukraine. “The 110,000 Ukrainian prisoners of Auschwitz include, according to the data provided by the Institute of National Remembrance, 95,000 Transcarpathian Jews, who were brought there towards the end of the war. The others are the Red Army POWs, members of the nationalist underground OUN, and the young men and women who were forced to work in Germany,” writes Chervonenko. 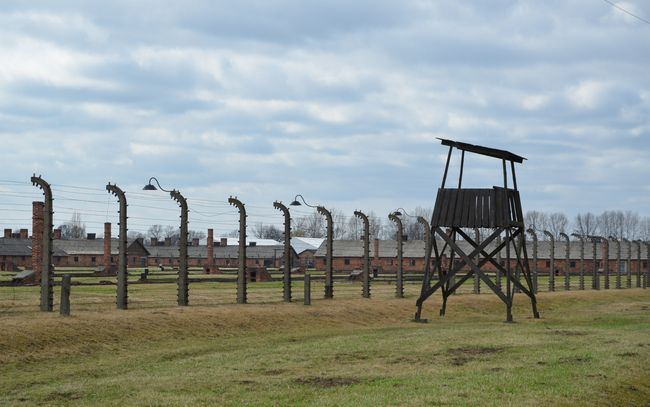 Moreover, the liberation of Auschwitz by Ukrainians is a historically proven fact. It was the men of the 100th Lviv Division who opened the gate of the main camp, soldiers from the battalion led by Poltava Jew Anatolii Shapiro. The 100th and the 322nd divisions, which liberated Auschwitz, belonged to the First Ukrainian Front. 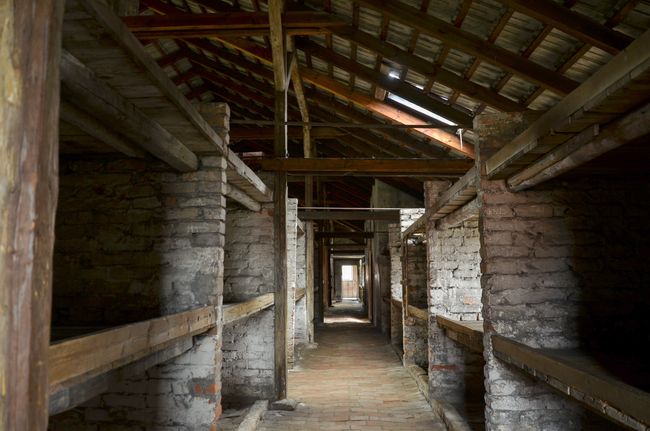 “According to historians, some 40 percent of the personnel of the First Ukrainian Front were made up by Ukrainians, for these units were manned by soldiers who were mobilized in Ukraine,” said Volodymyr Viatrovych, director of the Ukrainian Institute of National Remembrance, in his interview to the BBC. 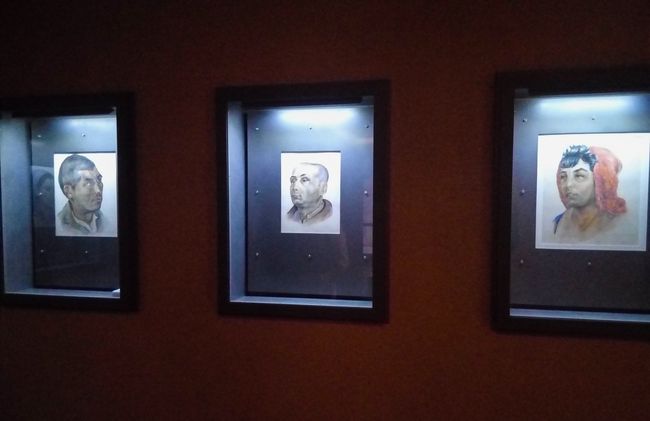 Of course, Europe was liberated from the Wehrmacht troops and their allies by the then united Red Army, which comprised representatives of many various nationalities. Yet today we are witnessing a monopoly of the Russian perspective of the World War Two. It is especially conspicuous on the example of the Auschwitz-Birkenau Memorial and Museum. 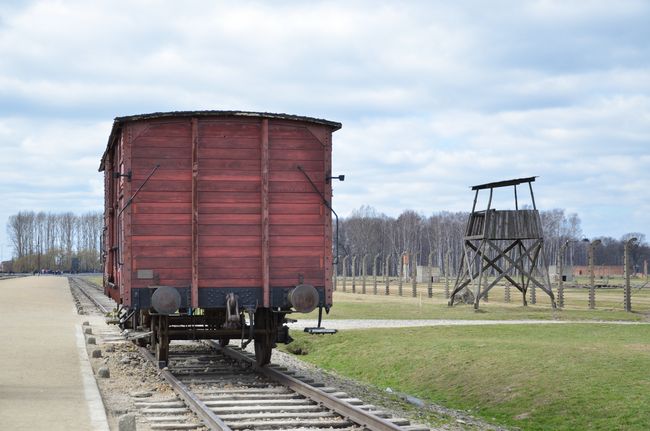 Far be it from me to emphasize Ukrainians’ special role in the history of this extermination camp or in the war as a whole. Probably this should never be done, or should be left to historians to sort out. However, there are facts which one cannot but generalize if we assume that Europe is aware of Ukraine’s history. I am convinced that Ukraine must present its historical materials and its perspective of Ukrainian resistance at such a globally known place as extermination camp Auschwitz. So far, Russia has been doing this for us.

Given the hybrid war with Russia, can we allow Russian museum experts, archivists, and FSB officers, who created this exhibit, to speak for us?

WHERE WE COULD START

The creation of a separate remembrance museum of Ukrainian resistance at Auschwitz is a long-lasting project which, I am convinced, Russia will attempt to frustrate (talking of one country, the USSR, and one army). Yet we could start with small things. For instance, by presenting some literature in Ukrainian at the bookstore situated on the premises of the museum. Such books have never been seen there, while there are numerous visitors from Ukraine. This does not require any diplomatic effort or summits. I am sure that a written request from the Ministry of Culture to the museum administration to accept a gift of several historical books in Ukrainian, original or translated, would suffice. 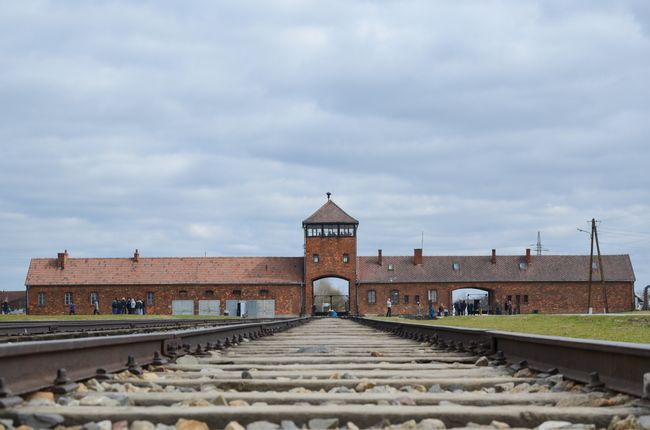 The first author that springs to mind in this respect is Lidia Ostalowska and her Watercolors. The Ukrainian translation was done by a renowned contemporary author Andrii Liubka. Watercolors is an unbelievable story of a Czech Jewess Dina Gottliebova, who portrayed the Romas, who were subject to genetic experiments by German doctors. This book also tells the story of the genocide of Romas, a familiar yet not sufficiently researched theme. The archives of the Auschwitz museum preserve pictures by Gottliebova, some of which are now on exposition.

Another example is a book by Polish author Tadeusz Borowski Here in Our Auschwitz… The Ukrainian translation (by Oleksandr Boichenko) appeared in 2014. The book contains unique reminiscences of an inmate, the author’s personal experiences.