The exhibition features works from the series “Benelux” and “Around Europe.” The artist was among the leading masters of Ukrainian easel and book graphic in the 1960s-1970s. The works of Heorhii Malakov (1928-79) reflect a bright individuality, high-level craftsmanship, and breadth of creative imagination. The artist worked in different genres and techniques, but was most successful in linocutting, according to uartlib.org. Admirers of the master’s legacy have always been attracted by his works’ high cognitive value, brought about by a large number of very accurate representations of everyday life accessories, military equipment, flora and fauna. Surprisingly observant, the artist seems to be inviting the viewer to have a closer look at the setting, because these things carry some information about the depicted historical period or specific event.

Malakov’s workshop resembled a museum, holding helmets, bayonets, shells, mines, cartridges, frontline lighters, buttons, coins, cigarette and match labels, details of aircraft, tanks, motor vehicles, etc. A separate area held models of aircraft and tanks, and next to it, old cups with tin caps and Gothic lettering, followed by a ship stern wheel, a top lantern, a compass, and a chair which was skillfully made from a fragment of a wooden airplane propeller. Also, the artist owned many books, including those dealing with art, history, military and naval affairs as well as reference books, dictionaries, and sets of systematized cutouts from magazines. Love of the material world and animals permeates all the works of Malakov just as much as his invariable smile and kindness. 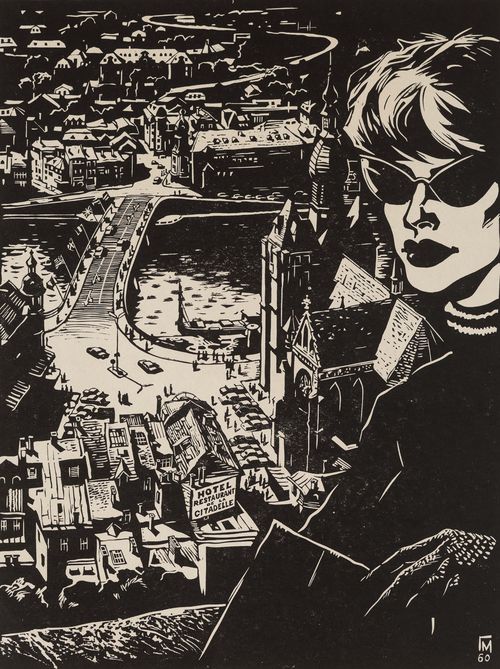 PARISIAN SKETCHES FROM THE SERIES “AROUND EUROPE” (1961). PAPER, LINOCUT (COLLECTION OF THE NAMU)

“In November 1959, after an exciting trip to the Benelux countries, the impressions of which Malakov, being the sociable man he was, freely shared at every step, the Union of Artists sent him on a mission to the political department of the Red Banner Black Sea Fleet (it is only now that we may joke about the combination of colors in this name: red and black! Like in the Ukrainian Insurgent Army!) While staying in the still closed city of Sevastopol, Malakov was able to inspect and, due to holding an appropriate ID, picture the ruins of Chersonesus, auxiliary ships, and some warships in the bays, and do as much artistic work as he wanted on board Frunze, an artillery cruiser. On his return, the artist created a series of colored linocuts ‘Black Sea Sailors,’ which immediately gained high recognition, and was even published in Moscow as a set of postcards. But at the same time, he worked on the series ‘Benelux,’ which also would become a success,” recounted about his creative father the artist’s son Dmytro Malakov.

To mark the 90th anniversary of the master, the museum will hold an exhibition based on two series of graphic works, “Benelux” (1960-61) and “Around Europe” (1961-62). They were inspired by the artist’s 1959 tour to the countries of Benelux (Belgium, the Netherlands, Luxembourg) and 1961 cruise around Europe, when Malakov visited Oslo, London, Paris, Rome, Naples, Pompeii, Athens, and Istanbul. The works use the then-popular linocut technique, that is, linoleum woodcut. Along with 12 sheets from the museum collection, a linocut and a watercolor composition from the Malakov family collection will also be exhibited.

Using the “Benelux” and “Around Europe” series, we can trace the first steps of the young artist in mastering the linocut technique. Also, we can see the transformation of the emotional experience of a person who finds himself in an unusual environment, that is, abroad, in the free world. (The notion of the “free world” emerged during the Cold War to describe the democratic countries, which held the right of the individual to free choice of lifestyle as an important value.) For a tourist from the USSR, the things they saw came as a real cultural shock, and for an artist, they represented a wealth of material that needed creative comprehension.

According to the organizers of the exhibition, these works reflect the artist’s sincere passion for graphic design used in advertising by world brands, fashionable clothes, hairstyles, characteristic human types, and everyday scenes, all of them common in the stormy 1960s. Malakov’s linocuts reinterpreted what he saw, as the master selected the most striking stories, stylized them, resorted to contrasting comparisons and treated with friendly irony pictures of the world which the Soviet propaganda stubbornly called the “rotting West.”

The exhibition will last until May 20.

By Alisa ANTONENKO. Illustrations courtesy of the PR department of the NAMU
Issue:
№25, (2018)
Rubric:
Society