One has to be careful at this exhibition. It is possible that a witch from an engraving would enchant you, and then even haunt you in your memories or in sleep. She is catalogued in the 1980s series of “People of Dzembronia Village,” but is placed aside of other works. The image of woman that represents fertility is sensual and surreal at the same time. The exhibition displays a sketch of two versions of the painting. According to Pavlo Hudimov, founder and curator of Ya Gallery, the later version is the one with more abstract landscape and objects around the character. “Serhii, son of Heorhii Yakutovych, told me that his father had wanted to be more abstract,” explains Hudimov. “The artist simplifies gestures. He introduces elements that would allow better immersion for the viewer. Yakutovych appeals to the viewers’ imagination.”

The exhibition “Heorhii Yakutovych and the Carpathians” presents the artist’s works from the 1960s to 1980s related to Hutsul topics. One room displays art related to Shadows of Forgotten Ancestors, the other contains the abovementioned “People of Dzembronia Village” series. Many works come from Yakutovych’s collection, some are from state-owned collections, such as one of Khmelnytsky Regional Art Museum. Many prints are presented in several different versions, some – with sketches. The sketches are not always detailed, but they still present the characters well. 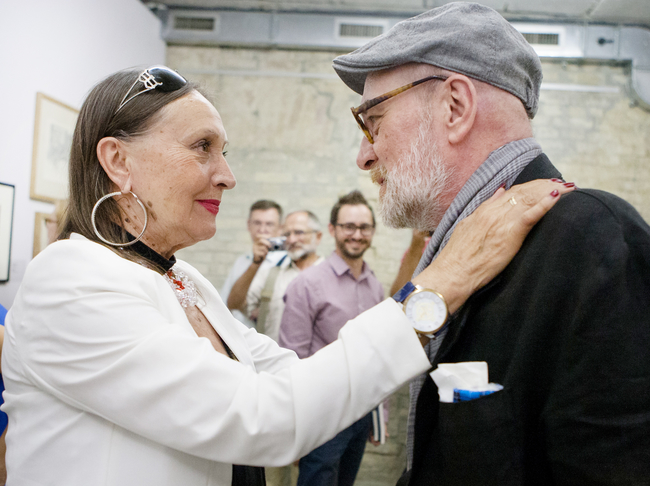 THE EXHIBIT’S OPENING AT “YA GALLERY” SAW LARYSA KADOCHNIKOVA WHO PLAYED THE ROLE OF MARICHKA IN SERGEI PARAJANOV’S SHADOWS OF FORGOTTEN ANCESTORS. SHE IS PICTURED NEXT TO SERHII YAKUTOVYCH WHO FOLLOWED IN HIS FATHER’S FOOTSEPS AS ARTIST

The works of famous artist immerse the viewers deeper into the Carpathians, they lure with Hutsul stories and their lives, which resemble some kind of a rite. It is not about rituals in the literal sense of the word – even everyday things often take on special meaning. Take, for example, Family Portrait in the Carpathians. The plot is unusual for the genre – the characters eat. They have pieces of bread close to their mouths, they are focused on the process – some are even squinting. “This is the most awkward moment when a person eats. Heorhii noticed this gesture of nibbling well. Villagers are eating differently from the city dwellers. For them it is like a ritual,” says Hudimov. 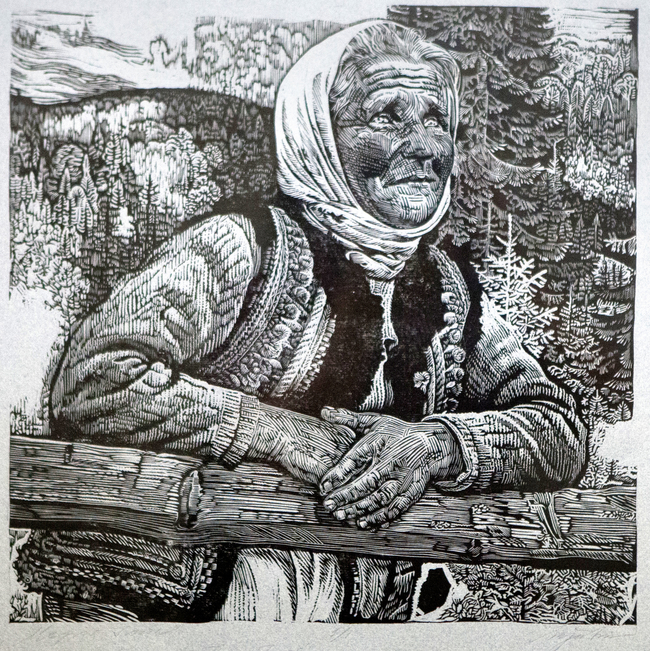 The engraving entitled “In the Forest” presents a female villager among dense trees. Her face, her knitted jacket is actually drawn in the same stroke as the forest around her. Only the flower-adorned scarf distinguishes the outline of her face and subjects everything to the same rhythm.

The other hall of Ya Gallery presents Heorhii Yakutovych’s art for Shadows of Forgotten Ancestors back in the 1960s. The artist had illustrated this story by Kotsiubynsky and participated in Parajanov’s legendary film. The works are closely related to one another: one version of an engraving entitled “By the Fire. Ivanko and Chuhaister” has the mythical forest creature resembling Parajanov. And the outline of “The Last Meeting” reveals the profile of Yakutovych himself. Moreover, as Pavlo Hudimov says, the sketches show that this resemblance was not planned for in advance. Smooth in the first sketches, the outline becomes sharper to hint the artist’s beard and hair. 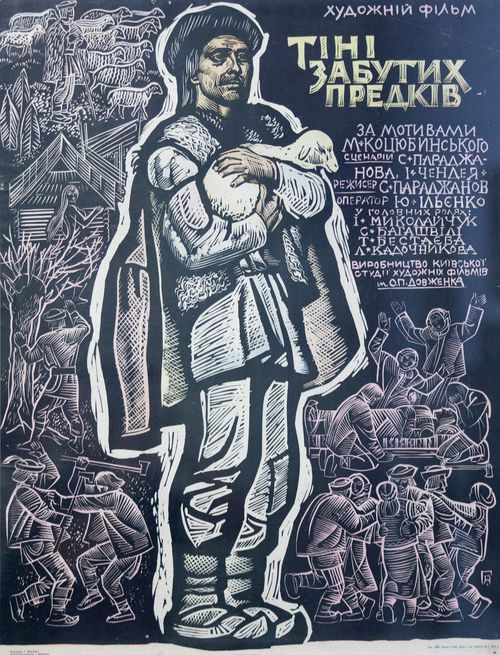 A POSTER OF THE FILM SHADOWS OF FORGOTTEN ANCESTORS. HEORHII YAKUTOVYCH WAS NOT ONLY THE PICTURE’S PRODUCTION DESIGNER BUT ALSO THE FILM CREW’S GUIDE OF SORTS IN THE CARPATHIANS BECAUSE HE KNEW HUTSUL CULTURE

The contemplation on how an image changes from a sketch to the final version is enchanting. One begins to look for differences, to think why the artist got rid of some details and added some more – and, ultimately, the viewer himself dissolves in the Carpathian Forest, just as the woman in the Dzembronia forest on the engraving.

The art center staff speaks of a paradox: Yakutovych’s cultural significance contrasts with lack of proper studies about his art. The “Shadows of Forgotten Ancestors. Exhibition” project, which was presented in Kyiv in the spring and in Lviv in the summer, prompted the Ya Gallery member to investigate the artist’s work more closely. The exhibition organizers say that a single comprehensive overview of the artist’s works would be the next step in creating a modern view of Heorhii Yakutovych’s legacy and of a more general study of Ukrainian Graphics in the 1960s-1980s. Polina Limina from Ya Gallery refers to the exhibition as to “Understanding Yakutovych 101.” 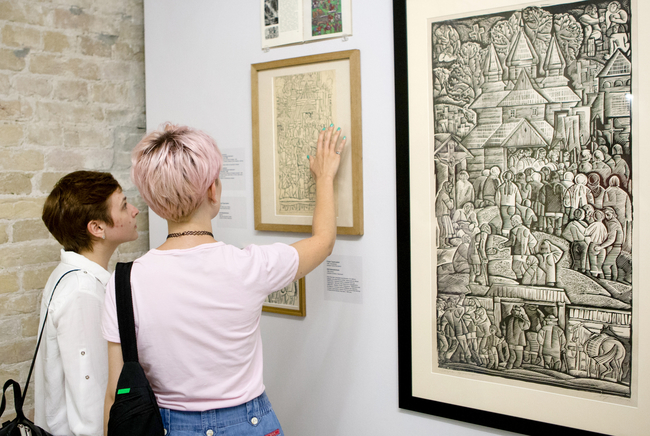 ON THIS ENGRAVING TITLED “THE OLD HUTSUL REGION,” A LITTLE CARPATHIAN VILLAGE GROWS TO BE A SEPARATE UNIVERSE. THE SKETCHES NEXT TO THE PICTURE SHOW HOW WORK VARIED IN THE COURSE OF A CREATIVE PROCESS / Photo by Mykola TYMCHENKO, The Day

The Carpathians now is a fashionable holiday destination. Yakutovych’s travels are no less interesting and modern. So, take your courage and dive into the bizarre world of Ukrainian highlanders at the exhibition, which will be open at Ya Gallery, Kyiv, through September 12.