“I do not mind becoming an advisor to prime minister”

Anton Holovachenko is inspirer and co-founder of UniExo. This is a robotized module exoskeleton for muscle rehabilitation after fractures, cardiovascular diseases, or surgeries. It could also be used by disabled individuals.

UniExo has two advantages over the existing models. First, it is a module and not stationary construction, so its individual parts could be separately used for rehabilitation. Second, all the constituent parts of the exoskeleton will cost from 30 to 40 thousand dollars, which is two times cheaper than the contemporary stationary equipment. It was possible to reduce the system’s cost thanks to 3D printing of the component parts: UniExo does not use carbon fiber and titanium which are conventional materials in other well-known exoskeleton models. The components of UniExo are made of medical plastic.

At present Holovachenko, 22, is an undergraduate at the National Aviation University. He makes no secret of his ambitions and dreams of using robotization to enhance human lifespan.

He has several developed projects on his record. But this one gained most popularity, as well as numerous prizes including the European Youth Award. Holovachenko’s became the first Ukrainian project awarded over the five years of the competition’s existence. UniExo took part in the global 2015 JCI World Congress in Japan and was recognized as one of Ukraine’s top startups both at the Ukrainian startup competition and at TechConnect in Kazakhstan.

It all started 2.5 years ago, when Holovachenko’s grandmother suffered paralysis in one arm. Rehabilitation was very expensive and included a trip abroad. It was when the young man saw a self-assembly exoskeleton in Iron Man 3 and decided to design similar gear. Thus the startup named UniExo came into being in July 2015.

The research project was at first sponsored by Holovachenko’s university, later the startup began to develop independently. Holovachenko’s mother Tetiana, who has expertise in medicine and software development, helped him with the design. Now she is a co-founder of UniExo.

Recently UniExo won another award, Robot Launch. Due to a voting open to all, the Ukrainian design gained 91 percent of all votes and ended up in the list of Top 15 projects. Even Ukraine’s Prime Minister Volodymyr Hroisman supported the project during voting. And a week later he met with the young designer. 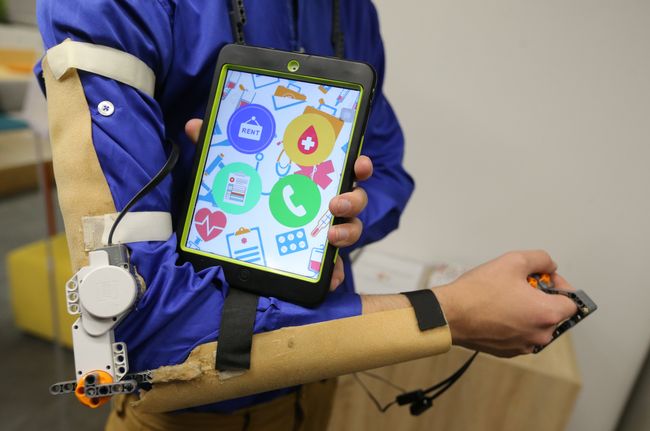 Recently Holovachenko returned from Israel, where he had presented UniExo at the Ukrainian-Israeli business forum.

“At the forum I was more of a speaker than reporter. Nevertheless, I presented UniExo, and quite a lot of people got interested in it, as they were curious about the closest competitor of the well-known Israeli-made exoskeleton ReWalk. Also I met with surgeons, rehabilitation therapists, and experts who work with exoskeletons. We are still waiting for a lot of feedback, but some experts told us right away that it is a great design because it proposes certain technological solutions.

“Besides, we met with several foundations and investors.

“Unfortunately, I was not able to meet with the producers of ReWalk. I would love to see their technology in action.”

Could you tell about Robot Launch? What does winning this contest mean for your project?

“There used to be no Ukrainian projects in Robot Launch, and we are one of the first who reached such a level, which is why it earns us popularity. That’s first.

“Second, the organizers suggested we do an acceleration program. They do not fund the building of a prototype, but they do provide legal and resource support. Now the question for us is to decide when we should take part in the events suggested by the organizers: early or late in 2017.

“Our schedule is full one year ahead, and it is crucial for us to understand what is better for our development: to get into the accelerator, work with the business model, and later receive investments, or start looking for funds now. I support getting financial investment first. At present we have already reach a certain stage in our development and we need financial resources more than anything else.”

What will the following stages of development be?

“Firstly, the creation of a complete industrial prototype with its design and with open tests in clinics. Secondly, we are also working to finish off the algorithms to ensure their seamless interaction.

“Thirdly, the development of neurohelmet technology, which is crucial for paraplegics and patients with paralyzed arms. Via a neuro-control helmet they will be able to control their motions better than via robotization technologies.

“We are also going to finish off our mobile app. At present we have a beta version. The app allows to control the exoskeleton, monitor rehabilitation progress, and establish interaction with the physician. The app will also allow leasing an exoskeleton from the patient’s home.

“Besides, there are other startups with whom we would like to work jointly, and not only on rehabilitation exoskeletons, but also on the vascular system.”

Recently you met with Prime Minister Volodymyr Hroisman. What did he say to you?

“It all began during the TOYP competition, when we got support from Illia Kenigshtein who encouraged people to vote for our project. Volodymyr Hroisman supported our project during the last days. And he wrote that we should meet. We postponed the meeting a bit due to my trip to Austria. We were contacted by his assistant.

“First, Mr. Hroisman was interested in the mechanism of my design, because he had already tested a robotized Jeep. He liked such robotization. He was curious about the principle of locomotion. Basically he has an idea of these mechanisms and how they work. I told him about the idea of a Ukrainian selection stage for European Youth Award. He inquired about our app.

“One of his most important questions was how to keep projects at home and help them develop. I told about the know-how in Israel, the UAE, the US, and Canada. All of them created a certain grant fund for sponsoring startups.

“Mr. Hroisman suggested I prepare the portfolio of documents and the road map for such a fund. At first, I need to collect certain information. Unfortunately, I cannot dedicate all my time to this, but I realize that creating a grant-based startup sponsorship fund on interest basis would be vital for many projects which are now being developed in Ukraine. A serious selection is necessary, and it will hardly be projects at concept stage.

“I certainly do not mind becoming an advisor on innovation and startups to the prime minister. I am an ambitious person, and if an issue requires certain time, I can do it. I know my competence and that is why I see prospects for further cooperation.”

When did you arrange the next meeting?

“We have not chosen a term. I was told to submit information which I consider to be important. But to do this, I need a couple more meetings with Mr. Hroisman and his advisors.

“During my trip to Israel I met with the Ukrainian ambassador and several government officials, who shared some information on how such a fund should work and what it should look like. Yet I concluded that we would be better off with the Canadian model, including a state-supported fund for sponsoring startups.

“In Canada a startup receives a grant, which it subsequently must either pay back or show that all the money was wisely spent by producing receipts and detailed financial statements. Such a fund is financed by the Bank of Canada. Given the current nationalization of PrivatBank, this situation could also be used to set up such a fund.

“Unlike the Canadian model, in Israel a project must pay the entire amount back when it gets a revenue or first investments. Under our conditions, projects will find it extremely difficult.

“After my return to Ukraine I contacted Mr. Hroisman’s deputy, and now I will need to complete the proposal. After I have sent it, we could discuss a meeting. Moreover, if I have to speak with certain European authorities, I will need to do it in an official status of a representative of the fund, advisor or consultant to the government. This moment is also worth discussing.”

Did you look at the possibility of state support for your project?

“We did, but so far I am not very sure about the possible format. It might be financing of a social program. Yet for the start I would like the Ministry of Healthcare to sign a memorandum on cooperation with other healthcare startups, and not only with projects on e-office. Integrating certain technology projects for their testing and clinic feasibility study would be much better than financial support. There is no need to purchase equipment, it would suffice to provide access to testing in state-run clinics. That is exactly where you find patients with many problems. In private-run clinics the quality of healthcare is much higher, thus they have fewer problems with patients.

“Various state-run companies could also help us with the development of special plastic metals for our industrial prototype.”

One of the problems innovations (medical, in particular) face is that investors do not consider this sector as profitable. You too encountered this problem at a certain point in time, when you needed to transfer your invention into business spheres. How difficult is this transition from research and development to business?

“First of all, it is all very complicated. Sweating on a project in a lab you do not particularly think about business, because you need to create a technology, write out algorithms and formulas. But when it comes to business you understand that no one is interested in all those pages you have written. You need to estimate the profit and cost. A lot of time is taken up by startup competitions and consultations with all manner of experts. But this is useful work without which you cannot build a business.

“You must also scrutinize investors’ proposals, they do not necessarily help your project develop.

“Resistance to stress also matters a lot. As time passes, the team could lose motivation for work and a lot of problems could arise.”