We met Vinnytsia Mayor Serhii Morhunov in a working atmosphere, finding a “slot” in his tight schedule full of briefings and routine meetings.

Vinnytsia is often cited as an example of new dynamism. The city is building new kindergartens, producing its own VinWay trams, updating public transport stops, and has opened an NGO hub, an IT entrepreneurial center and original museums. City residents can communicate online with the Round the Clock Watch rapid response center, use the services of the “mobile” Transparent Office and follow the electronic traffic schedule. But is it all that quiet in the “kingdom”? As Vinnytsia-born people hold key offices in the state, the city is always in the focus of attention. You can’t take your hand off the pulse even for a minute, Mr. Morhunov says, for the mayor’s job is not only to seek the solution of difficult problems, but also to provide safe and comfortable conditions for city residents.

What brought about the active and dynamic development of Vinnytsia: the previously taken pace or of the decentralization reform?

“Both things did. When our team came to power in the city, we began by improving the quality of the city council’s performance and restructuring the system of administration. When all the units began to work as one mechanism, we mapped out a comprehensive strategy of urban development, ‘Vinnytsia 2020,’ which made it possible to take a more effective approach to the existing problems. But, having a clear vision of the problems and the ways of their solution, we had no financial resources. For this reason, when Volodymyr Hroisman was transferred to the Cabinet of Ministers, he began to introduce decentralization which offered [regional bodies] certain powers and finances and made it possible to effectively develop the community, its infrastructure and social sphere, and improve investment attractiveness. 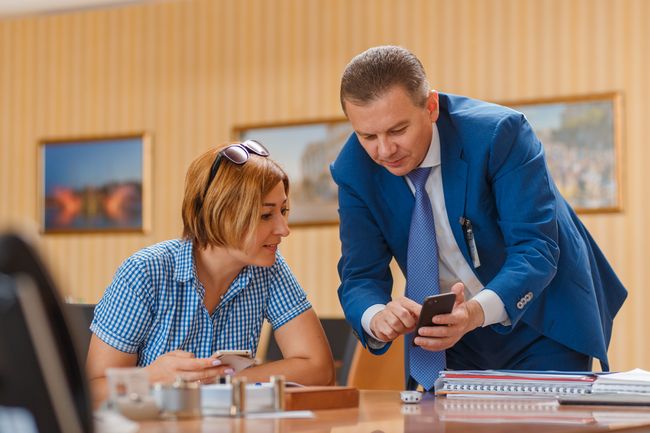 “Additional financial resources opened up new opportunities. Previously, we could not even dream of winterizing several schools in a year. We did not even dare take up large-scale projects. And today, for example, we have begun to finish the construction of a 3,000-sq-m emergency hospital. Incidentally, we’ve received serious financial support – over 70 million – from the national budget for this project. The hospital is supposed to have an intensive care unit with a shock room, a resuscitation block, and an up-to-date urgent surgery block with laparoscopic equipment. You will find such a systemic approach to the organization of medical care nowhere else in Ukraine so far.

“At the same time, we are carrying out some spatial development projects. We noticed after reconstructing Kosmonavtiv Avenue that business activity had increased on this territory. We began to open cafes, stores, and new offices. This means creation of new jobs, gentrification of the area, and, what is more, positive mood of the residents who always relax near fountains and the Atlant [sport club].”

Vinnytsia once set a goal to keep public transport going. The city’s transport reform is still called the most successful one, and Swiss-made trams run like clockwork. Does the city plan to develop the public transport network? What advantages will city residents get from introduction of the electronic ticket in 2019?

“Public transport now accounts for 80 percent of passenger carriage, so it must be of high quality and safe, and the Vinnytsia Transport Company is constantly trying to update the rolling stock. While purchasing new municipal buses, we also do heavy repairs and restorative maintenance, if necessary. And, what is more, we continue, together with our Swiss partners, to draw up a delivery schedule for a new batch of trams that are so far running down the streets of Zurich. Vinnytsia is going to receive 70 vehicles from 2021 on. So it is time to prepare the infrastructure, tracks, and overhead wires.

“At the same time, we are working on introducing the electronic ticket – it is an effective system, a worldwide practice, and a call of the time. To carry out the project, we took a loan at the European Bank for Reconstruction and Development, and all the preparatory work is drawing to a close. What advantages are Vinnytsia residents going to get? Firstly, they will find it convenient to pay fares. Secondly, the system will make it possible to effectively use public transport. Thirdly, it will be clear what resource the Vinnytsia Transport Company will gain for the service it provides. Moreover, the electronic ticket is the first step towards creating the comprehensive ‘Vinnytsia resident’s card.’”

Vinnytsia was named Ukraine’s most comfortable city for the fourth consecutive year. But still here is “a fly in the ointment”: while everything is OK, as far as the city’s infrastructure, the humanitarian sphere, and municipal services are concerned, this year’s polls show that industrial development is an obvious downside.

“Frankly speaking, it is the problem of not only Vinnytsia but of Ukraine as a whole because this country is at war. The city is tackling the problem of attracting investments. This year we finished the construction of the first stage of a UBC Group plant, and the state-run company Electric System, where there will be 2,500 jobs by the end of this year, has been working for almost two years. A memorandum has been signed about the construction of a HEAD sport gear factory. Besides, there are about 100 various industrial facilities in this city – some of them worked in the Soviet era and adapted to contemporary business conditions, and some have been founded by foreign investors in the past 10-15 years. 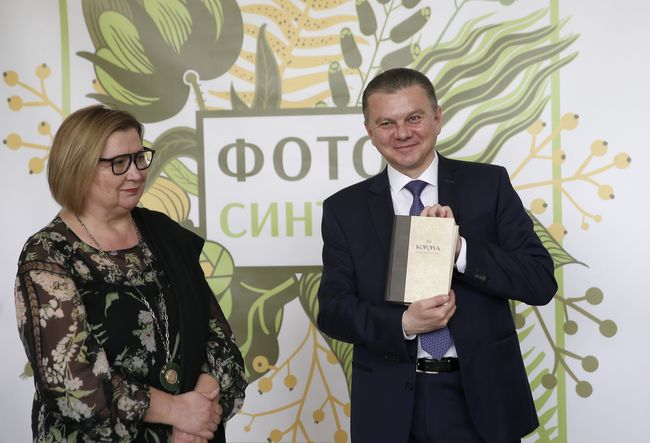 APRIL 25, 2018. THE OPENING OF DEN’S PHOTO EXHIBIT IN VINNYTSIA. THE MAYOR HOLDS THE CROWN, OR HERITAGE OF THE RUS’ KINGDOM, A NEW DEN’S LIBRARY BOOK, WHICH WAS HANDED OVER TO ALL DEPARTMENTS OF VINNYTSIA PEDAGOGICAL UNIVERSITY AND THE CITY’S 17 LIBRARIES AND BRANCHES / Photo by Ruslan KANIUKA, The Day

“But to build an enterprise is one thing and to find working hands is another. The training of adequate shop-floor workers at vocational schools is on the skids, to put it mildly. The problem we are facing today is that there’s nobody to work at factories. For this reason, the question of attracting investments – both foreign and domestic – requires a multipronged approach. It is unrealistic to solve this problem within the city limits because there are some points which only the central authorities can settle.”

The city council has been paying a lot of attention to local history lately. The Center of Vinnytsia History functions, past events are being reenacted, films are being made, and monuments are being unveiled. Is it because you are a historian by education or is the answer not so simple?

“As far as historical renaissance and filling blind spots and pages are concerned, the newspaper Den is second to none, for which kudos to its team and personally editor-in-chief Larysa Ivshyna. As for the history of Vinnytsia, its residents have in fact known nothing about their city’s past for a long time except for Pirogov and Hitler’s headquarters because Soviet ideology hushed everything up. But Vinnytsia is 655 years old! There were people in every century, who gave impetus to the development of our city. And, not to make mistakes, we must know our past. Therefore, it is very important to develop historic locations, establish museums, and restore historical justice.

“It’s time to show our strong sides and learn to position ourselves correctly so that we can win first – not second, third, or twentieth – places. For example, the Vinnytsia Museum of Transport Models ‘grew’ from the private collection of a Polytechnic lecturer. He used to collect vehicle models in all of his lifetime and can now display them to people. It is one of Ukraine’s largest and best museums today.”

Den’s Days came back to Vinnytsia this year. What are your personal impressions of the event and to what extent topical are intellectual projects of this kind? Are they popular with Vinnytsia residents?

“Incidentally, I recently came back from a city, where I saw a splendid exhibit of celebrity photo portraits right on the street. I immediately recalled the Den’s photo exhibit we received this year. Both adults and children visited it, and the press and social media were full of comments. But it would be a good idea to display this photo chronicle more widely – in squares, the river front, and parks. It is our photo history, and we should show it to all people – not only to the conscientious and the interested. What is more, this exhibit mirrors the mood of the people of different ages, occupations, and preferences. It is a ground of sorts for research and reflections.”

Vinnytsia-born people are holding key governmental offices now. As the elections are coming up and spin masters are on the alert, do you have any “safety devices” to stabilize the situation if somebody tries to rock the boat?

“Frankly speaking, there are enough provocations even now. There always are disgruntled people, both on the central and urban level, who want to destabilize the moderate climate of Vinnytsia. But we are repulsing attacks on all ‘fronts.’ Of course, we won’t be able to cover all of our backs. It’s politics! And we are aware that nationwide events, such as the anti-smuggling campaign now underway in the city on the prime minister’s initiative, are to be dealt with by our team. But it is unrealistic to build a successful Ukraine without overcoming corruption. Please pay taxes, develop the economy, create jobs, work honestly, and nobody will bother you. The task of Vinnytsia and its residents is to withstand this political struggle and further develop.”

Vinnytsia will be marking its 655th anniversary in a few weeks’ time. What do you personally think of the mood of Vinnytsia residents?

“People are tired of the hybrid war with Russia which is terrorizing Ukraine for the fifth consecutive year and slowing down economic development. They want reforms to work at once. But there’s no such thing. Any kind of development means hard work. You can take different attitudes to the leadership, but everything also depends on people’s actions. We have a colossal potential and show unfailing love for the land we live on. We must work more and speak less. If everybody works wholeheartedly at his place, the result will not be slow to arrive.”