Photo from The Day’s archives

The second president of Ukraine marked his 80th birthday on August 9. Much has been said and written about his role in Ukraine’s recent history by politicians, public figures, and media people. Whereas public opinion shows a realistic attitude, the political community apparently lacks it. Roman Bezsmertnyi wrote on Facebook: “Leonid Kuchma’s first presidency was aimed at rescuing the economy, in the first place, and the second one was meant to rescue the state.” Most responses to his post proved negative.

Volodymyr Boiko wrote: “So Kuchma is a hero? Human memory is short, indeed…” He is echoed by Anatolii Mazurenko: “As an ordinary Ukrainian, I remember Kuchma primarily as the creator of a feudal-oligarchic system in our country. He also made his son-in-law an oligarch after giving him state-owned enterprises as a present. And his ‘privatization’ of the metallurgical complex in Kryvyi Rih was a rip-off. Kuchma brought Yanukovych to power and was rewarded by Akhmetov. Medvedchuk, this enemy of the Ukrainian state, was a snake cherished in Kuchma’s bosom. There is a long list of political self-serving acts.” 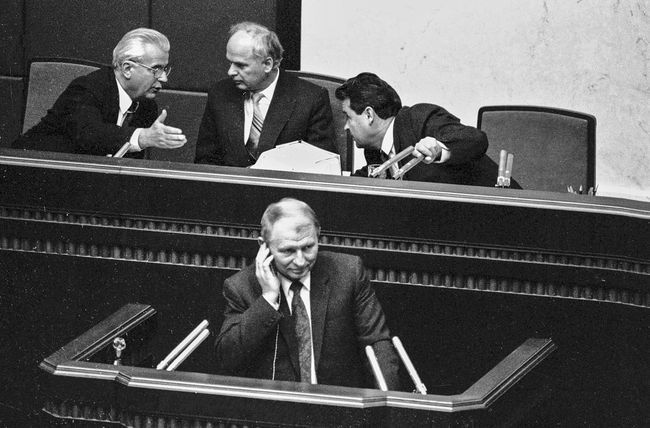 Some politicians, however, offered a different view. MP Ihor Huz wrote on Facebook: “[He was] the employer in the contract killing of journalist Georgy Gongadze. [He was the] politician during whose presidencies the main oligarchic clans took shape. He is a ‘red director’ who preserved the Soviet system in independent Ukraine. All who took part in the campaign ‘Ukraine without Kuchma’ – among them yours truly – have to admit with regret that they had at best only limited success.”

As the years passed, despite the herculean political, financial, and media efforts of the Kuchma-Pinchuk Family to whitewash the second president’s image, hiring authors to write books, filmmakers to produce documentaries, organizing projects and events like “Tomorrow.UA,” “New Leaders” or YES, there have been increasingly fewer illusions about Leonid Kuchma’s “merits.” The results of our poll, carried by Den/The Day, are quite informative. The question was “How should Ukrainians feel about the second president’s anniversary of birth?” Greetings were extended by 19 percent of respondents; 5 percent scorned it (“The man doesn’t deserve being mentioned…”); 15 percent wrote that the Kuchma regime [aka Kuchmism. – Ed.] is a lesson worth being learned and that no one should cast a ballot for a single Kuchmist; 34 percent believed he should be in jail; 14 percent wrote it’s high time the servility-to-success tradition were broken; 13 percent didn’t care one way or another.

Ukrainian society remains reflective while part of the political community – people supposedly in possession of more accurate and detailed information – continue singing praises to Leonid Kuchma. Inna Bohoslovska believes that he “built a Ukrainian state that had never existed – and which no longer exists. Kuchma marked the beginning of the post-Soviet period when he introduced new institutions…”

Why such political shortsightedness? First, because some remain in the dark. They stand a chance of correcting their eyesight by using a vast data resource pertaining to Leonid Kuchma’s career. All they have to do is dig deeper, look up sources (books, media reports, etc.) other than those made to the Family’s order. Second, because some are just pretending not to understand. This is a far worse scenario as such pretenders are playing into the hands of dark forces, de facto turning traitor to their Fatherland, telling lies to society and replacing truth with propaganda. This is unacceptable. How can such politicians run for president and conduct other activities without seeing the causal link between past actions and modern realities? 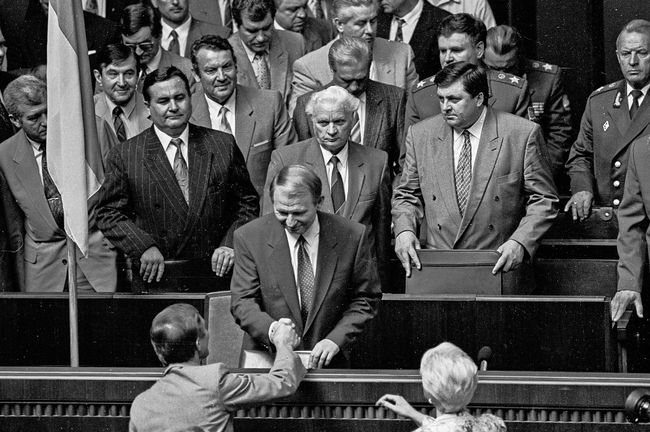 In 1994, Leonid Kuchma was elected President of Ukraine, aided by Moscow. The following is an excerpt from Den’s interview with dissident Levko Lukianenko (Aug. 26, 2011): “Kuchma was one of the ‘red directors.’ Under Kravchuk, managers of industrial enterprises, heads of kolkhozes and state farms began to gain strength, so they brought one of their own to power during the 1994 elections. Needless to say, [President] Kuchma began serving the red directors who wanted to privatize their enterprises. As a result, there began a privatization campaign that eventually turned into one best described as grabadization. All this badly damaged our economic complex. We should’ve used the economic potential left by the Soviet empire and adjust it to the new conditions instead of destroying it. As it was, we kept tearing it apart and creating nothing in its place, doing all this with Kuchma’s blessings and under his supervision. Kuchma caused a great deal of damage by introducing an unethical and illegal personnel selection system. It was under Kuchma that ministerial posts were put up for sale (something never practiced during Kravchuk’s presidency). It got so, persons of dubious character, often with CR, started receiving important executive positions. High positions were handed out based upon greed rather than merit. Over the years in office, Kuchmakcreated a system we can’t get over even now.” 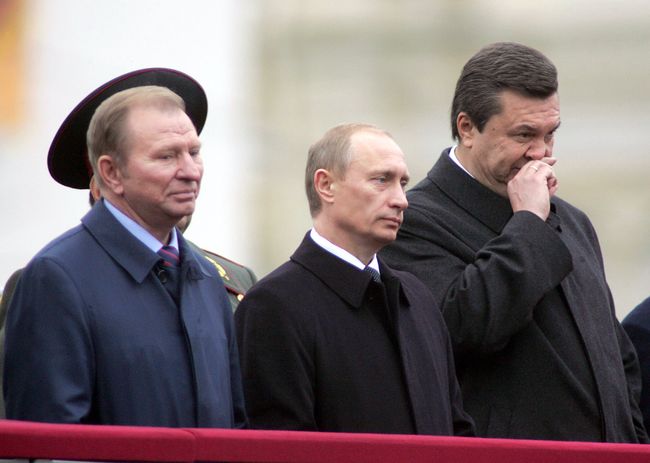 In October 2004, prior to the presidential elections, Vladimir Putin met with Leonid Kuchma, whose [second] term was drawing to a close, and asked him directly whom Russia should back in the presidential campaign. The reply was as direct: Viktor Yanukovych. The Russian president told this addressing the Youth Forum Seliger-2014, ten years after the event. At the time, he wasn’t sure it was Leonid Kuchma’s final choice. He asked him again as final arrangements were being made for the presidential campaign. Leonid Kuchma replied that the issue had been resolved and the final decision made, adding that he would appreciate Russia’s assistance in terms of information and political resources. Russia complied. 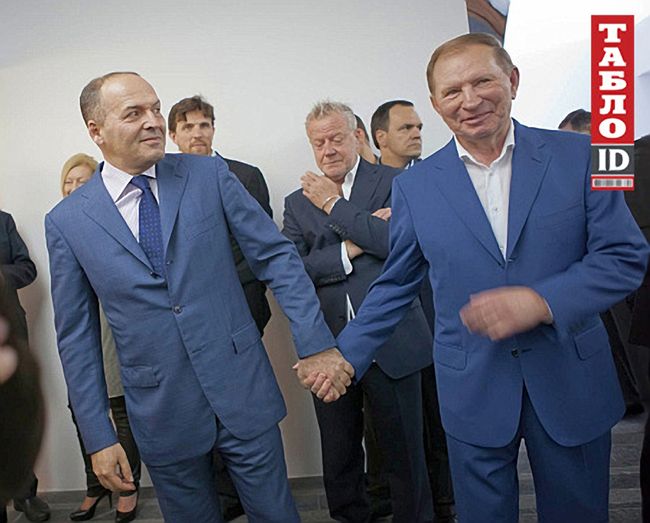 In April 2009, oligarch Viktor Pinchuk, son-in-law of the second president, and the Pinchuk Center played the key role in implementing the Family’s interests, using various projects and events, including the Yalta European Strategy (YES). Journalist Otar Dovzhenko told Den (Sept. 18, 2017): “I’m outraged to see politicians attend Pinchuk’s forum on a date marking the anniversary of Gongadze’s murder. I’d be hard put to assess each of these politicians, just as it’s difficult for me to evaluate [Yurii] Lutsenko’s conduct. I mean the degree of these politicians’ innate hypocrisy and cynicism. The question which we all must answer is: Why haven’t we worked out or found some viable alternative? Unlike many fellow countrymen, my memory is pretty good. I remember only too well what Kuchma is all about. However, the impression is that most Ukrainians have started forgetting – much to the pleasure of the existing regime, considering that Kuchma keeps officially representing Ukraine during the talks in Minsk, and that the man keeps using this regime to his advantage. A pretty good compromise for all those ‘upstairs.’ I think that it is the journalist’s task to keep reminding his/her readers of who Kuchma really is – and not only in conjunction with the Gongadze case. People used to come out against Kuchmism and shed blood, got arrested and killed. Kuchmism is a multifaceted phenomenon that haunts Ukraine to this day and prevents positive change.”