Little innovations for a big city

“We started our careers in business at about 30. And here, we see children who are only 12 to 16 years old, and they offer not mere ideas but ready-to-use solutions,” amazed investors say
Oksana Mykoliuk

Recently, the All-Ukrainian Children’s Hackaton “Techstars Startup Weekend IT Teens Kyiv” ended in the Ukrainian capital, its chosen theme being smart city technologies. Young students of technical schools offered innovative solutions to the important problems that concern the city’s residents. The idea of the competition is to get the participants to identify a certain issue and propose a workable innovative engineering solution in one to three days. Of course, team efforts resulted in models only, but the electronics inside these projects really worked.

The jury recognized as the best project one presented by the team of the Socrates STEM Study Center and called “New Mechanics of Water Use in the Sewers of High-Rise Buildings.” The second position went to the MakerSpace team from Lviv, which proposed a free software solution, a unique router that can be used anywhere in the world. The jury awarded the third place to the youngest team, which came from the Children’s Scientific Studies center in Kyiv and developed the project of a system that allows the driver to avoid improper parking. 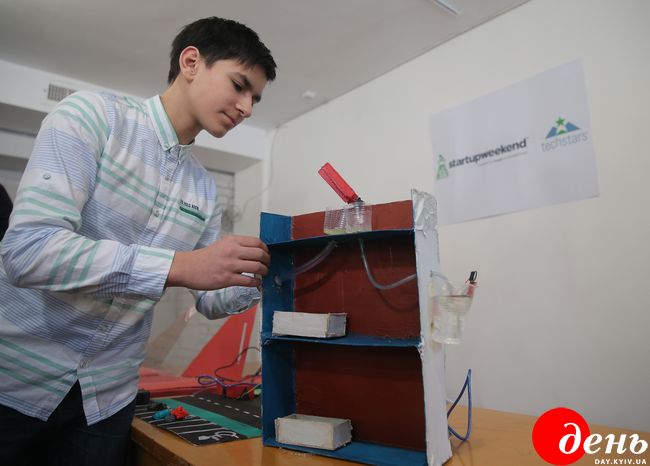 “Our project is aimed at re-using water,” said Roman Chernenko, an instructor of the Socrates STEM Study Center. “The kids have found data showing that in 50 years, this planet will face water shortages so dire that it will lead to a global crisis. They came up with a solution that allows high-rise building residents to save 30 percent of water they use now. The idea is that when new houses are being built, a new sewage system must be installed at once. Their solution requires rainwater to be collected on the top floor. Some of it flows down into the sewage system, while some goes into the upper toilet tank. On the lower floors, the system works like this: if the upstairs neighbor uses water, then the downstairs neighbor receives it already filtered into their tank, and some of it again goes into the sewage system. And so it works in the house, like a chain. Such a system saves water and solves many environmental problems.”

Easy access to the Internet is probably of interest to everyone. Member of the MakerSpace team Anna Dziuba describes their project: “We have created a router that provides the Internet to everyone. That is, it is such a SIM card that can fit everyone’s needs abroad. The router works continuously, with no roaming charges to boot. So, you do not need to buy phone cards of different operators on every trip abroad. There were predecessors of our project, but we offer some advantages of our own. We conducted a survey through Google Forms, and people wrote that this was a cool thing, they would buy it. We also discussed the possibility of developing a project with a US representative. He said he could help.” 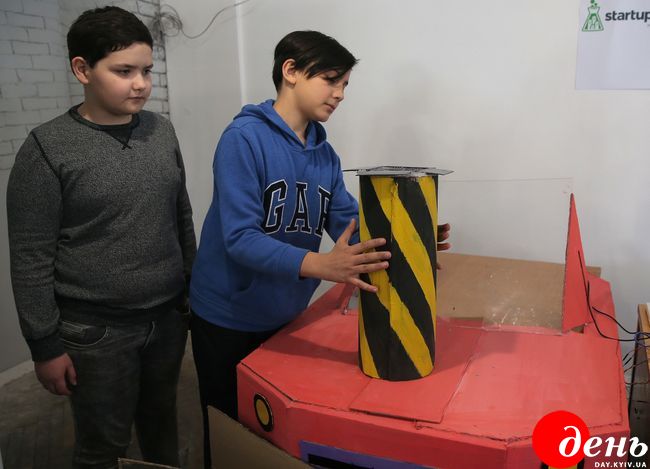 The youngest participants of the Hackaton, the Children’s Scientific Studies team, consider parking in big cities to be an extremely pressing issue. Besides the fact that parking spaces are limited, drivers leave cars in prohibited places.

“We have created special sensors that will record the distance between the bumpers at each parking lot and send this information to the administration. In this way, one can control where the driver stopped. According to the Ukrainian legislation, they can be fined for violating the rules,” member of the team Les Torhovets emphasized.

“THIS IS AN ADULT FORMAT, WHILE THE AUDIENCE IS VERY YOUNG”

Organizers of the hackathon say that the competition took place at a very high level: its participants used exclusively English, and needed to present a ready-to-use IT solution. Therefore, many willing teams could not participate. The next hackaton is planned for the fall.

“For the first time in Ukraine, the entire competition was held in English. The youngest participant is 11, the oldest is 16. It was an adult format, while the audience is very young,” said organizer of the Hackaton Kateryna Dehtiar. “Many people ask: what will happen to the projects afterwards? My answer is very simple: those who want to go further will do so, and those unwilling will not. But according to statistics, 10 to 12 percent of participants continue to work on their projects after a start-up weekend ends. The idea is to advance from the idea itself to the level where one can test the real demand for one’s project. We do it because Ukraine has a lot of technical talent, but business and marketing talents are somewhat lacking at the moment. Therefore, the formation of precisely such skills is important.” 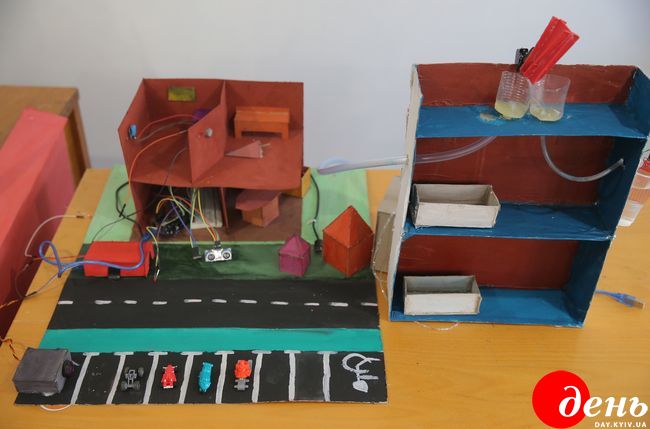 Coaches argue that in this format, children learn to apply their knowledge in practice, seek the required information, explore the world. This is a completely different approach to education, which involves the simultaneous study of mathematics, information technology, chemistry, engineering, etc.

The hackaton jury included business representatives, in particular, the special guest was Eamonn Carey, who serves as managing director of the Techstars London accelerator. Foreign visitors were impressed by the Ukrainian schoolchildren’s achievements. They were interested in the students’ designs and promised to contact the children for further cooperation.

“We started our careers in business at about 30. And here, we see children who are only 12 to 16 years old, and they offer not mere ideas but ready-to-use solutions. We are amazed, they have a great future ahead of them!” asserted John Sung Kim, an entrepreneur and investor from San Francisco, the founder of Five9.

The Ukrainian business community also paid attention to the event. For instance, the hackaton was supported by the Ternopil-based Ukrainian innovative company MagneticOne, which is engaged in web development and creation of services for e-commerce.

The goal of the Techstars Startup Weekend IT Teens Kyiv is to teach children to create an innovative business product, not just a technical solution.