"Our thanks to Gennady Vykhodtsev and Foxtrot Group for their help," - what were the first humanitarian routes of Foxtrot from Mizhhiria

In the first decade of April, the Foxtrot Group of Companies announced the first results of cooperation with the Humanitarian Center of Mizhhirya at the Mizhhirya Territorial Community in the Zakarpattia region. The Center for Humanitarian Aid helps Ukrainians to overcome the consequences of the Russian occupation, accumulates humanitarian aid from all over Europe, which the social partners later transport to Kharkiv, Kyiv, Chernihiv, Kyiv Region, Zaporizhia, and Sumy Region.

On April 8, the Foxtrot Group of Partners, as a partner of the Center, facilitated the delivery of humanitarian aid from Spain to the Intermountains, from Eventos Ucranianos en el País Vasco in the Basque Country. Ukraine has received generators, food, hygiene items and other essentials from the Spaniards - a total of 28 pallets of cargo with a capacity of 90 cubic meters.

Closing the issue of international transportation of goods from Spain, Foxtrot Group organized the assistance of the partner company "Presto" for the transportation of humanitarian goods in Ukraine. The first domestic route ran from Lviv through Mizhhirya to Zhovti Vody. The Foxtrot truck brought mattresses, bedding, food and medicine to the community in Dnipropetrovsk region, which borders Donetsk region and hosts immigrant families.

Another car with humanitarian aid at the initiative of Foxtrot went to the residents of Trostyanets, which had recently been liberated from occupation. 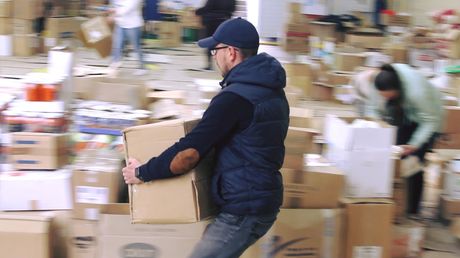 - Trostyanets in the Sumy region suffered a lot during the month of occupation. Many houses, a hospital and a railway station were destroyed. But no one will destroy people's desire to live. So, our today's cargo, thanks to the cooperation with the Foxtrot Group of Companies - the desperate residents of this glorious town. Cereals, pasta, canned food, water, hygiene items, pet food - all on the way! - reported the Center of Mizhhirya on its Facebook page. "Our thanks to Gennady Vykhodtsev and Foxtrot Group for their help."

In addition, with the help of Foxtrot, the Center sent the medicine to the Volunteer Hundred "Volunteers" in Kyiv. Volunteers will hand over painkillers to the capital's military hospital.

It will be recalled that on March 26, Gennady Vykhodtsev, Director General of the Foxtrot Group Management Company and Chairman of the Board of the Center for Regional Development and Innovation Center Mizhhirya Kateryna Slavets signed a Memorandum of Cooperation and Interaction to Overcome Russia's Aggression against Ukraine and the establishment of the principles of independence of Ukraine. The partners agreed to cooperate in the issues of prompt receipt of humanitarian aid to the Center in all regions of Ukraine.

During the first month of the war, Foxtrot paid UAH 22.44 million in taxes to the state budget, of which UAH 5 million was a tax advance. And the amount of assistance provided by the retailer to the Armed Forces, rescue services, terrorist defense and volunteers is already 7, 5 million USD.