Can you imagine a full house at a popular science conference? Such that the tickets for one of its days were sold out a week before it even started. Well, how could it be otherwise when the speakers included experts from NASA, the Mars Society, the Copernicus Center, and leading Ukrainian scientists?

So, the first day of the INSCIENCE popular science conference took place at the ArtHall D12 space in Kyiv on September 13. The title can be deciphered as “innovations + science.” The conference is just one direction of a major project of the same name, founded by Olena Skyrta and Anna Oriekhova. The project aims to popularize science, unite academics and business community, and create conducive conditions for the development of innovations.

CHOOSING WHERE TO FLY

During the first day, visitors had an opportunity to listen to presentations on space, astrophysics, bio- and nanotechnology. For instance, the first speaker was Jakub Bochinski – Polish astrophysicist, head of the educational laboratory at the Copernicus Science Center in Warsaw, and Poland’s representative on the Education Consultative Committee of the European Space Agency. He explained why the humanity needed to explore exoplanets. Incidentally, that same evening, Bochinski had a discussion with founder of the Mars Society Robert Zubrin, who advocates the idea of colonizing Mars literally in several decades from now.

In parallel, an exhibition of high-tech startups and inventions made by both private companies and branches of the National Academy of Sciences of Ukraine (NASU) took place on the location. 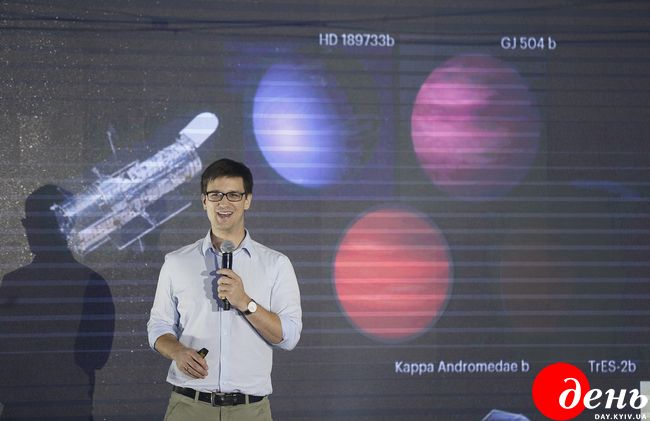 The next day’s planned events included speaker-led workshops dealing with fundraising, looking for grants, presenting projects and writing for cool academic journals, as well as pitching of startups and inventions, all of them to be held in the UNIT.City innovation park.

TO PREVENT CHOKING ON THE FUMES

In a break between the eminent speakers’ presentations, The Day’s reporter talked to participants of the high-tech startups and inventions exhibition.

A small rectangular device with a screen, wires and a cap that is worn on a finger – this is a gadget that can help a physician determine the degree of carbon monoxide poisoning. “It is actually carbon monoxide, which mostly enters the human body with the fumes,” clarified Serhii Mamilov, the academic secretary of the NASU’s Institute of Applied Problems of Physics and Biophysics, who has been studying this topic since 1995. “Carbon monoxide poisoning is very hard to deal with, because there are no external signs. The level of carboxyhemoglobin, which blocks the supply of oxygen to cells, rises, so the body disconnects these cells. People say that somebody ‘has choked on the fumes.’ During such a poisoning, the person goes to sleep, then full hypoxia sets in, and death comes. Pathologists even say that after such a poisoning, the dead person has red-colored skin and looks like they are still alive.”

When it comes to extinguishing a fire, it is important to quickly determine the degree of the victims’ poisoning and to monitor the condition of the emergency responders. “And here we have developed this combined device that non-invasively assesses the level of carboxyhemoglobin in the blood, the status of the cardiovascular and respiratory systems, and also has sensors determining the presence of CO in the air, including one exhaled by somebody. This is an option for a physician needing to determine the condition of the victim. We also planned to make a smaller device which would be attached to the firefighter’s ear, and would start beeping at some point, signaling that they have already inhaled too much of carbon monoxide and must leave the room,” Mamilov added.

Scientists told the State Emergency Service about the device that measures the degree of carbon monoxide poisoning. “They say ‘it is good, but we have no money,’” Mamilov told us. “The device must be certified, and it costs money. Academic institutes do not get any money allocated for such purposes, as we are only allocated money for research. We have not found anyone willing to invest in it, even though there is only one mass-produced device in the world that measures the level of carboxyhemoglobin in the blood, and it alone. Ours measures more parameters. So we are trying to promote this design, have been entering it in various exhibitions, and our military has shown some interest as well.”

The EOS Platform company creates analytical tools to help clients get real-time images and analyses of satellite and other Earth observation data, which can be used for research as well as for business and public administration purposes. The company is headquartered in Menlo Park, California, but the team is to a large extent Ukrainian, while designers and most of the research department are located in Ukraine.

“We coordinate our activity with our head office in California, there are our representatives there who help promote the product in the Western market and track global data management trends, they also can help us set right priorities when designing our products,” said Mykola Kozyr, coordinator of one of EOS Platform’s projects, namely Vision. The Vision team develops toolkits for working with vector data, deals with visualization and analysis of vector data in a browser. “Vision is a website where one can add one’s information either in a convenient vector data format, or in the form of a regular Excel spreadsheet with coordinates,” Kozyr described his project. “In the browser, one can immediately reproduce this data, stylize it, or make a spatial query using a common interface. One can also make a thorough analysis of data and distribute a map that will be available as a single link for all Internet users. Effectively, it is a browser toolkit that allows one to quickly create high-quality vector maps.”

Vision has an immense potential market, including businesses, primarily small and medium-sized ones, government organizations and NGOs. Actually, it is everyone who has data that needs to be analyzed and stylized. “One example of its use is cooperation with relevant ministries of Ukraine, we are establishing contacts right now,” Kozyr noted. “Decentralization is going on, new united communities are being formed, and with the help of our project, it is possible to display them on the map, add statistical indicators, like the number of residents, the level of accessibility of the Centers for Provision of Administrative Services, etc., and analyze it.”

Deputy director of the Scintillator Institute (part of the NASU’s Institute for Single Crystals research and technology complex) Oleksandr Sorokin shows organic dyes, in particular ones for fuel, a substance protecting vegetables and fruits and enabling them to be stored for a long time, special materials made of artificial sapphire, which is the second hardest mineral, right after diamond, so one can make of it, say, protective screens for smartphones and bullet-proof windows for armored personnel carriers. All these are being developed by the Institute for Single Crystals.

A dedicated exhibition on the stand shows scintillators that can effectively register various kinds of ionizing radiation: gamma, X-ray, ultraviolet radiation, etc. Meanwhile, a plastic scintillator that had been developed at the Institute was used in the development of one of the Large Hadron Collider’s detectors: Sorokin showed us a commemorative medal sent to the Ukrainian scientists as evidence of their contribution to the experiments which saw the facility discovering the Higgs boson.

Materials based on Kharkiv-developed microcrystals that absorb X-rays well are used in manufacturing introscopes which are employed to scan your suitcases at airports and checkpoints. Sorokin noted that the Institute for Single Crystals’ developments are used at airports in Europe, and now such materials are in great demand in China.

The research and technology complex also works with nanotechnologies. Sorokin showed us a set of colloidal nanocrystal oxide solutions that may be useful in biomedicine. For example, some of them can be used as effective antioxidants.

Through introducing its developments into practical fields, including abroad, the Institute for Single Crystals can attract additional funds and use them, in particular, to support young scientists.

“Almost all the scintillators we develop are exported,” Sorokin emphasized. “They are needed for a variety of detectors, but can also be used in high-energy physics facilities, such as the Large Hadron Collider, as well as for introscopy and subterranean geological prospecting. So, although this product line is a special one and Ukraine is a small market for it, we have filled our niche and compete with global leaders’ developments.”