SENSTONE BECAME THIS YEAR’S NOVELTY AT THE KYIV FASHION WEEK. SEVERAL MONTHS LATER THE DEVELOPERS ARE PLANNING TO LAUNCH A CROWDFUNDING PLATFORM TO ATTRACT INVESTMENTS

SenStone – the pendant that can convert voice to text and sort it – looks very stylish. With a diameter of 2.9 cm and a weight of 26 grams, it can be worn on a chain or pinned on to your clothes like a brooch. A quite capacious chip allows it to synchronize with your smartphone and identify 7 languages and memorize 30 minutes of dictation. The precision of deciphering is around 97 percent. This piece of jewelry can sort texts by topics set by the owner.

Besides, SenStone can react to voice commands: for instance, write a post on Facebook or make an entry in a blog.

At present the project is being developed on the basis of IoT Hub accelerator in Kyiv. 150 prospective customers have pre-ordered the pendant online (at senstone.io). The price is estimated at 120 US dollars. 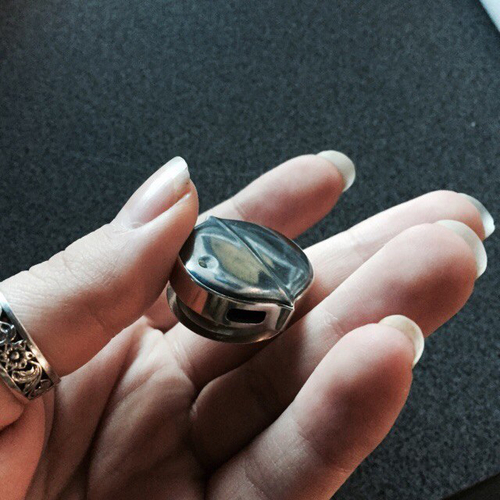 THE DEVICE CAN NOT ONLY CONVERT RECORDED VOICE INTO TEXT NOTES AND SORT THEM BY THE TOPIC, BUT ALSO SEND DIGITAL MESSAGES VIA A SMARTPHONE

The idea of the smart pendant was conceived by Nazar Fedorchuk (Lviv), formerly employed by the US Embassy in the framework of the US Department of Justice program for Ukraine. 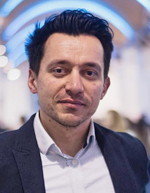 The Day talked with Fedorchuk about his team and the story behind the creation of this technological breakthrough in the world of fashion, as well as about Ukrainian prospects in the field of the Internet of Things (IoT).

“I had been studying innovative projects for quite a while, because I realized that classical business, as it is seen in the modern world, is actually a bit boring. It often repeats the already working models. Even abroad an existing successful pattern is often transferred to another geographical location.

“On the contrary, I wanted to do something more innovative. Technology is like mental cycling: it lets you accelerate. In fact, the things that seemed complex are doable.”

How did SenStone project come into being?

“The idea was conceived a year and a half ago. And it seems that it was triggered into realization by the identification of the problem.

“Personally I have had trouble with notes. There is a constant risk that they can be deleted from the cell phone. I have used several special note apps, and that without considering all the papers which I constantly carry around with me, everywhere, and a lot. I realized that there was no easy way to write down a simple idea on the go, no matter where you are. This prompted a desire to create a simple solution, with one button replacing a sequence of unnecessary actions. With time, this idea took this particular shape.

“Later IT experts joined in, who proposed technical solutions for the project. Also the designers, thanks to whom we found what I believe to be a felicitous niche for the gadget: a stylish ornament. Programming, development, and manufacture of the boards are also done on our own, by the experts involved in the project.”

How many people are actually working on it?

“The main team consists of me and my partner Vadym Sviatnenko. All in all, it is more than 10 people. I would like to emphasize the special role of the designers: Vitalii Kyryliv and the design bureau ‘Khochu raiu.’ Taras Voitovych and Zhanna Yuskevych are in charge of IT. These people deserve deep respect for their contribution to business. Thanks to Vitalii Bilan and Oleksii Oliinyk, we were able to squeeze the gismo into a brooch or a pendant. Moreover, we have a couple of consultants abroad: Aleks Neskin, Anton Karpolan, and James Huang.”

What makes SenStone stand out among the products already on the market?

“Everyone knows Apple Watch that, too, offers a possibility to make notes.

“But we are working on an ornament which distracts the user from his or her phone. In moments of creation, you will concentrate on important things. That is exactly when our subconscious prompts us the optimal solutions.

“A similar invention has been developed in California: a gold bracelet with an alarm button. It allows you to transmit information about your location, call for help, or send a short message. But this is a horse of another color, such a device is quite expensive. We are trying to find a balance somewhere in the middle, between jewelry and plastic mass production items.”

Which markets are you considering for your product?

“We are looking at the global market. We would prefer to develop in Ukraine, but the US is a huge market, and this is a country that loves innovation. Language is a very important factor, too, which opens doors to certain markets. At the moment we have 10 available languages, including Arabic. We are currently working on the synchronization of SenStone with iPhone, which would serve as a screen for reproducing text. These are the potential markets. However, for iPhone we have no Ukrainian version for the time being, only Russian.”

Are you also working on a version for Android?

“This is in the cards, but it won’t be happening soon. Maybe, we will do it by the end of the summer. In June we want to present an iPhone-compatible working prototype.

“We are trying to move ahead fast, but to some extent this depends on the level of funding and the degree to which it would enable us to develop fast.”

How did you attract investments for your project?

“So far we have done everything on our own, without any investors involved. But we are interested in investments and are considering such opportunities. This summer or fall we are also planning to start a crowdfunding platform. In any case, we would like to know how potential users will react, and we are looking forward to getting feedback from them.”

How do you see Ukraine’s prospects in the development of IoT?

“Internet of Things is one of key trends for at least a decade to come. Actually, Ukraine has great capacities. We have a large, unrealized potential and lots of engineers capable of realizing it.

“However, in Ukraine I met with a certain restraint towards innovation and change. A few people who had worked on SenStone left later. And it seems to me that we lack a well-develop startup culture.

“But we are moving in the right direction, albeit not so fast.

“For example, now we can get an idea in one country, develop the code in another, produce it in a third, and present in a fourth. For example, we have advisors who geographically are abroad, but we maintain close ties. Geographical borders are being eroded thanks to technology. Everything is close at hand.”

What problems could you get in this respect? According to surveys, internet coverage in Ukraine is 60 percent, while access to the internet is a key condition for the development of IoT.

“Sixty percent coverage is not enough. We need full 100 percent. People need to have the opportunity to get an internet connection, and it is up to them to decide whether to do it or not. Again, everything depends on technology. In the US there is a startup whose founders arranged with a radio station to use radio frequencies and beam internet connections. Something like this is necessary in Ukraine, but this requires openness on the part of the National Council for Television and Radio Broadcasting. It seems to me that a mental transformation needs to take place.”